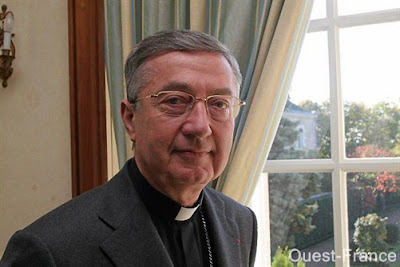 Archbishop Jean-Louis Bruguès, is the former bishop of Angers. He is Secretary of the Congregation for Catholic Education, which oversees Seminary formation, as well as being Vice President of the Pontifical Work for Ecclesiastical Vocations and a member of The Commission for the Formation of Candidates for the Priesthood.

In a speech to the Rectors of Pontifical Seminaries addressed many of the issues that seem to concern me, and I presume readers of this blog. It certainly addresses issues that cause serious concern to some of Roman seminarians, especially in those seminaries whose staff cling to the beige culture of 1970s. It also has implications for parish life.

.... in fact, we have experienced or even fostered an extremely powerful self-secularization in most of the Western Churches.

The examples are many. Believers are ready to exert themselves in the service of peace, justice, and humanitarian causes, but do they believe in eternal life? Our Churches have carried out an immense effort to renew catechesis, but does not this catechesis itself tend to overlook the ultimate realities? For the most part, our Churches have embarked upon the ethical debates of the moment, at the urging of public opinion, but how much do they talk about sin, grace, and the divinized life? Our Churches have successfully deployed massive resources in order to improve the participation of the faithful in the liturgy, but has not the liturgy for the most part lost the sense of the sacred? Can anyone deny that our generation, possibly without realizing it, dreamed of a "Church of the pure," a faith purified of any religious manifestation, warning against any manifestation of popular devotion like processions, pilgrimages, etc.?

He speaks of the need for depth rather breadth of formation. The importance of formation in the doctrines of the Church. He ends by speaking of the divide between the older generation of priests and those who are now being formed.

The first leads us to observe that secularization includes values with a strong Christian influence, like equality, freedom, solidarity, responsibility, and that it should be possible to come to terms with this current and identify areas of cooperation.

The second current, on the contrary, calls for keeping distance. It maintains that the differences or points of opposition, above all in the field of ethics, will become increasingly pronounced. It therefore proposes an alternative to the dominant model, and accepts the minority opposition role.

How can harmony be fostered between educators, who often belong to the first current, and the young people who identify with the second? Will the educators continue to cling to criteria of admission and selection that date back to their own time, but no longer correspond to the aspirations of the young? I was told the story of a French seminary in which adoration of the Most Holy Sacrament had been banned for a good twenty years or so, because it was seen as too devotional: the new seminarians had to struggle for a number of years to have it reinstated, while some of the professors preferred to resign in the face of something that they judged as a "return to the past"; by giving in to the requests of the younger men, they had the impression that they were renouncing what they had fought for their entire lives.

Goodness, that was straight talking. I hope young men considering a vocation do their homework and avoid these dens. What an awful state of affairs.

Without that deep sense of the Divine and Spiritual at the heart of which lies the adoration of the Most Blessed Sacrament, we have nothing.

Without a firm belief in the Eternal reality of what our Glorious Faith is actually all about, you may as well go and join a local social club.

Bring back a strong focus on the Sacred in all Liturgy, Catechesis and Formation. This is the essential duty of every Parish Priest, of every parent and every Catholic School.

A very good post. I would urge all bloggers seeing this to provide a link or to report on the matter themselves.

The last sentence effectively summarises nearly all the hostility to tradition, from within the Church, for the past 40 years.

Well said, Archbp Brugues, and tnank you Father, for posting details from his address. It is like a breath of fresh air, honest, realistic, courageous, and offering real direction for the spiritual growth of our priests, and subsequent revitalising of our Catholic faith. Our Lady, Seat of Wisdom, pray for our Church.

I think the problem with a (wonderfully eloquent and splendid) speech like this is waiting to see what is going to happen next. Sooner or later, one or both sides will have to remove gloves or we'll end up in the same miserable status quo we've endured for so long.

So adoration was restored, and those on the teaching staff who opposed it resigned?

Excellent; sounds like killing two birds with one stone to me!

He must have been reading Edward Norman. It is good common sociological sense. To strive to be a social service organisation and to marginalise the Almighty is death to any ecclesiastical organisation.