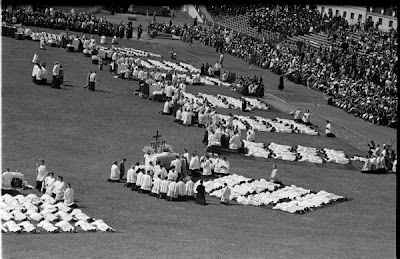 I had often seen this photograph realising it was an ordination to something, at last NLM has given the answer.

...they show the simultaneous ordination of 842 Priests which took place at the XXXV International Eucharistic Congress of Barcelona in 1952. In the Olympic Stadium of Montjuich, 21 altars were erected, at which 21 bishops celebrated synchronized Masses during which they ordained about 40 priests each. The bishop of Barcelona, Mons. Modrego Casáus, celebrated at altar 12, and his voice was amplified by microphone throughout the stadium. In the middle, a schola of 300 seminarians from all across Spain led the people in chant.

It's a good job the weather was dry.

Back in the bad old days...

Synchronised Masses - the correct way. Not concelebrated please note. And they were the good old days, I was around then.
We had full churches, few divorces, many baptisms etc.
Still, brick by brick we are picking up the best of what we had then.