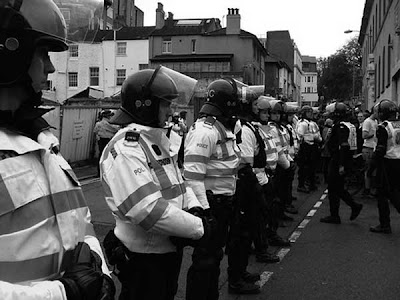 Was Prezzer in Harry Ramsden's snarling over a double cod and chips? I am sure I saw Harriett Harman coming out of Primark and a couple of junior ministers in one of Indian Restuarants in Preston Street looking stressed. On Sunday there was an unusual number of suits in the congregation. It is the Labour Party Conference in the parish.
Amongst criminal classes of the city, now is the time for crime and disorder anywhere above or beyond Western Road, down there around the Grand Hotel and Conference Centre you can't move for armed police, bollards, pavements are restricted, its a fortified city. There are boats with policemen in them off shore and presumably the ship on the horizon has missiles at the ready. The sky is empty off the planes that normally go to or from Gatwick.
How different from the days when my uncle had a nice conversation with Mr Atlee and his detective on the tube, or when boys would be photographed standing on the pavement outside No 10.
I know we have had the Brighton bomb and other terrorist outrages but how society has changed, and yet until recently the Queen used to be met out riding or driving on her own in Windsor Great Park.
at September 29, 2009

In this age of mobile phones "Al Qaeda Flash-Mobs" can be conjured up from thin air in an instant.Thousands of layabouts and ne'erdowells are always available to demonstrate against all and everything,the majority can barely read and write.

We can't blame the Police for taking precautions however inconvenient it is to the rest of us.

What a pity the visitors are not being protected from the RIP-OFF prices being charged in the Pubs especially as they seem to be excused from displaying prominent price lists as they are supposed to by LAW.

That's your perception but in practice it's not like that at all. Have you actually been down there to any of the events? You can go to any of the fringe events without a ticket, conference pass or being appropriately dressed (i was wearing old jeans and a hoodie at Mandelson's talk yesterday at the Old Ship and no one looked twice at me)- and if you choose a sponsored event they have free food and drink. And if you try and talk to the bored Met Police standing next to the Brighton centre, i think you'll be pleasantly surprised. Go on the Labour party website and look at fringe events and go to something. Unfortunately you missed the Humanist 'no prayer' breakfast with Polly Toynbee - that was this morning.

Queen Victoria was shot at on at least two occasions,whilst out riding in her carriage,I seem to recall(obviously from a book I read,not the actual events themselves).The human heart remains constant in it's deceptions/intentions through the centuries.It is only good men doing something,that seems to keep us relatively safe from evil being allowed to flourish(I know it's more politically correct to say good 'people',but I'm not in a very politically correct mood today,the papers having annoyed me).

"It is the Labour Party Conference in the parish.

Amongst criminal classes of the city, now is the time for crime and disorder anywhere above or beyond Western Road,... "

PArdon me all to heck and begone for giggling at the juxtapostion of the above two sentences.

Socialism is a wonderful idea, until those thugs run out of other people's money. Then they stick a gun in your face and call it what it really is: Communism.

Are they really worth blowing up? They seem to be doing an excellent job of self-destruction.

One evening in Paris in the early 90's I was outside a restaurant near the Ile de France looking at the prices, when Francois Mitterand, then President of France, sauntered inside with just the one detective accompanying him.

My French colleagues assured me that that was not unusual.

That also was the case in Sweden until 1986 when the PM Olof Palme was assassinated on his way to the movies - unaccompanied.

... and possibly still is. But then the country doesn't hate the Queen.

More seriously, I think this is about the self-importance of politicians rather than any significant reduction in the security risk.

A young friend of ours spent hours getting back home to Brighton yesterday, could the reason be this conference.
They should allocate a hidden bunker out in the middle of nowhere for these conferences to be held.
It seems like a self propogating system. The more we increase security, the more fear there is, the more likely someone is going to try and cause problems.

Elizabeth:
"They should allocate a hidden bunker out in the middle of nowhere for these conferences to be held."

...and then lock the door and not let them out again!