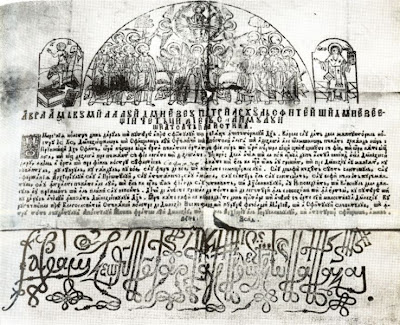 An 18th-century absolution certificate granted by the Greek Patriarch of Jerusalem.

I was talking about Indulgences the other day you could see on the faces of some of the congregation that look of "that is pre-VII" and then a look of perplexity when I suggested people read Paul VI's Indulentiarum Doctrina, the Apostolic Constitution on Indulgences, every Catholic should read it. It is perhaps the most authorative document on the Atonement since Trent.


Indulgences go back to early times when those about to suffer martyrdom would be asked to unite their with those of public penitents later holy hermits were asked to do the same.
at September 08, 2009

It is such a shame that so many of the old plenary indulgences were taken away under Paul VI. We may question his liturgical reforms, but the drastic removal of so many indulgences must have had a great effect on souls; both here, but more terribly so in purgatory.

It's as if the entire Catholic survival kit has been reduced to a minimum, and not only indulgences. Haven't a lot of the tools Catholics relied on for centuries and that were personally very helpful to them in their spiritual battles or when muddling through disappeared from the public life of the church? It's as though part of Catholic identity has been deemed irrelevant and kitsch. Indulgences are such hopeful things.

Ah Jackie, You have read the Greek of the Patriarch's indulgence - clever!

I have lived in Norway for 11 years. Indulgences are never mentioned here and if so, in a negative way. In my homeland, Czech republic, are indulgences well known and used. Priests preach about them every November. The information is often placed in the church entrance, too. This summer I saw in every church of my home town a big paper with info about "year of priest - indulgences".