Reform of the Reform: Summorum Pontificum a model 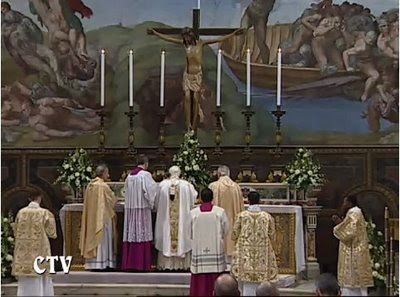 It looks as though the rumours about a "Reform of the Reform" are true. I had a journalist on the phone yesterday from one of the nationals asking about it. I don't think he read this story.
There were lots of rumours last year about Rome refusing to renew the indult for deviation from the Church's norm of communion on the tongue, kneeling. There was talk about using Latin for sacramental formulae. Documents like Sacramentum Caritatis reminded us that things like the communion plate were still to be used, that music was supposed to be chant or polyphony.
The signs the Holy Father has been giving; the way he gives Holy Communion, his choice of vestments, the occassional public -always private- ad orientem celebration of Mass, the type of music that is chosen for his public Masses seem like bricks placed ready for building. His encouragement of the Traditional Mass with Summorum Pontificum is yet another factor.
People like Frs Lang -from the London Oratory- and Bux have been appointed to the CDW both of whom have written and speak on the importance of ad orientem worship and the importance of Latin, of the celebration of Mass within a traditional framework. Cardinal Arinze and Archbishop Ranjith the head and deputy of the CDW spoke of the importance of reverence in the Mass, of adding and subtracting nothing from the Rites. The dimunutive -small men tend to find ways of getting themselves heard- Cardinal Antonio Llovera Cañizares, known as little Ratzinger because of his commitment to everything the Pope teaches is now the liturgy supremo.

My point is that there are documents already in place, there are people in place, there are models in place the big problem as always is that no-one is listening or looking at the signs.
Cardinal Antonio Llovera Cañizares problem is how to communicate what is there. New legislation imposed with force will do little, except to distance the disobedience. More rebellion is hardly good for the Church.

I have said before on this blog, I think the way forward is shown in Summorum Pontificum. The Pope is not a creator of tsuanamis in the Church but of gentle movements. In Summorum Pontificum he lays the blame for the Traditional Mass not being celebrated at the feet of Bishops, he places the choice of celebrating it in the hands of individual priests, the bishop has the pastoral responsibility of ensuring the Church's rites are made available to God's people, it is not their role to restrict them or to alter them but to ensure they are celebrated according to the mind of the Church.
I suspect that if the Prefect of the CDW issues a document, it will be be to remind bishops of their proper role of oversight rather than alteration of the liturgy, as the Holy Father has already done in SP, and possibly to remind them of what the documents already say, and what is commendable in the proper celebration of the Church's liturgy.
The Holy Father is conscious that he is elderly, that any beneficial change will be gradual and take at least a generation to take effect, what he is concerned about is putting the building blocks of "Reform" in place. What we do not want is change based on papal whim or preference, which will not be lasting and possibly swept away by a successor but something based on clear law and documentation.
at September 09, 2009

Last year I was fortunate to attend an early morning and an evening Mass at The Holy Name, Manchester - very well attended. Celebrated at a side altar, of course, Ad Orientem. Frs. Matus and Hilton are doing a fine job there, not to mention the Sunday afternoon TLMs.

The holy father has given a real way forward in summorum pontificum. If he retracted the moto proprio for communion in the hand it would be widely ignored and this would hand a coup to those who want the pope & vatican to be a titular figurehead with no real power.

then on day one nothing much would change, but the ripples would start to spread and reach the edge of the pond within a generation.

I guarantee that if I asked any church-goer at a nearby church to me about Summorum Pontificum, they'd stare at me blankly. It's going to be hard work to ''rehabilitate'' the average Catholic.

I think the best way of phasing out communion in the hand is not to retract the present indult, but instead to go the round-about route of making kneeling for communion mandatory, with the tongue/hand reception options left in place (for now). Trendy liturgists would hyperventilate about this but I doubt there would be a lay revolt as long as the hand option would still be freely available.

Kneeling is a much better posture for receiving on the tongue for purely practical purposes, quite apart from the greater reverence of the action. If people kneel down, they need a place to kneel and also a support when they stand up -- so the altar rail would make a gradual comeback.

After 10 or 15 years of mandatory kneeling, the sense of the sacred will be re-instilled and communion on the tongue will make its own comeback without having to be imposed. When that happens, all of today's We-must-stand-and-receive-in-the-hand-because-we-are-in-a-"procession" fantasy will wither away.

Patricius said "It's going to be hard work to ''rehabilitate'' the average Catholic."

I don't really understand all the ins and outs of form and preferred rites etc. I do know this. Since starting to pray the Rosary I have become much more alert at Mass,not to the way the Priest does this or that but to the presence of God and what is taking place on the altar. I find it overwhelming at times and to be honest rather intense,having always had a rather ambivalent attitude in the past(eg been to Mass,done my duty etc).Regarding the Priest saying Mass,I am beginning to appreciate his role and sacrifice of his own earthly ambitions for the sake of the care and ongoing protection of my soul and others of course. This must be how Our Lady views her Priests as why else would these thoughts be occurring to me? The Rosary is a soil of preparation for true observance at Mass,I am sure there are other ways for the soul to be prepared but for this particular sinner,the Rosary is the key.My receiving of Holy Communion has altered dramatically too,I really mean the "Lord I am not worthy"prayer when I say it.I don't have the right articulation and my latin is at 'Delboy' level but Mary is changing me.I stopped saying the Rosary for eight days and all heck broke loose.I learnt my lesson,please God.

We were told we could not receive communion in the hand because of swine flu. I think the rule has been applied in the whole of Sweden. We were not to make the sign of peace, that only the Body of Christ would be distributed at Holy Communion, and not the Blood of Christ, and that Communion would be given on the tongue, not in the hand.

Hopefully that this will be the last we shall see of these practices here at least.

What next? Can we expect to be asked to receive Communion whilst kneeling, to avoid infection? Should the Priest not be facing the same way as the congregation (ad orientem), again, to avoid infection? And would it not reduce the risk of infection if the Canon of the Mass was recited silently?

And whilst on health and safety matters, should the altar rails go back so as to get rid of the trip hazard due to the sanctuary step? Otherwise the step will have to be marked with yellow tape which would not be nice.

Bishop Arborelius of Stockholm is a Carmelite and a good thing, in my opinion. He is not an archbishop but in view of his position and the leadership he has given he should be considered for a Cardinal.

In Spain the father's last name comes first followed by the mother's. The Vatican will continue to use his proper name and so should you.