Patriarch of Jerusalem in London 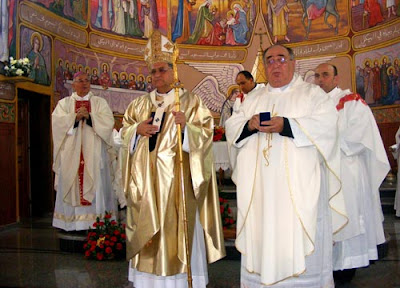 CNA The Latin Patriarch of Jerusalem, Archbishop Fouad Twal, said recently that the future of Christians in the Holy Land is unsure, unless Christians in the rest of the world take concrete steps to sustain them.

In a conference organized by Aid to the Church in Need (ACN) at the Cathedral of Westminster in London, Archbishop Twal said last Tuesday that emigration has drastically reduced the number of Christians in Israel and Palestine.

The 10,000 currently in the region could drop to 5,000 in 2016, he said, warning that the pilgrimage made by Benedict XVI in May has not yet lead to the “breather” that the minorities need. “Discrimination today in Israel threatens both Christians and Muslims,” he stated.

Referring to the wall in the West Bank that prevents Palestinians from have access to basic needs such as health care and education, the Patriarch said, “We have a generation of Christians who cannot visit the Holy Places of the faith that are just a few kilometers from their places of residence.”

During a Mass he celebrated earlier, Archbishop Twal thanked ACN for its untiring support. “We count on you and your collaboration. Without you what would our future be?” he said.

After warning of the grave crisis that many Palestinians face, he remarked that it seems “politicians are more afraid of peace than of war and prefer to manage the conflict instead of solve it.”

In the occupied territories, the people “are completely at the mercy of the Israeli army, and currently in the Gaza Strip people live under the strong arm of Israel which has created a drastic humanitarian crisis,” the archbishop noted.

During his visit to London, the Latin Patriarch met with bishops of England and Wales as well as with other organizations such as the Knights of Columbus and the Order of the Holy Sepulcher.
at September 15, 2009

I take it this is from an American website: Cathedral of Westminster? Knights of Columbus?

The harsh reality is that Israel's only interest in Christianity is to run the Holy Places commercially as religious theme parks with as little realistic content as possible. The plight of the Christian Palestinians is one of the most serious in the world. But their lack of political clout means that few are interested.

Aid to the Church in Need supports Christians in Palestine in a focused way that helps retain their dignity. Their site is www.acnuk.org . I have used them before, and it is a well-organised and easy-to-use shop.

Last year they sold Christmas cards based on designs made by Christian children in Bethlehem. They are lovely and heartbreaking at the same time. I still have some. This year I note they are selling handcrafted rosaries by local Christians, which are lovely (Look at the shop pages).

I will not disrespect CAFOD's efforts in Israel, but will point out that they have chosen a different priority as can be seen from their website, and their target seems to be more diffuse. Since reading this and other priests' blogs I now think really carefully about which charities I support, and what their agenda is.

e.g. Christian Aid I will NOT personally support (despite the embarrassment of fielding the lady next door with whom I sing in an ecumenical choir). I dislike their partisanship in their dealings in this area (and also their condom policy elsewhere).

The truth is that Christians are emigrating from the Holy Land because of savage Muslim oppression. Where has the most dramatic drop in Christian communities been? In areas under Palestinian control. Bethlehem, once a thriving Christian town under Israel sovereignty is now effectively Christian-rein. The only ones left there are those who cannot escape.

And it is only since Israelis got control of Jerusalem in 1967 that Christians - or any non-Muslims - enjoy unlimited access to their holy sites, which the Muslims had restricted, and in many cases, systematically desecrated. It is thanks to Israeli laws that Christians have the right to worship freely - and not thanks to the Muslims.

It is high time Christian leaders acknowledged the truth, started protecting their own against Muslim aggression and stopped supporting policies that in the long run will only lead to further persecution of Christians in the Middle East at the hands of Islam.

My memory of things is hazy of any historical occurance beyond 10 minutes ago. Help me out here, but I vaguely seem to remember the Church of the Holy Seplacur being overrun by not Israeli Army hordes, but those "peace loving" Mussssslims. The ones who used the holy place for a toilet, and the same ones who reek terror on people who want no part of violence.

why should the Israelis have to put up with it?

The Patriarch is an Arab and naturally supports the Arab political cause in the area, indeed his position would be impossible if he did not. While taking his judgments on politics with a pinch of salt one can applaud his attempts to keep alive Christianity in areas such as Gaza which is under the control of a group which does not recognise Israel, vows unrelenting war against it, and which has little time for a non-Muslim. There have been cases of Christians arrested for "insulting the Prophet".

My wife and I were there last week for Holy Mass at Westminster Cathedral and to listen to Patriarch Twal later in the Hall. He is a wonderful man and a true leader of the Catholics in the Holy Land doing as much as he physically, mentally and spiritually can to help His people.

We should do as much as we can to help our Catholic brothers and sisters in the Holy Land. While we lounge around in our armchairs complaining about the TV programme and that there's no more Cola in the fridge, Catholics in the Holy Land are being driven from their homes, their land, they are being taxed out of existence, they are heavily discriminated against and of course vicious attacks on the people and their property continue almost unabated as the authorities do less than nothing to stop this.

ACN do terrific work in many areas of the world not least of which is in the Holy Land - bringing help directly where it is most needed. Support them.

God Bless the Holy Land and all who live there - may they find peace soon.

The High Mass at the Cathedral was a clever take on the Novus Ordo - a little English interspersed with plenty of Latin. The Boys Choir was fantastic - Latin, Latin, Latin! The most amazing rendition of Ave Maria which just sent you into orbit - WOW!

As soon as the Mass was finished the organist let rip! Boy, that is one powerful set of pipes! I bet any spiders and settled dust were blasted out of existence by the music - my eardrums certainly were. Loved every moment!

Israel is the only nation on earth that can flout international law with impunity,the UN is powerless when it comes to Israels occupation & settlement of the West Bank & persecution of the inhabitants. Not to say CRIMES AGAINST HUMANITY & WAR CRIMES in GAZA & LEBANON