Do not clericalize the laity 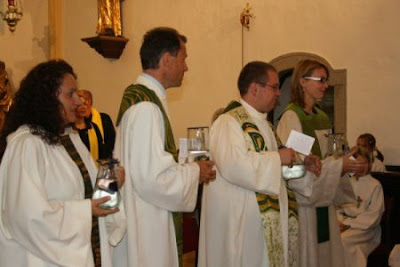 clericalisation of the laity in the Diocese of Linz

In his speech to the Brazilian bishops at the end of their as limina visit the Holy Father said “Do not secularize the clergy and clericalize the laity”. There is always a danger of priests becoming social workers, accountants, museum keepers, political agitators, it fact a whole host of things other than proclaimers of the Word, through the sacraments and preaching.

The problem is even more grave when the laity become clericalised, when lay ministry is seem primarily as doing something on the sanctuary. I winced recently when con-celebrating a funeral and the PP announced, unnecessarily, the arrangements for Holy Communion, drawing a distinction between priests and "ministers" meaning Extraordinary Ministers of Holy Communion. The ministers are after all extraordinary, in the sense of being auxiliary, helping the priest out when there are such great numbers that he is unable to cope.

I am sure these are real "ministries" the problem with highlighting them by the term, is that there is a tendency not to highlight the much lay ministries of Christian witness of simply living out the faith. The couple living out their marriage are fulfilling a real lay ministry through their loving and bringing up their children, the same with the old lady bearing her loneliness and illness, or the young man or women living chastely in a sexually charge world. By emphasis on doing things on the sanctuary or in Church we forget the the singular importance of the central teaching of the Second Vatican Council, which was that the Church's function was to sanctify the world.

Feeding the hungry, clothing the naked, visiting the sick and imprisoned, being Christ in the world is the real function of the laity. Putting lay people on the sanctuary in as large a number as possible is an aberration. We need to find ways of spotlighting proper lay ministry.

"...that damned poltergeist..." even zeitgeist Fr Ray! :-) although I think 'poltergeist' is more apt because it's a spirit that has caused so much mischief and damage within the Church since V2!

I'm glad we don't do 'Linz' in our Parish!!! Nothing triviliazes the Sacred nature of the Priesthood than these 'wannabe clerics' stupid men and yes even women, who patently have no idea of what 'in persona Christi' means, only think of themselves as the centre of the universe and wouldn't know Church Teaching from their elbow (being polite here)!

I mean just look at that photograph attached to your post - it's a joke - 'Put your X on who you think is the REAL priest'!

These clowns should just go away on a long retreat and take a big dose of some good spiritual direction. If they come back with no change then perhaps they should just go join some protestant sect and rise to stardom - clerics, priestesses, bishops and the glitzy beyond. Oh you bet the devil is having a field day here.

And it's unfortunate that in some parishes the EMs are punished for stopping people making off with the Host, while the pastor himself instructs them not to, and there is no correction of the priest from the diocese. [Day 5 and counting.]

BTW, serving as an usher, EM, Lector or server does not preclude them from multitasking and doing all the other things you mentioned.
Chances are good to excellent that the people involved in the tasks you mention were selected precisely because they were active in those other areas in the parish.

But Linz is so far off the scale as to question whether the priests believe in the Real Presence at all. They have an even more basic problem.

As a people,we must become attracted to the possibility of being unseen,yet not unknown.Our Lady lived her life in this manner and it certainly hasn't caused her to become obscure over the generations!God is always aware of our service,and the heart's intention behind it.The world makes fame and status seem the ultimate goal,but who really wants to be admired by the dust that mortal man is.Better to be known and recognised by God on Judgement Day,even if it does mean surrendering our audition on the X Factor("it's all I've ever dreamed of Simon.....").

I wince too. I notice a very widespread liturgical abuse involving altering the words of EP2: "...and all the clergy" is turned into variants of "...and all who minister in your Church." This is not a case of improving upon the ICEL translation -- whatever "et universo clero" means, it doesn't mean "and all the clergy and lay ministers too."

Clearly there are different motives behind this clericalization trend. The Linz photo is symptomatic of in-your-face women's ordinationism. "If Rome won't allow woman-priests now, we'll try the altar girl trick and force their hand."

I think there's another problem though, which has less to do with heresy, rebelliousness or over-interpreting the concept of the priesthood of all the baptized. I've recently been doing the SVP collection at the end of Mass and for the first time I've been struck by the sheer number of people scurrying away from church who avoid your gaze and go out of their way not to be involved in parish life at all.

I can now understand how incredibly frustrating this must be for priests. And I can see how tempting it must be for the average parish priest to try and jump-start lay involvement by blurring the clerical boundaries.

But it's self-defeating. The ultimate effect of clericalizing the laity will be to reduce parishes to a rump of the 40 or so groupies who have sanctuary access rights: readers, servers, EMHCs and cantors. What do the texts of Vatican II, interpreted in the light of tradition, say about the authentic role of the laity in the life of the Church?

There is plenty for the laity to do within the context of the liturgy. Like learning to sing Gregorian chant, and one hopes, settings by Palestrina and Victoria.

After that the laity could usefully study Caritas in Veritatis and then go out and do the necessary studying that follows from the instructions contained therein.

If the truth about economics was exposed, understood and acted upon, the end result might be that there were far fewer hungry to be fed in prisoners to be visited.

There is plenty for the laity to do without being on the sanctuary.

The "Spirit of Vatican II - as opposed to Vatican II itself - was foreseen by Belloc. He called it "The Modern Attack" and rated it as the greatest danger to the Church yet. He said it had to be judged by its fruits which were not then fully apparent (1938), but I think Father, you have identified many, but by no means all,of those fruits, in your last paragraph

Well said, Holy Father! I believe the clericalization of the laity is one reason why the TLM is opposed in certain parishes. Those would be the ‘vibrant’ parishes with a plethora of ‘lay ministers’ thronging the Sanctuary at the drop of a hat. Those women – and it’s mostly women – aided and abetted by ‘feminist’ (read: cowed…) clergy are not going to give up their ‘ministries’ very easily.

In my altar-boy days in Ireland, many decades ago, there were six priests in our parish. Sunday Masses were packed and two or three of the Curates helped with the distribution of Holy Communion at every Mass. Today there are five priests in the parish. Mass attendance is a fraction of what it used to be and no Curate helps out at Communion time. Instead an ‘army’ of EMHCs perform this clerical function. And not just at Mass - but taking Holy Communion to the sick and home-bound as well. What is wrong with this picture?

The problems run very deep in regard to laity and their tasks in the Church's mission. I have great admiration for those laity who pursue their proper role as the leaven in the world, and for those who take up more ecclesial tasks (bookkeeping, collection counting, Instruction of converts, children’s education etc). However, liturgical and committee-type tasks (reading and extra-ordinary ministry in the former case and Pastoral Councils and Finance Committees in the latter case) have taken precedence for too long. This occurred because there was an idea around that the laity were simply regaining ownership of their Church. We need to be clear about several issues here. First, the Church does not belong to any of us; it belongs to Christ. There is no human ownership of the Church or of the Faith. Second, the focus on bringing laity into ecclesial roles has sidelined the laity’s indispensible role as the leaven in the world. Third, as John Paul II stated in Christifidelis laici the performance of a task does not make ministers of the laity; ministers become so only by ordination. When I was in seminary in the late eighties we were even introduced to the term ‘Ministers of the interior’ for our Church cleaners.
The idea that they laity had no ‘ownership’ (ministry) prior to Vatican II, either in liturgy or outside of liturgy, is a nonsense. Two of the greatest lay movements in the Church prior to Vatican II were the SVP and Legion of Mary. These took the spiritual and corporal works of mercy very seriously into every corner of the parish. Even in the early eighties when these movements were still relatively strong I could be found on one weekday evening taking cash or food stuffs to someone in need with the SVP, and on another doing door to door work seeking out the lapsed and converts to the Faith with the Legion. Why there is such a blackening of the Church prior to Vatican II –in order to promote the poltergeist spirit which disordered the implementation of the Council- is beyond me.

Having come from Anglicanism I knew what was up when I saw RC women giving out Communion. This stuff seems to be from a minority living in or in close contact with Protestant countries. Not from the life and heart of the church like Pope Benedict's Catholic revival.

These days we are fortunate to even have a Parish Priest to ourselves so it is more important to have Special Ministers.The FIFTH COLUMN of Born-Again "Christians" will always have something to go on about.Enough of them can start their own Church and leave Catholics alone.

We never used to have all this moaning and groaning.