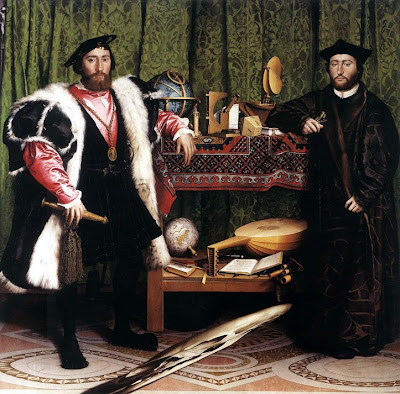 I have been thinking alot about Church floors recently. It was the dust last week, it had got from the Church, through the sacristy, into my house. This week it is the smell of the varnish, it is taking the same route. 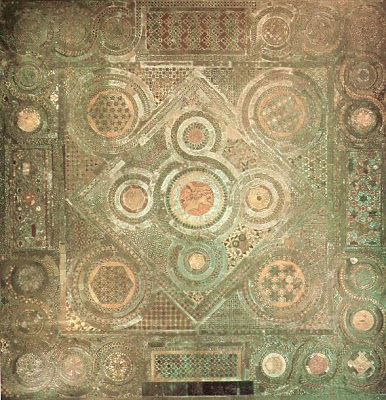 A reader sent me a picture of Holbeins, The Ambassadors, the picture is, it is actually about the break of Henry VIII with the Church, it is full of details that betray the drama leading up to Good Friday 1533.
What used to intrigued me as a child was the skull in the foreground, which I discovered myself as an eight year old skulking around the National Gallery. Then the scientific instruments took over, that lute with broken string, the protestant hymn book.
Now it is the floor, everyone knows it is a representaion of the pavement of the sanctuary of Westminster Abbey (above) but I discovered only a few days ago that it could be the Sistine Chapel (below) too. 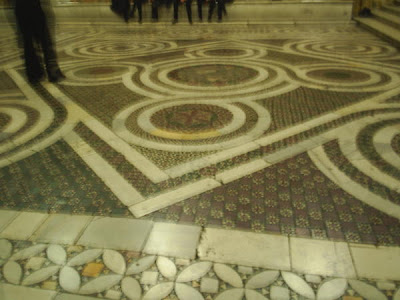 Now, wouldn't something like this be splendid in our Church? The problem is, of course, it most probably wouldn't be allowed.
The floor represents the Cosmos, the four humours and elements that govern the created order. It is a direct reference to ancient temples being a model of the Universe. Some scholars suggest when Jesus prophecied the end of the World he was speaking about the destrution of the Temple.
For most people today the iconography is a completly closed book, whereas up until the Reformation its meaning was obvious, at least to the educated. Strange how we have lost a "symbolic" literacy.
at September 02, 2009

Thanks for the history lesson. I took art history but alas and alack I know zilch about such flooring.

[You skulked around some pretty good places for an 8 year old! :-D]

Father,
I've looked at that painting many times, but only just noticed the crucifix that is nearly concealed by the green curtain in the top left hand corner. After your explanation (which I'd never heard before), the symbolism starts jumping out from the canvass. Thank you.

There is a apparently a clue in the painting which points to the date being Good Friday 1533.

The book to read on the Holbein is John North's "The Ambassador's Secret". It opens up a whole range of ideas about the painting and the culture - religious and scientific - which produced it. It stillleaves unanswered questions but is intellectually stimulating.