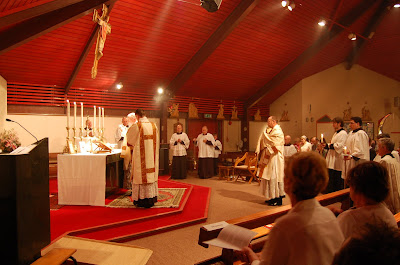 Fr Sean Finnegan celebrated his twentieth anniversary of ordination last night at Shoreham with Mass in Usus Antiquior. It was fascinating to see the traditional Mass in a contemporary setting. I preached a rather lack-lustre sermon. I was very impressed by the beauty of the music, especially the singing of the celebrant, who chose the most glorious and difficult of the Preface tones. I was pretty impressed too by the servers and by the deacon Rev Richard Edwards who made his "debut" in the EF as sub-deacon.
And yes, the church is that red, well, almost. It gives an odd sense of busy-ness, especially with the green marble altar, ambo and font all crammed onto the sanctuary.
Ad multos annos, Father.
at September 25, 2009

The church appears to be asymmetrical. There is one such in my home town of Paisley (St Charles Borromeo, built 1987). I really dislike it. Probably designed by some smart ass architect who thought he knew better than those who built York Minster, Chartres, León, St Peter's and all the other masterpieces of the Romanesque, Gothic and Baroque.

Hey, Crux, hold on! An architect is only as good a his (or her) brief. Buildings are the products of particular circumstances. Might be why the churches of the Ages of Faith are usually so fitting.

I bet the sermon wasn't that bad. Any chance of you posting it?

Crux Fid; actually it isn't asymmetrical; that is its only virtue! It was an illusion produced by the camera angle.

Fr Ray: thank you for your kind words. Your sermon was anything but lack-lustre, as I said last night. Bless you. And thank you for that, and your good wishes.

Can I ask what time Masses are in Shoreham. We would love to visit when we go to see our son who is at Brighton University.
Where exactly is the Church, a postal code will do.

Regarding the layout of the church, as I am sure Fr Finnegan knows, I was told by an elderly parishioner that it had once been the school. So the original design was that for a school.

The original St Peter's church is nearby but has sadly been turned into flats. I have some old postcards showing this original church and it was in a very traditional style.

It was an honour to be present at this very beautiful Mass. And I have to agree with Fr Finnegan - Fr Ray's sermon on Our Lady and her link with Catholic traditions seemed to me very much to the point.