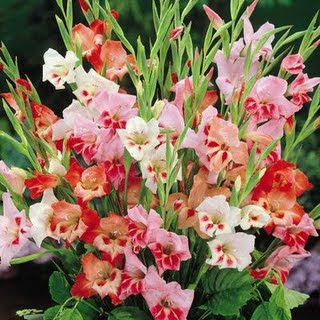 I am still in a rage, still fuming. This is my piece of therapy for today.
Last night I slipped on a particularly slimy piece of gladioli our Polish community had left on our newly varnished floor as I processed into Mass. I went flat on my back and now I have a bruised backside.
I prefer people to remember the Gospel and their encounter with Christ rather than the antics of the priest deliberate or otherwise, at Mass. If one of elderly parishioners had walked there, they could easily have broken a limb.
The latest diocesan health and safety seminar: Slip, Trips and Falls, will have whoever caused this accident attending it.
I had already removed some arrangements which had been placed in front of the altar. The whole point of altars nowadays being free-standing is so that they be walked around. You can't walk round it if flowers are placed immediately in front of it.
Not only were they there but they were so full of water, water was spilt all over a very beautiful and expensive Turkish carpet in front of the altar, I'd bought in memory of my mother. If it has been spoilt by being felted at least we can make an insurance claim.
Not only that, but more flowers had been placed on the mensae of the side altars, over the very sepulchers of the relics of the saints, they to were seeping water.
Altars are meant for sacrifice, not for floral decorations!
Three or four years ago, we had a pastoral letter in which our bishop wrote about the ecological disaster caused by the African cut flower industry. So much water is used, the water table is significantly lowered, local people starve because they haven't got the deep wells needed to irrigate their food crops. I expect my parishioners to use and buy flowers responsibly, in future I will add safely!
at September 07, 2009

The whole issue of how expat communities uses churches needs to be resolved. It creates a stack of problems including who is responsible for what. Or rather, who is irresponsible. In particular it undermines the parish priest as THE responsible individual for a church and what goes on in it.

Having expat communities is also divisive. As a general principle Catholics living in a parish should feel able to attend any of the regular services. There should not be special services for foreigners. The host community should accommodate them by having newsletters, reading, sermons etc printed in the expat languages. And the whole question of the use of the vernacular should be reviewed where there is a significant proportion of foreign residents (and foreign clergy too). The church is not an expats' social club, but where the parish is multi-lingual, Latin should be the norm for the liturgy itself.

I am making these comments as a foreigner myself. I do not expect as a matter of course to be spoken to in English. It is up to people who come to a country to speak the language of the country they are strangers in. They should make the effort. It's part of the deal of being accepted.

Sorry about your accident Father. I like to have a flower arrangement on the foot of the altar and still allow it as long as the sacristan or I will be the one to place it.

Yikes. I expect the carpet will be okay. Hopefully, the powers that be were able to take it outside yesterday to be dried. If it was JUST water, that is.

We do usually have a floral arrangement in front of the altar, but it's not sitting on carpet, and usually not too ostentatious, unless the "well meaning" parishoner gets the kind that has some sort of "lights" [so help me!] in the vase. ["Honey, the idea is to compliment, not draw focus..."]

At any rate, I'd be willing to be your parishoner feels terrible. In the meantime, I'll pray that your backside isn't permanently injured. St. Therese is patron saint of Flowers, supposedly and she and I are tight so I'll commend you to her. Ditto St. Dorothea, patroness of Florists. I'm not yet "tight" with her, but I liked what I read about her:

She was martyred under the reign of Diocletian and this entry says: "According to the legend, her profession of faith to the Romans was this: "I serve the Son of God, Christ, mine espoused! His dwelling is Paradise; by His side are joys eternal; and in His garden grow celestial fruits and roses that never fade!" While on her way to execution she was scoffingly asked by a young lawyer to send him some of the roses she had spoken of on joining her bridegroom. Whereupon she answered, "Thy request, O Theophilus, is granted!" Immediately after her martyrdom an angel appeared to him with a basket of celestial fruit and flowers, saying, "Dorothy sends thee these!" and then vanished."

Poor you Father.
One of my Lourdes pilgrimage books says: "Cultivate a 'Pilgrim mentality' which accepts the minor inconveniences that go with accommodating so many pilgrims."So easy to say. But your misfortune will help others to put into context their own misfortunes.
Get well soon!

this is a guest slot by Fr Meldrew on the many and profound iniquities of church flowers.?

hope you get well soon, i'm sure you will eventually see the funny side!

Hope you have recovered and feeling less sore after the attempted floricide.

Gem, I wonder if you and others on Fr Blake's blog would spare a prayer for my grandson Christopher aged 17 who is in hospital suffering from depression ? He is responding to treatment only very slowly. I hope that this request is not out of place.

Independent, of course. If it's not personal, what is the boy's first name? 17 is awfully young to be suffering from depression to such an extent to be hospitalized for it, so it must be pretty serious.

God bless him, and you. and your family.

Certainly I shall pray for your grandson. I am 47 and currently in the worst depression I have ever known, worsened significantly following the death of my mother six weeks ago and my evil, formerly adulterous father, now just a fornicator, having an affair with the village tart.

Depression is an illness that is not taken seriously enough in the UK at least.

Due to poor periphery vision,I sometimes bump into people,places and things.It annoys me,but I remember Christ fell three times on the way to Crucifixion.Each fall brought healing of some kind for us,His Father would not have allowed it otherwise.He will have felt every emotion it is possible to feel when stumbling embarrassedly.In my experience,you will find healing reflecting on His falls,from this event.

Sorry to read about your slip and fall. The lesson to be learned from your accident: use the fixed high altar and get rid of the free standing one then no flowers can be put infront of it and you will be facing the right way to say Mass.

Hard luck, Father - hope not too many bruises.

There used to be a rug shop in Greenwich market that did repairs and cleaning, if your rug is damaged. They closed because of the exorbitant rents imposed by Greenwich Hospital, and then started an internet business: www.kilimshop.co.uk I don't have personal experience of their cleaning/repair services, but they were always very helpful on the chatty level and had some nice rugs.

Thank you Gem and Old Believer , the young man is Christopher Peter, he belongs to the Anglican branch of my family, and his condition is undoubtedly serious. However he can appreciate that he is bing prayed for by his mother's Anglican parish , his uncle's Catholic parish, and my neice's synagogue. When I was in hospital they all prayed for me. I recovered; I trust that the Almighty will answer the prayers in Christopher's case.

Thank you, Ind. - I will certainly keep him in my prayers.