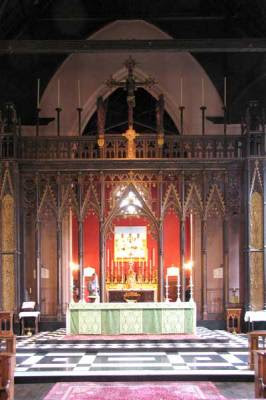 One of my erstwhile parishioners was the former Anglican clergyman and Vicar of Holy Trinity Reading, Brian Brindley. He became a Catholic layman after the Church of England ordained women, and in his words "proved itself not to have been Catholic". I once asked him if he found it painful not celebrating Mass, he replied. "Father, I have never said Mass in my life, I once thought I did for a period in my life but I was mistaken".
His house was extraordinarily cluttered, a mixture of things ordinary, domestic and banal, things antique and ecclesiastical and things which it was best to not to look at too closely. I used to be summoned to bring him The Lord when he was ill. He promised me the relics he owned, including one of St Andrew, for our Church but nothing came of it.
For the first time I visited his old Church's website after reading Liturgical Notes.

That church, of course, is the the former very Protestant proprietary chapel which owes its present adornment to Fr Brian Brindley. I am told by friends that the pulpit in 'Georgian' baroque was thrown out of the City Church of All Saints in Oxford when Old Mother Damnable flogged it to Lincoln College for a library. The screen, from Pugin's Cathedral in Birmingham, was thrown out when the papists vandalised it. The retro-altar is the famous Belgian baroque altar with the reversible tabernacle from a one-time daughter church of S Thomas's, S Paul's Walton Street in Oxford, thrown out when OMD sold it to the entertainment industry. Also once in S Paul's the monumental scagliola portico-style entrance into the church from the Sacristy. And in the North Chapel the baroque altar inscribed 'PAX' from the ballroom at Nashdom, which, when that House was our principal Benedictine Abbey, will often have been used by our great scholar, wit, and mystagogue Dom Gregory Dix.

The Church, where according to Fr Anthony Symondson, who preached at his funeral, "he celebrated the rites of Paul VI according to the rubrics of Pius IX", reflects his domestic collecting. 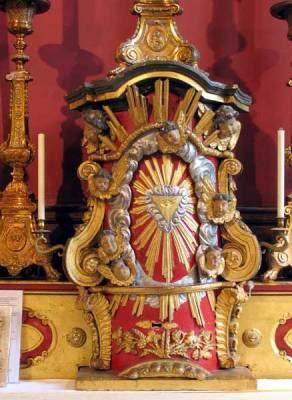 "Old Mother Damnable",used to refer to the Church of England, is mentioned to by Ambrose Phillipps de Lisle in his "Life and Letters". He attributes the term to the Tractarian W G Ward (1812-1882), and describes it as a play on the Loretto titles of Our Lady, "Mater Amabilis".

I wonder if this ward was the grandfather of Maisie Ward, founder of the publishers Sheed and Ward?

I met Brian Brindley a few times in his and my Anglican days and also went to his church in Reading for big occasions on a fast train from Paddington. He was amusing but I found it hard to warm to him because he continually craved attention and his vanity was an obstacle.

I, too, went to his funeral but I vaguely remember that Fr Symondson said something like 'He interpreted Vatican II in the spirit of Vatican I' and some other phrases on these lines that caused a laugh or two. Maybe I'm wrong.

Have you read his contribution to Damian Thompson's book, 'Loose Canon'? I think it's the only one worth reading, the rest are pretty feeble and sometimes embarrassing. I don't know Fr Symondson but I enjoy reading his work. Somebody who does know him mentioned recently that he regretted being involved with the book and thought it was a mistake. I don't understand why but I think it involved some reservations he had about Brindley's private life.

I am glad for the people of Holy Trinity, Reading, that the church remains open, even though I don't think I could bear to visit it these days as I am perfectly content with the Catholic Church. Fr Symondson itemizes all the furntiure and where it came from. He must have known Brindley quite well.

I really enjoy your blog, Fr Ray, but in recent years I cannot help thinking that you are becoming rather Brindleyesque in your liturgical preferences. He was doing in the Church of England over forty years ago what the Pope is doing today. But so were a number of Anglo-Catholics at the time.

Peter,
I don't have "preferences", I just try to do what the Church tells me.