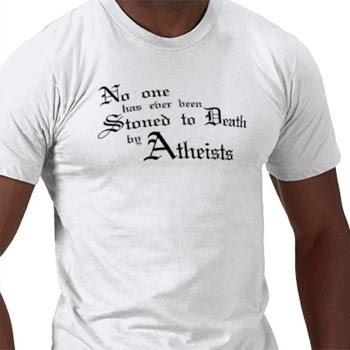 Fr Dwight has found an article/advertisement in the Telegraph illustrating aetheist T shirts. He rather wisely says:

I rather like the idea of polemical T shirts. How about this as an idea, the slogan "Done by Atheists"

I am sure you can add to the list.

Similarly "Done by Believers" T shirts could be illustrated by
The possibilities are endless, I like the idea of the Sistine ceiling or Galileo's telescope or a 19th century hospital ward.
The problem with atheists is they have no soul, if something can't be explained, it can't exist. Dear old Dawkins explains "love" in terms of "selfish genes". I have never understood how that explains beauty especially sublime music.
at September 13, 2009

Rosaries prayed in faith stop atheism and bring peace too.One doesn't have to be noisy or public to pray the latter. Cova da Iria, Fatima October 13th 1917,70,000 plus witnessed the Miracle of the Sun,many of whom were atheists. On Oct 13th 1951 a MILLION people gathered at the Basilica(where Francesca and Jacinta are buried) at Fatima to pay homage to Our Lady.The faith of these three children moved more than mountains,and our's can too,if we believe.
Sorry if I sound like a description of one of Fr Dwight's 'off putting wacky types',but one must testify as one has received Grace after all,and it is my relationship with Our Lady,given to me by Jesus, that has changed my outlook from grown-up rationalist(haha)to child like believer.I wouldn't swap this inner pearl for all the tea in China.I can do charismatic fundie too,given enough notice!

My father had to escape from a military lock-up and swim across the River Mura opposite Radkersburg, Austria, to get out of Yugoslavia because the Communists were going to shoot him.

Either he was paranoid, or some atheists really were out to get him.

Father, I just wanted to add the prayer given by the Angel of Peace to the three Fatima children before Our Lady's appearance to them.It is quite relevant to the point regarding belief and our responsibility towards atheists.

"My God, I believe, I adore, I hope, I love Thee. I ask pardon for those who do not believe, nor
adore, nor hope, nor love Thee."

Wasn't "Uncle Joe" an Atheist? He must hold the World Record record for bumping off believers.

Christianity is booming in the former USSR and they have the benefit of a superior education to the rest of us.

Whoever designed that T shirt ought to be checked out,there is obvious evidence of a loose screw.

Good point, father. A picture of a large pile of human skulls in Cambodia or a modern excavation in Russia with remains of hundreds of victims with a title: "We atheists do not use stoning, we have more efficient tools."

I think one important point is that atheists are struggling with a vague image of religion, an arbitrary admixture or all kinds of religion, under which they understand blind belif in something irrational unthinking stupid and "old-fashioned," all kinds of superstitions etc etc. Parenthetically, is this a consequence of an undue religious ecumenism bringing about the loss of the true identity and doctrinal specificity? But the Church actually is also struggling with all these superstitions!

One implication is that it is pointless to defend just the "religion" or "belief" in dispute with atheists because all religions are different (most totally irrational and wrong). We have to contrast the Catholic (or at least Christian) doctrine with atheism - I think (my personal experience tends to support this) many honest atheists may be surprised to find they rather converge with catholicism on many important points. Dumb, unthinking, bigoted and irrational atheists are equally stupid as the same religious.

JEF,What are you no about? gibberish & bad spelling spoils this blog,not to say some of the other incessant xenophobic nonsense.

I've said this elsewhere but I'll say it again: Dawkins contends that there is nothing but matter and that there is no spirit. In that case, the Holocaust, the Killing Fields of Cambodia, 9/11 etc were nothing more than an unfortunate series of chemical reactions.

Frequently we hear non-believers bleating about having "religion rammed down their throats". However, in my experience they are the ones doing the most throat ramming.

Stoning people to death is in the modern world a Muslim habit for which all religions are getting the blame.

The list of things atributed to Atheists do not belong to the Atheists camp.

Those things belong to the 'Nonserviam', that is, Satan. The list are things the enemies of Christ did. Atheist just stand around watching, saying "Never again" as the same things happen over and over.

Holocaust, ... the Killing Fields of Cambodia, 9/11 etc were nothing more than an unfortunate series of chemical reactions.

Crux, it is oversimplification. Dawkinsianism has many rational points, some are in fact even true (which is exactly as in all kinds of lies: mixing true and false to increase credibility), some are oovertly stupid.