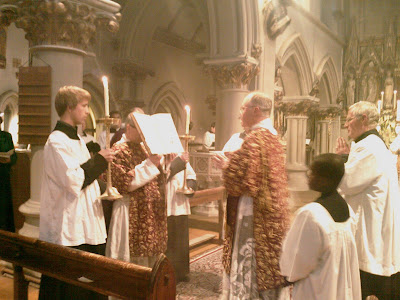 Fr Zuhlsdorf, that Colossus, asks for feedback about Summorum Pontificum, Monday's the Feast of the Exaltation of the Holy Cross is the second anniversary of its implementation. Some of the accounts from English diocese, if they are true, should cause the Holy See some concern. For the most part people seem to be saying there has been little change, there isn't a great flurrey of additional Traditional Masses being said.
I think most of Fr Z's correspondents miss the point of Summorum Pontificum. I am sure the Holy Father is not displeased with what has happened so far. Sum. Pont. is about encouraging the celebration of the Traditional Mass but it is much more than that, it is primarily about the Church living in peace with itself and with its history. It is about the hermeneutic of continuity.
It is about bishops and priests respecting the things that their parents understood to be holy and sacred.
When I was a seminarian less than a decade after the liturgical changes, we experimented with all sorts of "liturgies", the only thing which was forbidden was the "Tridentine" Mass. One heard, not too long ago, about seminarians in Rome being expelled, or being blocked from orders, for attending the Traditional Mass or being too close to the FSSP or ICKP. Sum Pont is about overcoming this.
In my diocese before its publication there were about three priests celebrating the Traditional Mass, two years on, the number has more than doubled, mainly with younger priests celebrating the Mass.
I don't think the intention was that every parish would immediately offer the Traditional Mass on Sundays, although a good thing, that would be a rupture with the immediate past, something the Pope would see as undesirable. I think the intention is more the "gravitational pull" of "Tradition". This for me was most evident in the installation of new Archbishop of Westminster, a real contrast with the installation of his predecessor.
In my youth liturgical "experiment" involved coffee tables, not wearing vestments, pottery vessels, bean bags, nowadays that is soooo yesterday. Today experiment is more likely to be about Gregorian chant, ad orientem, classically cut vestments, silence, receiving communion kneeling.
What the Pope has done is to give his blessing to a grassroots movement, which includes theology, morals and holiness too, as well as liturgy, that will come to fruition in a generation or two. Gradual growth and deep roots are his concern, he is not a quick fix Pope.
at September 12, 2009

"What the Pope has done is to give his blessing to a grassroots movement, which includes . . . morals."

Morals, I should hope so. We can start with usury. It's one of my favourite topics of study. After long deliberation marred only by the unavailability of Cardinal Hostiensis' enumeration of as many as thirteen extrinsic titles, I have come to the following conclusions.

Otherwise, in contracting for the enforceable repayment of the entire principal the moneylender by definition contracts out of risk and may not claim a title of periculum sortis, which ceases to exist in any event to the extent that the principal is in fact paid.

Poena conventalis (damages consequent on breach of contract) is not a title to interest, but to damages controllable by the court. English law allows poena conventalis to be contracted for, but only as an upper limit to damages an injured party can claim, and will not allow it to be used in punishment of the defaulter.

Damnum emergens is legitimate for an occasional lender in indemnification of the expenses actually incurred in arranging a loan, but not as a title to a pre-specified percentage of the principal.

For someone in business as a moneylender the only legitimate extrinsic title is praemium legale, a standard or bespoke service charge, calculated according to the value of the service itself (not a percentage of the principal), which must cover the costs and the occupational hazards which every businessman must face as such.

Thank you once again Father for your blogging. This is another of your posts where you come at an issue from a different angle from others whilst offering analysis which is balanced, thought provoking and faithful.

Regularisation of the EF possibly opens the way to a variety of liturgical forms such as vernacular masses with the canon recited in silence or celebrated ad orientem.

Where parishes are composed of several linguistic communities there is a need to do something to promote unity, with a stronger drive to making the EF the norm.

I think you are right Father when you say that it is all about continuity, of liturgy, but also of doctrine since the two are so closely interlinked. The E.F. is now re-established and will find its place slowly but steadily. I have noticed a distinct move back in other areas to tradition and therefore to traditional doctrinal thinking. The main Sunday Mass in my cathedral is now a sung latin N.O. with the option of receiving Communion kneeling at the altar rails, and traditional latin vespers have been re-established. Silence is being re-introduced, often to the discomfort of the congregation, by priests, and in a recent parish meeting the priest has underlined the example of Communion reception at Papal Masses.

All this is not by accident and would have been unthinkable before Summorum Pontificum.

But time is needed!