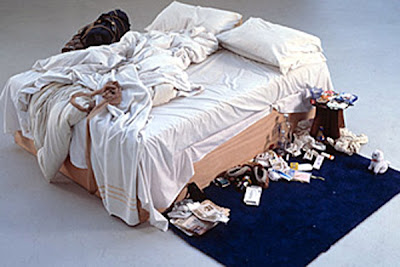 People who look through telescopes at infinity tend to believe, people who look through microscopes at miccobial life tend to be atheists.
Its a simplification but miopia tends to lead to disbelief both in science and in the arts. The trend to look inwards, to constantly examine and display one's own life tends to destroy wonder, and consequently faith. The arts in the last century have become neurotically self obsessed. There is liitle concern with beauty, or wonder in our art galleries, or even churches. There is a new iconaclasm abroad, which Christians have experience in the destruction or ignoring of beauty. Ancient churches full of objects designed for the celebration of the liturgy, now have a litugy that literally turns its back on these objects. The most precious and priceless are more likely to be seen in a museum than be used in the context for which they were made. Music especially has been silenced and replaced by the taudrey.

We live in age in which the Church more than any other instituition is guilty of not just wholesale destruction of things of beauty but contributing on a massive scale especially in the West of debasing its Christian cultural roots.

On the eve of the Pope's meeting with artists in Rome Chiesa presents this:


It has become routine to think about Benedict XVI as the pope of the "Logos." His critics accuse him of rationalism. But in reality, he is convinced that Christianity's "proof of truth" does not come solely by rational means. For him, "art and the saints are the greatest apologia of our faith."
This, in fact, is what he said in this regard on that August 6, the feast of the Transfiguration of Jesus, to the priests of Bressanone:
"The arguments presented by reason are absolutely important and indispensable, but there always remains some disagreement somewhere. If, instead, we look at the saints, this great luminous arc that God has set across history, we see that here there is truly a power of goodness that lasts over the millennia, here there is truly light from light.


It will be interesting to hear how the Pope tries to inspire his audience. Personally, I see this meeting as being one the more important of this Pontificate.
at November 20, 2009

IT's not only the artists, it's also their enablers who commission crap.

I rest my case.

[Excellent observations, BTW, the only point I'd disagree about would be re: the ones who look through the microscope -- they more than anyone can see how UNRandom things are! Look at all the pictures fo embryos!]

I believe it was Dostovesky (or however you spell it)who said in his Nobel Prize acceptance speech that the world will be saved by beauty. In a way he was right. I'm sure I have said this before but an expample is the fuss that was made (rightly IMHO) over the pointless Allied bombing of Dresden when the war was almost over.

Talking of beauty, whilst playing at your church yesterday I had mental images of that awful grey paint (to which you have previously referred on this blog) replaced with a lovely white, and all the other colours - the reds, the golds &c., restored - even on the ceiling. Now that would really be beautiful art and I'm sure you will achieve it.

"Well, that's enough about me,let's talk about you, What do you think of me"?

I should correct my earlier post. The quote is from Dostovesky (although I've never been able to locate it exactly and his books tend to be fairly long) but it was quoted by Solzhenitsyn in HIS Nobel Prize acceptance speech.

"Mea maxima culpa" or "Sorry mate" according to how you like your liturgy!!!

I think that Gem's first statement nails it.
The entire artistic tradition of the west originated in the patronage of the Church during the middle ages and renaissance which in turn led to the development of the distinct professions of artist and architect, the beginnings of academies and the development of artistic ideologies. In short Art took on a life of its own with its concerns being shaped by both academic institutions and the market. In Britain, for instance, the kinds of work being produced by contemporary artists can be easily explained by the kind of teaching promoted in art colleges since the Coldstream report in the 1960s, on the one hand, and by the activities of wealthy collectors, ("enablers" in Gem's terminology) on the other.

I was intrigued, Malcolm about the quote 'beauty will save the world' especially as Dostoyevsky died before Nobel prizes. But google tells us that it was Solzhenitsin who quoted Dostoyevsky at his Nobel prize speech in 1971. So the connection is made.

I am amazed at the prescience of Dosteyevsky. In 'The Demons' he tells the story of a group of liberals in an unidentified town who welcome the young nihilists and theoreticians because they want to be thought 'progressive' and are rewaded for their liberal attitudes by mayhem and murder.

Modern art is rubbish, and also modern 'classical or serious' music. Does anyone ever want to listen to modern music, the Stockhausens etc?

To my horror, I find I share some views with the Nazis and Communists who railed against 'decadent art'

JohnF - a clock that has stopped is right twice a day, and there is always a good point, albeit tortured and perverted, in heresy and atheistic ideology. The Nazis and Communists created the most frightening, false propagandist "art", based on lies and a denial of our humanity. Humans naturally revolt against the anti-human sentiments and plain ugliness often found in modernism. The Communists and Nazis replaced these populist trash - something like a pastiche of popular religious imagery designed to deaden the soul and quell dissent. The devil may sometimes appear as an angel as light - but be wary of dancing with him.

We may rail like the Nazis and Communists against decadent art, but they replaced it with inhuman art.

I wouldn't wish to give either type of art any wall space.

Malcolm - Blog readers might be misled into a fruitless search through Dostoevsky's "The Devils". In fact the quotation about beauty and the world is from "The Idiot".