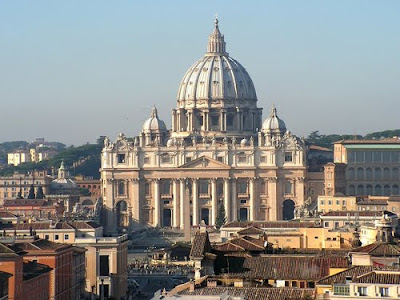 I was planning to go to Rome in January but I found out today the bishops of England and Wales are going to be in Rome for what should be their five yearly ad Limina visit to report on the state of the Church in England and Wales.
I was there some years ago just before an ad Limina, in those little restuarants on the Borgo Pio Monsignori from various dicasteries seemed to make a bee-line for any priests with an English accent, just to satisfy their curiosity about the English situation, that was actually quite fun but the truth is I just don't want to be bumping into my Fathers in God, all the time, they'll think I chose to be there deliberately.
During the last ad Limina, which I think actually happened some eight years ago, a priest friend met a very disgruntled Prelate who had just had a rather strained interview over a dossier someone had sent with cuttings from his diocesan newspaper to the Congregation for Bishops.
I suppose with the Papal visit to our country next year even more attention will be given to the English situation.
at November 06, 2009

Geez, just go to Club Med or something and be done with it. Come to the West Coast. I'll show you not decrepit churches but dinosaur pastors. Enough to keep the Brea Tar Pits replenished.

I am disappointed for you not to be in Rome for the Conference organised by the Australian and American Confraternities of Catholic Clergy.
JARay

You could always try Dunoon - no, hang on, leave that for when you need to escape summer heat. More seriously, Milan can be very nice in January - the Duomo, the Ambrosian Rite, etc...