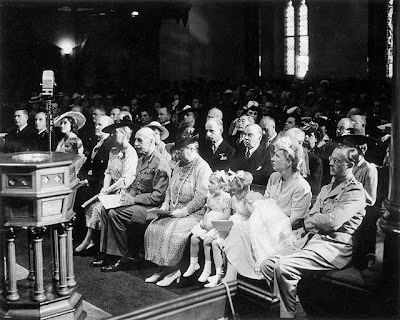 Fr Edward McNamara has been asked about the validity of a baptism conferred by a deacon, who for the sake of "everyone being involved", normally got someone else to pour the water, rightly Father says it is likely to be invalid.


It makes no sense whatsoever to say, "I baptize you" if in fact someone else is doing the baptism. ("Baptism" means to bathe or dip.)

It is not a practice I have heard of in the UK but it is as Father says:


Sadly, this is not the first time that the above erroneous practice has occurred. In another country the Holy See ordered that several years of baptisms be repeated, or, rather, carried out for the first time.


It is what happens when we invent liturgy. Salvation is doubtful.

Just to throw a small cat amongst a flock of pigeons, isn't what is described what happens at a British "royal" baptisms in the C of E. By perrogative one bishop holds the child, another pours the water, a third pronounces the formula.

Is it a practice that exists elsewhere in the Anglican Communion where there are several clergy in attendance?

I am sure that your description of the baptism of a Royal baby is totally inaccurate. From what you have written it seems as if water is never poured! There has been a tendency for such baptisms to take place in the Music Room at Buckingham Palace. This hardly seems ideal, but I am sure the baptisms are completely valid. If my memory serves me correctly, the Archbishop of Canterbury is usually the Minister of the Sacrament on such occasions. I am confident that neither he nor The Queen would consent to anything of doubtful validity. Perhaps another bishop has some role, rather like what happens when the Holy Father baptises babies in the Sistine Chapel on the Feast of the Baptism of Our Lord.

So it is invalid?

Of the three, which one pours the water?

Quick question Fr
If a priest asked to hear the confession of an adult convert(who was not baptised as a child and therfore the confession would be invalid) before he baptized him, could that constitute doubt as to the intent of the priest and thus doubt over the validity of baptism?

Dear Fr. Blake, You write that "salvation is doubtful"; thankfully, the gift of salvation is in the hands of God rather than our own.

Alban, the sacraments are ordinary means of grace and therefore of salvation.

Jack, I would hope not, it is my practice.
I suggest catechumens might confess their sins before baptism, stressing they are not obliged to, and that baptism for them is absolution. I do so for several reasons:
1, it appears to have been the practice of early Church. Those baptised by John did so "confessing their sins".
2, there is often a need to make reparation for sin
3, catechumens often need to unburden themselves of their past lives
4, it helps them prepare for subsequent confession
5, it is important part of spiritual direction
6, there is a need for people to articulate areas in which catechumens need healing
7, Invariably they want to do so

There is a right of Sovereigns to have their children baptized in their houses rather than in their parish church under the old pre-1917 Canon Law, which still applies to some extent in the Church of England where it is not in conflict with the various legislation both canonical and statutory passed since the Reformation. S. Alphonsus deals with the point in his Theologia Moralis in some detail, noting that in Italy at least the right had extended to Barons. The only English Baron I knew always had his children and grandchildren baptized in his private chapel.

Surely though, if someone who was in fact "baptised" in such a ceremony happily went through their lives believing they were baptised (and being glad about that fact) the concept of baptism of desire should suffice to mend the problem?

Sean,
The difference between actual sacraments and desired sacraments, is that the real thing confers grace, the desired thing we hope does.

This is actually quite important now when Anglicans, many of whom presumably receive Penance, Eucharist and Ordination by desire.
There are of course those who have received marriage by desire, those in a second marriage. Possibly here you can begin to see a problem bt over stating "desire" in sacraments.

You couldn't make it up

a) I don't think it matters a flip who holds the child (Adults aren't held, and usually the mother or Godmother holds the child and have been doing so since shortly after Jesus was a carpenter.

When I was in 1st grade "sister DAID" To baptize someone you pour water on them and say "I baptize you in the name of the Father, and of the Son, and of the Holy Ghost, amen. [we had the "Holy Ghost" back then, before they went all post Vatican II with their hippified "Holy Spirit"] and

Just to throw uou another curve, if a priest's hands were cut off, would it be valid if he said the words, and someone else poured?

Gem, why is "Holy Spirit" hippified, as you put it? Surely it is closer to the Latin "spiritus" than "ghost"?

Anyway, hippies didn't come along until 1967. The Second Vatican Council was a few years earlier than that. ;¬)

Seriously though post Vatican II, though not right away, they changed it from "Ghost" to "Spirit."

Gem: It's often difficult to tell in print if someone's joking or not. Hence I leave an emoticon ;¬)

BTW I'm old enough to remember when it was "Holy Ghost".

Father Ray, like Peter Simpson I am highly unconvinced about this alleged royal practice. I have heard this allegation before, but have never seen any evidence to support it (not, I concede, that I have investigated it with particular energy; life's too short, etc.). It would certainly be contrary to the CofE's own rites, and sounds all too much like one of those things (like the Nag's Head fable) which someone has at some stage dreamt up in an attempt to discredit their opponents.