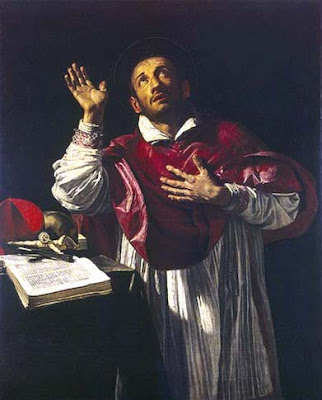 The polemical style of modern atheists and secularists reminds me of the ranting of those Reformation preachers. Generally the arguements are ad hominem, if they address issues then they are simplified strawmen constructs of their own devising which they ridicule and easily destroy. I read someone on the Eucharist using words like "magic" and "cannibalism".

Today is the feast of St Charles Borromeo, he, above all epitomised the Church's response to those ranters, "out of the sordid Reformation, sprang the bright light of the Glorious Counter-Reformation!" As one or two commentators have pointed out today's atheists are essentially Protestant, perhaps then we should learn from Borromeo. This is an over simplification, but in many ways the late Renaissance was an age of the rejection of God, the Baroque period, one of His rediscovery.

I think it is very significant that no English bishop or priest or anyone from the Catholic Media Office were willing to respond to Fry and Hitchens in the recent debate on "the Catholic Church is a source for good in the world", the left some poor Nigerian archbishop and Ann Widdecombe to be routed in the debate. Defending the faith is not a skill most bishops and priest have, nor do our payed employees.
Boromeo established seminaries precisely to train preachers to defend the faith, it strikes me that this, defending the faith, and the formation of saintly priests is precisely what our seminaries should be doing. Borromeo seems to have almost forced his priests into holiness.
Though managing crises was one of his skills he never seperated "managing" from prayer and penance. When plague ravaged Milan apart from organising succour for the sick, he also walked barefoot through the streets carrying a huge cross, pleading for mercy. I often wonder if that might be a solution to our vocations crisis.
One of the marks of the Counter Reformation and Borromeo's work was the employment of architects, artists and musicians to make tangible the glory of the Catholic faith. Today's atheists are evenmore iconoclastic than their Protestant fore-fathers. Many artist are indeed atheists but how great is the need to encourage those who can make our faith stone or paint or music. It is not just about the final product, a building, an altarpiece or a piece of music but getting artists to think about God and the Incarnation.
I just wonder if under Pope Benedict we are on the cusp of a new Counter-Reformation. Hitchen's, Dawkins Fry and co at least indictate a new interest in religion for which our tired Liberalism of the 20th century has no answer, we need a new vigour to combat it.

By the way, is Stephen Fry, who believes the Catholic Church is a evil in the world still fronting the The Passages' appeal , "A Night Under the Stars", this year, despite The Passage being a Westminister Diocesan based project for the homeless? If he is, is it still under the Cardinal's patronage?

We need bishops on fire with the Holy Spirit.

St Charles Borromeo was raised to the archbishopric of Milan at aged 23. He died aged 46. He was energetic and "filled with fire".

He met with much opposition from inside the church. He even had to attack his own confessor. He does not appear to have been terribly popular in some quarters of the Church. He still persevered in the face of great adversity.

I do not think that for him silence was an option. Neither was doing nothing. Opponents could not ignore him. He was single minded and determined in his mission.

What would he have said about the recent European Court of Human Rights` decision which said that Italy was in breach of its international obligations in requiring or permitting crucifixes to be displayed in classrooms ? Considering that the decision (to be appealed) has far reaching consequences for all states signed up to the European Convention of Human Rights (more than in the EU) I think he would have been in the forefront of the attack, nay a verbal onslaught, on the decision and doing everything in his power to have the decsiion reversed.

Do you happen to know whether the Catholic Media Office was invited to produce Catholic Apologists for the debate against F & H? If they were invited and refused to be involved, it is a disgrace. If they were not invited, it is also a disgrace but of a very different kind.

Is there a way of finding out how the whole thing was organised? I had the impression that it was a set up. I really hope that it was.

It depends which Reformation preachers, or indeed Catholic preachers. The Reformation period was not one of great restraint in language, and abounded in ad hominem attacks on all sides. Such indeed are to be found in the works of St Thamas More, and controversialists of all kinds.

It is rather unfair to lump those who followed Luther and Calvin,and indeed Zwingli, with those who do not believe in God. It is noticeable that the Holy Father invites Lutheran biblical scholars to address his seminars, and that his published works have frequent footnotes referring to works by Lutherans and other Protestants.

Some of the best work in commending Christianity to unbelievers in the last century was done by CS Lewis.

Thouh shall not question Stephen Fry!

People talk - correctly I think - of the gravitational pull of the extended use of the Extraordinary Form. They suggest, beyond its own beauty, it will have a corrective urge on the abuses sometimes present in celebrating the Ordinary Form.

For a while, I've been impressed by a simple thought that another made: Cultus/Worship, as the word suggests, is at the heart of Culture. A beautiful Cultus, as the splendid tree trunk, leads to beautiful and splendid branches and foliage - be they manners, morals, the arts etc.

With a return to a worship that grafts us properly back to the evolving, living Divine Liturgy of the past 2000 years, this Worthier Cause will produce Worthier Effects. Bad cultus/worship produces a bad culture; an exceptional Cultus would produce a culture worthy of our dignity. I think Dietrich Von Hildebrand used to call post-50s Western "culture" as really an "anti-culture." Again, judging by the word, the Ancients apparently knew the connection between Worship and Culture; I think more of us in the Church are learning this old lesson, with an opening up to a more beautiful worship of God, through the ancient Liturgy and an improving celebration of the Ordinary Form.

Lastly (and not separate from a desire for a more beautiful Cultus and Culture), how wonderful and soothing it would be to have just One, Holy, Catholic and Apostolic Bishop amongst us. Oh a shepherd filled with Goodness, Truth and Beauty! Such a man of True Love would have his own gravitational effect for the Church and, through her, society.

They need to shutdown the seminaries here and get them overseas and foster a sense of mission in our young men.

Anne Widdicombe is bright but is clearly poorly versed in the Catholic faith.

Most bishops haven't a clue how to defend the faith and one squirms anytime they are invited to appear on tv.

I read a paper delivered by CMOC to the Malcolm Muggeridge society and it was just one lame joke after another - and that to a gathering of non-catholics who must have been underwhelmed by it all.

Is Vincent any better?

I am neither 'traditional' or 'catholic' simply Catholic. We are setting up a small pressure group as a response to Eric Hester's meeting with Bishop McMahon who says he sees no problems from Catholics. We aim to support our Bishops by helping them see the problems ordinary Catholics face daily..a type of Catholic Action by the lay people. Our Patron will be St Charles Borromeo & it is called the St Gianna Molla Institute for the Preservation of the Faith..all Catholics in conformity with the teaching magisterium of the Church are welcome as are non-Catholics who uphold these principles. More info on my blog..This is how we see the way forward.

In response to becket I meant to say we are neither 'traditional' nor 'liberal' simply Catholic.
St Charles Borromeo died age 46 his life's work done. Me I'm just turned 47..hope I do a lot for God in however many years to come!

"In response to becket I meant to say we are neither 'traditional' nor 'liberal' simply Catholic."

Amen, sister! I wish I heard more of this from the Catholic blogs I follow. I know Fr. Ray has posted beautifully on this before.

The counter reformation really has been ongoing:

When are the counter reformation leaders ging to get the credit they deserve?