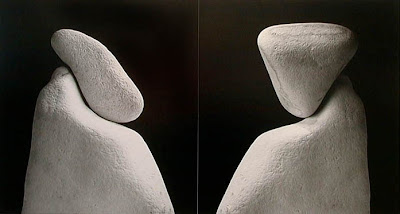 A small group of my parishioners went off to encounter the local Secular Society, to join in a debate over Darwinism. What struck my people was how fundamentalist were Brighton's secularists, they characterised all believers as fundamentalist Creationists but most had no way of reasoning beyond the "big bang", they couldn't deal with a first cause, or an efficient cause. Even on Darwin himself most were a bit shakey, few had read his Descent of Man, some were a little uncomfortable with Marx's criticism of him. I am told that on the whole our peoples contribution to the debate was actually welcomed, so much so they were invited to the next meeting.

I was told that during Fresher's Week at Sussex University 220 first years signed up to the University Secular Society, I haven't heard how many signed up for the various religious societies. I am struck by how young people want to discuss religion, wherever I go religion seems to be a subject for discussion. What most religious people are badly prepared to discuss are those things the non-religious want to discuss, those fundamental questions that science just can't answer or where science merges into religion.

There are pretty basic things we need to define, such as what we mean by the term "God", the origin of matter and the laws of nature. What goodness is, what is a good life, the nature of morality, for us Catholics unless we are willing to dialogue with people at these crucial points, we might as well be talking about angels dancing on pinheads. It is these fundamental questions that bothered classical and  medieval mind that still perplexes people in the workplace, in the pub or on the train.
at November 10, 2009

The "New Atheists" are not using facts to discredit religion -- they are using disinformation (exaggeration, tendentious interpretation of history, and caricature of various tenets of belief). The most blatant caricature is precisely that "Christians ALL believe in the literal truth of the Six Day Creation in Genesis -- which science has disproved, ergo religion is rubbish."

I fully accept the Big Bang, the estimated age of the universe at 13.7 billion years, and the emergence of Man at the culmination of a period of gradual evolution of progressively more adept ape-like creatures. I see no contradiction between the concept of theistic evolution and the teachings of the Church. If Jesus, as God incarnate, underwent a 9-month gestation period in the womb of Our Lady, in which his physical body -- the instrument of Redemption -- emerged from a microscopic life-form into a baby, is that not God the Creator validating his own chosen process?

Would it be desirable for the Pope to define dogmatically (or at least state categorically in an Encyclical) that a process of God-induced evolution is compatible with the Catholic faith, precisely to undermine the atheistic "Darwin-vs-the Bible" disinformation campaign? At the moment, all we have is snippets. We need to beef up magisterial teaching in this regard and develop doctrine in a legitimate way in order to counter the nonsense of humanism effectively.

I have only recently become aware of what you are saying. We do need to be more informed on these scientific issues which are capturing the minds of our young people. I have done a little in depth study over the past few weeks and I am amazed at just how feeble `evolution by natural selection really is. Agaijn we assume Evolution was started by Darwin. We go into the subject almost apologetically and murmur "But God could have been responsible". For one theory of evolution, yes, but not for Darwinism. Evolution by Intelligent Design will be radically different from Evolution by`natural selection`. I am so glad you8r parishioners are getting involved, like many catholics I create the illusion that I am the only one interested.

I think your points can be somewhat demonstrated on a recent debate that occurred last weekend on BBC called Intelligence Squared. The Catholic side was not well prepared in arguing against Hitchens and Fry's ad hominem arguments. We failed to capitalize on the wealth of realism we inherited from the schoolmen.

Here are the links to the debate for your interest:

Did Darwin himself expect his "theory" to be swallowed hook line & sinker? surely it was meant to be subject of debate,we are supposed to be allowed to draw our own conclusions.

All of these World-Shattering theories are supposed to be analysed by intelligentsia and that does not include a bunch of MORONS whose only claim to fame is to belittle people of FAITH who for generation have only been doing GOOD in their communities.

Why don't they look for a theory of their own,get off their FAT BACKSIDES and do something for somebody for NOTHING.

ps - John - that is a link to consideration of Thomism and Intelligent Design. It is easy enough to find scientists (with no anti-religious Dawkinsian bees in their respective bonnets) writing about the dubiousness of ID.

I have a student, catholic, not apparently stupid, 18 or 19 years old, who wears (yes wears, round his neck, like a necklace) a rosary, but who doesn't practice and was "impressed" (his words) by some Jehovah's witnesses he met recently.

Please pray for him and for me.

Would it be desirable for the Pope to define dogmatically (or at least state categorically in an Encyclical) that a process of God-induced evolution is compatible with the Catholic faith, precisely to undermine the atheistic "Darwin-vs-the Bible" disinformation campaign?


Francis, The Pope John Paul II has published a paper on evolution and doctrine in one of the major biological journals:

The biggest problem with the so called "New Atheists" are, as you noted, totally irrational, stupid, superficial and rank ignorant. Also arrogant. How are you going to dispute with a dude stating that the idea of gods is stupid because he used to fly on an airplane in heaven and did not see any? Are you going to enter into a discussion about the nature of metaphysics? Most likely this guy won't understand 5% but is likely content with himself thinking you are fool overcomplicating this simple matter. I also wonder is there any science education in modern religious seminaries?

Here is a link to the text of John Paul II, "Message to the Pontifical Academy of Sciences" (in case someone is lazy to google):

, for us Catholics unless we are willing to dialogue with people at these crucial points, we might as well be talking about angels dancing on pinheads.

For us Catholics whose parents were fed fairy floss instead of the meat of the Faith in their 'Catholic' schools and we who went to the same schools and who hear "God lurves you, come as you are, all religions are the same" from the priest every Sunday at Mass what hope do we have to intelligently take on anyone about the truths of the Catholic Faith?

I got a lot of good info on evolution from this for a friend.

What's most necessary is for Christians to extricate themselves from the "two storey universe" mentality, that permits ignorant atheists to set the terms of the debate. God is not directing the action down here, from up there. Why on earth, then, should "natural selection" be perceived as any kind of a threat? Who is the author of nature? Is nature not "rational"? Why on earth is it necessary to construct some kind of convoluted alternative? Darwin's theories can stand or fall or be open to refinement on their merits, absolutely without reference to "whether or not there's a God". They have nothing whatever to do with the question.

Lizard has kindly found a reference to the speech made by Pope John Paul to the Pontifical Academy of Sciences where he discusses evolution.

The reason I think an Encyclical is needed is to move this up a gear and to take us forward from "Humani Generis." Not just in terms of formally clarifying contemporary Catholic teaching for the purposes of moving the debate with atheists onto a different level, but also to align Catholics.

Frankly, I'm as much taken aback by the number of (dare I say) well-meaning but wrong-headed Catholic Six-Day-Creationists as I am by the growing number of militant humanists.