Masons in the Church 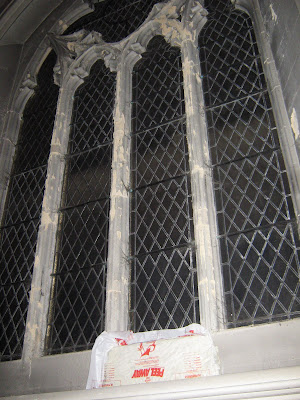 Someone gave us just enough money to get our west window fixed, there is scaffolding on the outside window. The horrible grey paint was sprayed everywhere in the 1970's to cover gloomy coloured stone. The paint is impermeable so moisture soaks into the stone and dissolves the it under the paint. The stone masons have applied something called "Peel Away" to a test area, it is covered with polythene and hopefully after a day or two most of the paint is gone. 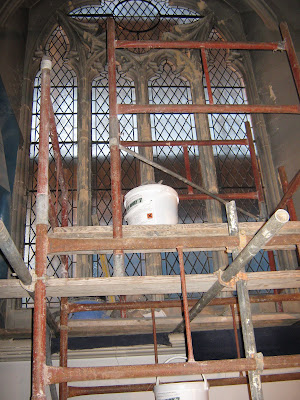 Unfortunately everything in the church is covered in this paint, all the stone windows are in a similar state though not quite in such danger of falling to pieces.
Even the fine carving of on our font is covered in it, the gilding is actually dull gold paint, it is the flash that has enlivened it. This panel of the font has had one application of "Peel Away", the stone is exactly beautiful but we'll see what the Masons come up with. 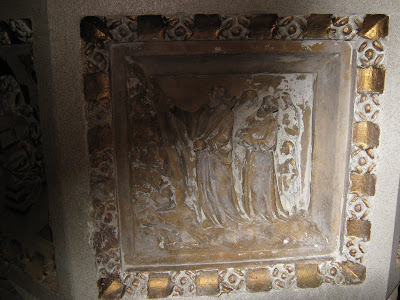 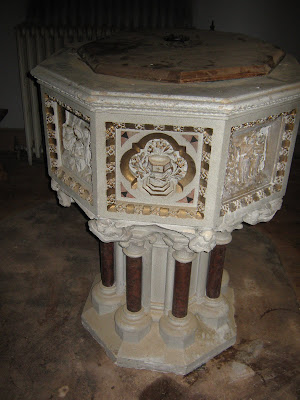 Masons in the Church?

Now, where did I put my copy of Leo XIII's Encyclical 'Humanum Genus'?

(oh - on second thoughts - I hope the comment came across as being jovial, and not petty and bitchy :-( )