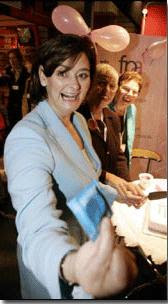 The American deacon Jack Sullivan who was healed at the intercession of Cardinal Newman, has repudiated a visit he made to Mrs Blair:

As soon as he was made aware of Mrs Blair’s record of public dissent from the Church’s teaching, Jack requested that all reference to meeting her be removed from the published recollections of his visit. The article on Times Online was duly amended yesterday (November 26th), but unfortunately Jack’s request came too late to remove the reference to Mrs Blair from the print version of the Herald.

The conjunction of Mrs Blair’s ‘conscientious’ dissent from the teaching of the Church with Jack Sullivan’s apparent endorsement of her could do harm to Newman’s reputation, and that is our reason for posting this clarification. Newman is indeed the great teacher of the rights and duties of conscience. It is of the greatest importance that his teaching is not used to make him the patron of Catholics, like Cherie Blair and others, who in the name of conscience practice dissent from the Church’s teaching.
The decision to arrange Jack’s visit to Mrs Blair, and then to publicise it under Jack’s name, has not contributed to upholding a true interpretation either of Newman, or of Cherie Blair. We hope that making public Jack’s desire, as far as possible, to reverse that decision, however, will do something to draw attention to the truth that is in danger of being obscured.

The Apostleship of the Sea used Mrs Blair to front its appeal  this year, a few weeks ago they rang around chasing up the money, that has not happened before. When I told them I would not be sending any because of Ms Blair's involvement and I had refused to display the poster displaying lest it scandalise the faithful, I got a silly snotty letter from the Development Manager Sheila Bailey, saying they didn't make judgements.
at November 28, 2009

I got a silly snotty letter from the Development Manager Sheila Bailey, saying they didn't make judgements.

I bet they don't, especially where money is concerned. Who is the bishop who oversees these apostolates?

Surely someone guiding Deacon Sullivan during his UK visit to the Oratories and the like would have been aware that such a visit to 'prominent Catholics' was to happen. One would have hoped that this particular visit could have been prevented.

Thank you, Father, for your stance against the AOS' disgraceful use of Cherie Blair in their appeal. Hopefully others will follow your lead, though I fear an uphill struggle, given the acceptance of this prominent Catholic family by leading members of the hierarchy.

My computer is out of action so I'm in the library operating at a speed of millimetres per hour:)

I emailed AoS when I heard they were using CB to promote their cause too only to discover later the very priest I thought would have nothing to do with this (a former fill-in priest in my local "catholic" parish who seemed to be better than the rest!) was up there grinning next to CB in all the AoS pictures. I know he is the sort of person who believes in the Mother Theresa approach - take the money from wherever it comes - but there's a limit Fr P and I hope you've learned your lesson!

Well done Father.Thank you for your example and leadership.

I don't think any of us who give to charity are blameless in anyway, and I think it was Mother Teresa who made the point that she was happy to use donations from any source in order to help the poor, even if some of the benefactors were a little less than wholesome. Is it not the act of charity that should be welcomed, irrespective of source?

On that basis, P Stanbrook, it would be right for me to accept a million poinds for the charity of my choice from someone who, in return would expect me to commit adultery with him.

I think it is called Real and Apparent good.