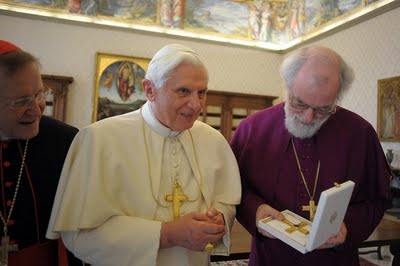 Paul VI full of emotion fell postrate at the feet of Athanagorius, Patriarch of Constantinople at their first meeting. When he met Archbishop Michael Ramsay he pulled off his ring and thrust it on the finger of the old Archbishop. Dr Williams wore the same ring, however unlike his predecessor, Benedict did not kiss it. On Saturday Pope Benedict handed Dr Williams a pectoral  cross, emblazoned with an amethyst - a little sign of being amongst the successors of the Apostles - the not drunk. When he received it Dr Williams rather frightened me, Gollum like, he said something about being, "very preshhhious". Later he said it showed the Pope acknowledge his "episcopacy", which is true, it acknowledge his "oversight" of millions of Anglicans. The gilt was slightly rubbed off the gingerbread of course by the Apostolic Constitution granting episcopal ornaments to those who were Anglican bishops.
The ecumenical situation has changed drastically, this wasn't the main Papal event of Saturday, the 20 minute audience freshortened by the photocall, was overshadowed by the meeting with artists.
at November 25, 2009

'the successors of the Apostles - the not drunk.'

Is that what successor of the Apostle's means? Oooooohhh, I better go and iron my hands.

sorry Father, the 'iron hands' quote is from Harry Potter! I thought it was from the Lord of the Rings, I'm such a Philistine.

No, a-methustos = not drunk.
The Apostles at Pentecost were "amethustos" "because it was the third hour".

If it was a gold cross then gilt couldn't come off it.

I hope the pope isn't giving away gold-plated stuff from a Ratner's sale.

Not all those present at Pentecost were Apostles (Our Lady, most notably). Likewise a pectoral cross does not signify a bishop (or are those abbots wearing them illicitly)

If an amethyst protects its wearer from drunkenness, Father, does it also protect him from muddled thinking?

Paulinus,
No. Amethyst definitely meant "bishop", and it was the bishop's stone in the Middle Ages, with reference to Aaron's ephod. Furthermore, as bishops were not drunk, and were generally thought to be wary of "drunkenness" (of mystical theology), unlike abbots.
This is all very well, but I think that all this kind of overcharged symbolism became a burden on the church of the Middle Ages, and was one of the reasons for its collapse.