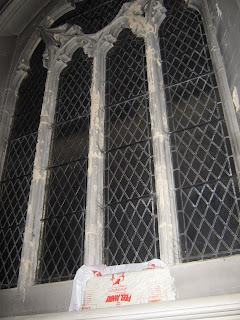 The west window has been steadily crumbling away, its that ****** grey paint again, the bath stone absorbs moisture which should then evaporate but the fruit of the 70s, the impermeable paint contains and it ends up dissolving the stone, worst things have happening on the outside.

Because we had a legacy of £10,000, the largest we have ever had whilst I have been here one we were able to afford to have it repaired, the biggest cost is scaffolding, even the smallest job on the outside of the church cost a minimum of £1,000 for scaffolding. Say a prayer for Margaret Wilson who kindly remembered us in her will. 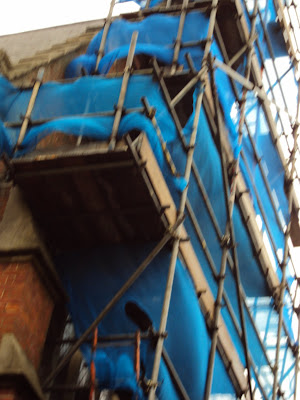 Eventually we need to scaffold the whole of the south side of the Church to repair the windows and replace mortar with which the church was repaired in in the 1970s, they used the wrong kind, now it is crumbling. Between us and the English Channel there is nothing so the Church and the house get the full brunt of the weather. Don't even ask me about the cost, I haven't even dared to ask. If God wants it done, he will raise the money!

Isn't there a "March to the Scaffold" by some decadent composer?

To quote (out of context) the Anglcan Flying Bishop of Richborough in London a couple of weeks ago, if it is the will and working of the Holy Spirit you will succeed. He, of course, was talking about something else!

"Eventually we need to scaffold the whole of the south side of the Church to repair the windows and replace mortar with which the church was repaired in in the 1970s, they used the wrong kind, now it is crumbling."

Hmm. I see a metaphor here.

Malcolm Kemp - the piece you mention was written by Berlioz. 'La marche au supplice' which has been rendered in English as 'March to the scaffold'. There is an interesting biography on Berlioz on Wikipedia - his mother was Catholic and his father atheist which must have made for some interesting conversations around the meal tables!

"The Scaffold"? I thought this article was going to be about the Reformation martyrs.

Thanks for the information and also for your comment on another blog. My intimate knowledge of the music of Berlioz is resticted to the Shephers' Farewell and I'm sick to death of conducting and/or accompanying performances of that every year!