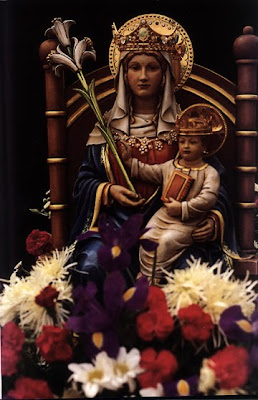 Let us pray, commending those considering union with the Catholic Church to the powerful intercession of the Most Blessed Mother of God, Mary Most Holy.

O Blessed Virgin Mary, Mother of God and our most gentle Queen and Mother look down in mercy upon England, thy dowry, and upon us who greatly hope and trust in thee.

By thee it was that Jesus, our Saviour and our hope was given unto the world; and He has given thee to us that we might hope still more.

Plead for us thy children, whom thou didst receive and accept at the foot of the cross, O Sorrowful Mother, Intercede for our separated brethren, that with us in the one true fold, they may be united to the Chief Shepherd, the Vicar of thy Son.

Pray for us all, dear Mother, that by faith, fruitful in good works we may all deserve to see and praise God, together with thee in our heavenly home.

What a beautiful picture of the Blessed Mother and the infant Jesus. I've not seen it, AFAIK.

This is, of course, the image of Our Lady of Walsingham and Walsingham is a place where Anglicans and Romans seem to get on as well as they do - and are currently allowed to do - anywhere. The relationship between the Anglican Shrine at Walsingham and Lourdes has, for example, never been stronger. The prayer Fr Ray quotes is well known at the Anglican Shrine and, although I'm not sure whether it is there currently, a copy of it has always been on display in the Holy House.

Difficult (and almost certainly)painful decisions decisions have to be made by many people on both sides of the Tiber. I know Our Lady will pray for everyone concerned and I hope we will all pray for each other. I hope everyone will be guided by the Holy Spirit and show Christian charity to, and patience with, each other. To me, the Pope's actions are a real answer to prayer.

Dear Gem,
I'm sure that anyone who has been to Walsingham will tell you that the picture you remark on, is one of the statue of Our Lady of Walsingham.
JARay

This is an interesting sentence, I thought

"Without excluding liturgical celebrations according to the Roman Rite, the Ordinariate has the faculty to celebrate the Holy Eucharist and the other Sacraments, the Liturgy of the Hours and other liturgical celebrations according to the liturgical books proper to the Anglican tradition, which have been approved by the Holy See, so as to maintain the liturgical, spiritual and pastoral traditions of the Anglican Communion within the Catholic Church, as a precious gift nourishing the faith of the members of the Ordinariate and as a treasure to be shared."

I wonder what will happen in the long term? Will Roman practice prevail or will English Catholics come increasingly to follow the Anglican traditions?

I found this on Patrick Madrid's blog, about a prophecy by King St Edward the Confessor:

Ambrose Lisle Philipps in a letter to the Earl of Shrewsbury dated 28 October, 1850, in giving a sketch of English Catholic history, relates the following vision or prophecy made by St. Edward:

"During the month of January, 1066, the holy King of England St. Edward the Confessor was confined to his bed by his last illness in his royal Westminster Palace. St. Ælred, Abbott of Rievaulx, in Yorkshire, relates that a short time before his happy death, this holy king was wrapt in ecstasy, when two pious Benedictine monks of Normandy, whom he had known in his youth, during his exile in that country, appeared to him, and revealed to him what was to happen to England in future centuries, and the cause of the terrible punishment.

They said: 'The extreme corruption and wickedness of the English nation has provoked the just anger of God. When malice shall have reached the fullness of its measure, God will, in His wrath, send to the English people wicked spirits, who will punish and afflict them with great severity, by separating the green tree from its parent stem the length of three furlongs. But at last this same tree, through the compassionate mercy of God, and without any national (governmental) assistance, shall return to its original root, reflourish and bear abundant fruit.'

After having heard these prophetic words, the saintly King Edward opened his eyes, returned to his senses, and the vision vanished. He immediately related all he had seen and heard to his virgin spouse, Edgitha, to Stigand, Archbishop of Canterbury, and to Harold, his successor to the throne, who were in his chamber praying around his bed." (See "Vita beati Edwardi regis et confessoris", from manuscript Selden 55 in Bodleian Library, Oxford.)

The interpretation given to this prophecy is remarkable when applied to the events which have happened. The spirits mentioned in it were the Protestant innovators who pretended, in the sixteenth century, to reform the Catholic Church in England. The severance of the green tree from its trunk signifies the separation of the English Church from the root of the Catholic Church, from the Roman See.

This tree, however, was to be separated from its life-giving root the distance of "three furlongs". These three furlongs are understood to signify three centuries, at the end of which England would again be reunited to the Catholic Church, and bring forth flowers of virtue and fruits of sanctity. The prophecy was quoted by Ambrose Lisle Philipps on the occasion of the reestablishment of the Catholic hierarchy in England by Pope Pius IX in 1850.

What a pity this excellent and generous exhortation was dropped from prayers after Mass. Perhaps political correctness applied even in the sixties.

I'm hoping that the Sarum Use will be approved as a "liturgical book proper to the Anglican tradition".

This prayer is part of the Benediction service and not one of the prayers after Mass.

"Will Roman practice prevail or will English Catholics come increasingly to follow the Anglican traditions?"

I would hope and pray that whatever happens, the TLM will always be available to me, as it is the purest form of worship that I have ever found. Any priest recognised as such by Rome would be fine. I would also love to experience the Sarum Rite!

At the end of Benediction in my pre-conciliar memory. Not at the end of Mass. But yes, pc did away with it in public. Nothing to stop it in private though.

What matters above all is not the particular form of the liturgy. What matters is that it truly confects the Eucharist and gives us the Body and Blood of Christ.

There are many liturgies, actual and possible, that have the form to do this, and although we will be at home with one of them we should be able with equanimity to attend Mass in any rite.

Be careful not to allow personal taste to determine for you the 'purity' of a liturgy (I think I owe John Henry Newman for that).

Michael - I hear what you are saying - and 3/4 Masses I currently attend are NO. As a classical musician, I do not deny Beethovens greatness and his music moves me - but I have a more emotional response to Bach's or Byrd's music for the Mass. I went to the most beautiful TLM Mass on Friday - and it is with me still.

What matters above all is not the particular form of the liturgy. What matters is that it truly confects the Eucharist and gives us the Body and Blood of Christ.

Careful, MP! This represents a peculiarly Catholic species of iconoclasm pure and simple, born of the scholastic alienation of liturgy from sacrament, boiling everything down to systems of"minimum conditions" for "validity". I urgently recommend Mosebach's Heresy of Formlessness as an antidote. It's precisely this mentality, far, far more than "modernism" even, that brought about the liturgical trainwreck.

How is it possible, for example, to give an account of the essence of the Eucharist, in which eucharistia finds no mention at all?

"Anglicans and Romans"? Good heavens! No Roman me - and no anglican either! Just an Englishman and a catholic very familiar with the Prayer for England which father cites.