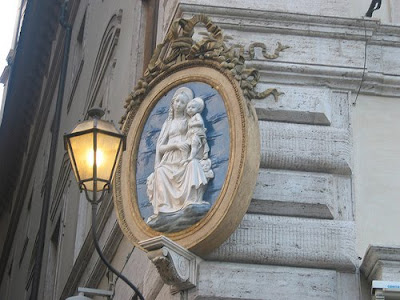 Most of the Italian press is in an uproar against the Strasburg ruling that the presence of a Crucifix in an Italian, state funded, school is against some woman's human rights.
Italians argue it is part of their culture, in England we have some sympathy for the woman, so sensitive are we such rights.
Just imagine if Crucifixes are banned in schools, they would also be banned in courtrooms, where they hang over the judges chair. If this woman gets her way the next step would be to remove from the streets those little shrines which seem to be on every street corner. In Rome it could mean the removal of the statue of the Virgin from the Piazza da Spagna, or the veiling of images on the outside of churches, the banning of those noisey city patronal processions or the banning of holy images from cafes and shops, and ultimately forbidding Italians from wearing a crucifix in public.
If that were so, alas, Italy would become, err, England.

As wonderful as the European dream is, without the principle of subsidiarity states will lose their national identity.
at November 04, 2009

I saw this on the news this morning and was taken back. One argument I heard was that it was so children could decide what religion they wanted to follow. Well, it hasn't stopped people leaving the faith if they wanted to, has it? I find many non-religious people are completely ignorant to the fact of how important it is for children to be brought up in the faith. It's hard to imagine Catholicism as a faith where the parents are practicing, but don't baptise the children or send them to Catholic schools. Bizarre, bizarre, bizarre!

This is *precisely* why a "european dream" is a nightmare.

Excuse me, but some hack who bribed his way onto some court which is accountable to NO ONE gets to decide such things about another country?

[And people wonder why a significant nunmber of Americans want the US out of the UN and the UN the hell out of the US. Let them hold their confabs in some hell hole in Mobassa or Strasbourg.]

Italy needs to man up and tell them to kiss their keisters. How about "when hell freezes over, you and WHAT ARMY?"

This is as insane as the idiot spanish court who ordered baptismal records stricken. What in Hades goes on over there.

I guess it's only a matter of time before atheists start running through the Tate gallery and are given free rein to slash religious paintings.

This nutty woman, her legal 'parasite' advisers, all the hangers-on and the court officials should be brought to book and made to pay the costs of this absolute and total waste of time and money!

Don't the Italians have anything better to throw money at? As for Strasburg - why don't they just mind their own business and put their own mess of a house in order.

The PC Imbecillium who brought this nonsense to court in the first place will have some explaining to do for denying Our Blessed Lord when he/she wakes up on the shores of eternity....

Still, I do love Italian coffee and Pizza da Spagna is my favourite Yummy! - Italians are not really all bad! :-)

As with the Freedom from Religion lot here in the US, minorities (in this case one woman!) seek to impose their will on the majority. As one Italian journalist asked "Where will this end?" and cited the logical conclusion of eliminating all religious references from the public square in the need to change the names of cities, buildings, streets, schools etc.

We'd have a problem with that here in the US: Los Angeles, San Francisco, Corpus Christi, St. Augustine - to name just a few!

Yes this is bad news and I agree that the European dream is becoming a nightmare.

GOR wonders where it will stop. As far as I know nobody has yet complained about the names of some of the Metro stations in Paris but give it time ??

When visiting Paris recently I got out at or passed through stations named Cardinal Lemoine, St Francois-Xavier, St Michel, St Ambroise, St Paul, Filles du Calvaire, Pere Lachaise and of course St Lazare? (Lazarus)A fraction of those with a religious connection. Will these familiar stations one day have to change their names? Nobody has yet complained about the name of the three stations at Villejuif. If just one person complained as it appears has happened in Italy would this mean the end of these names?

Where will it end indeed - atheists running amok in the Tate gallery is quite a vision of gem's. This ever more secularisation of Europe is deeply worrying but we must not forget the significance of the 12 stars on the European flag. Rumour has it that it was designed knowing that the Protestant nations would not understand their significance!

I suppose if they banned Church Steeples it would save us the forthcoming expense of repairing ours without the embarrassment of it falling about our ears.

"If people are ashamed of me and of my teaching, then the Son of Man will be ashamed of them when He comes in his glory and in the glory of the Father and of the holy angels." Luke 9:26.

Victor S E Moubarak has put his finger on the button!

Luke 9:26 is a Gospel passage that should shake you to your very foundations. We should contemplate this very carefully, examine our consciences, think of the many ways in which we have all denied Jesus one way or another, weep for our sins and go to Confession at the next opportunity.

The horror is unimaginable should Our Blessed Lord deny us at that moment which is surely coming to each and every one of us.....

And lest we forget, it is we who condemn ourselves by our thoughts, words, actions and intentions. It is also sinful to 'presume' on God's mercy and just carry on as we are.

Quite right. Clearly this is something the British and US, the world's leading defenders of human rights, need to be involved in to impose, if necessary by force. A task force should be sent in.

Isn't it time also that the Scandinavian countries were made to change their flags, all of which display a cross, which is a highly offensive symbol. And if they refuse, they must be invaded and made to comply - these benighted lands must be brought into the twenty-first centuries and ensure that nobody is upset by the sight of this evil emblem.

As a deeply pro-European person (Catholics in the Anglo world would do well to remember that pretty much *all* the founding fathers of Europe were devout Catholics), I have been badly shaken by this judgment.

That said, I think it has less to do with Europe, and more to do with the dismaying trend across the West towards activist Courts making laws that the people would never support in a vote. Such activists are invariably leftish anti-Christians.

We all want to live in societies governed by the rule of law, but it is elected representatives who should make the law, not lawyers and judges!

It would become England...

only with way better weather and much nicer wine.

Always bare in mind the ultimate outcome, if only for hopes sake.
"It is written: 'As surely as I live,' says the Lord,'Every knee shall bow, every tongue confess, that Jesus Christ is Lord'.

All shall be well.