Why is the new BBC Historian so angry with the Church? 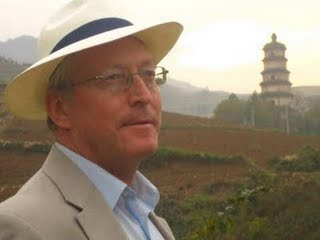 BBC Four are launching a "landmark" series based on Professor Diarmaid MacCulloch's weighty tome "A History of Christianity", like his book he is no light weight. Catholics listening to the radio lately will not be surprised that he has been invited to to comment on the the Holy Father's response to that group of Anglicans who have requested unity. What has surprised many of us is MacCulloch's vehement hostility, even hatred, which he seems to express with regard to the Pope. This does not bode well for a balanced television series funded at Catholic licence payers expense. Read this little piece he wrote in the Guardian.

I thought MacCulloch, because of both his hostillity and his name, might have been a "former" Catholic, he is in fact the son of an Anglican Suffolk rector, he himself was ordained an Anglican deacon, though he did not proceed to the priesthood. A clue to his anti-Catholicism might be connected to his involvement with the (now Lesbian and) Gay Christian Movement from 1976, serving twice on its committee and briefly as honorary secretary.
Like David Starkey, it would seem Diarmaid MacCulloch's anger and view of history, of Christianity's present situation is framed by his sexuality: nasty Church teaching sexuality should be controlled rather than given free licence. Why is it these two historian specialise in the Tudors and the English protestant reformation.
I was pleased the Sunday Programme invited a bright sun of the new Benedictine counter-reformation to oppose MacCulloch.
at November 03, 2009

Does the Sunday Programme always invite Catholics of this intellectual calibre, or has it cleaned up its act after the recent complaints?

Yet his book "Reformation: Europe's House Divided" (2004) is an excellent book which at times is surprisingly pro-Catholic, speaking very well of Cardinal Pole, comparing the Inquisition favourably with contemporary secular courts. and disposing nost efficiently of the Anglo-Catholic interpretation of the Elizabethan Settlement. He see the C of E has having begun as a Protestant Church recognised as such by other Protestant Churches. It is a massive work of scholarship.

Since in the introduction to his book he says that "he does not subscribe to any form of religious dogma" one can only speculate as to what indeed he does believe.

DDD,
DM is certainly not a Catholic I thought Dr Rreid did rather well.

He is a good historian but not of contemporary history as his account of events since the 1960's as evidenced in his "Guardian" article reads like a parody, even though there is some godd information in it. MacCulloch the politician would seem to trump MacCulloch the historian. One would expect a certain respect for a fellow scholar of the eminence of Professor Ratzinger and some understanding of his theological position. However this does not seem to be the case.

I agree with Independent, MacCulloch's book "Reformation: Europe's House Divided" is excellent, just don't read the last chapter. In it he clearly comes out in favour of Kung and Herbert McCabe and their views on Humanae Vitae. He feels that Christianity is one faith among many and can not claim to be a repository of the Truth. He feels that John Paul II has sent the Church back to the days of Charles Borromeo, and thinks this is a bad thing.

Isn't McCulloch a protegee of Eamon Duffy? This may explain his scholarly excellence. It is just a shame he so obviously has an axe to grind.

I thought he came over as really quite nasty on the Sunday Programme - I dread to think what the TV series will be like. I thought Alcuin was excellent - well prepared, lucid and balanced.

Paul Johnson skewers him in a review in The Spectator of his latest book:

Yet the book as a whole is dull, and a struggle to read. One reason is MacCulloch’s unwillingness to commit himself. He writes: ‘I come from a background in which the Church was a third-generation family business’ (note the word ‘business’, not ‘calling’). He adds: ‘I remember with affection what it was like to hold a dogmatic position on the statements of Christian belief.’ But he does not say what he believes now — whether, for instance, Jesus was the son of God, and rose from the dead, or if Christianity is the true faith. What he does say is: ‘I would now describe myself as a candid friend of Christianity.’ Many would find this insufferably condescending, and I would do myself if I were inclined to take the professor seriously.

The reason I find him essentially a comic figure is that, while obviously successful at his trade (and a great collector of literary prizes), he appears to be absolutely terrified of offending people, especially powerful groups who know how to use their muscle.

Sorry - I was referring to Dr Reid and Anna Arco as the intellectuals. The contrast is with the position at the BBC highlighted in many other blogs, where well meaning, but less media-savvy Catholics are thrown to the humanist and liberalista lions.I did not make myself clear. The presenter did the usual sneaky trick of contradicting Dr Reid then moving on without giving him a chance to answer it - but otherwise both he and Anna arco (in a different segment) spoke well and rationally.

I must beg to differ and say I found Professor MacCulloch rather fair in his treatment of the subject, not angry at all.

I am looking forward to his series.

Better than being ignored, methinks.

I detect Post-Modern jargon in the article. That is probably the key to his views. Don't forget that Post-Modernism arose out of the wreckage of Marxism, it founding fathers being, amongst others, Jacques Derrière, Michel Foucault and various other Sorbonne layabouts (sorry, intelligentsia) of the 1960s.

How many more vitriolic, vituperous, anti-Catholic bores can the BBC wheel out of its closet, which seems to be the size of Dr Who's Tardis to be able to house so many with an axe to grind!!!!

It's all to do with the BBC's 'hermeneutic of continuity' which is to pour hate, hurt and scorn on anything Catholic at every opportunity.

Mass burning of TV licences outside BBC House I say!!!! Why do we put up with this????

Old Believer - this from MacCulloch in his Grauniad article is hardly 'fair and not angry' wouldn't you say:

"Benedict's idiosyncratic version of ecumenism overturns all the careful negotiations between the mainstream churches built up over the past half century".

Not even the courtesy to address Benedict as Pope Benedict, and I doubt he is on first name terms with our Holy Father!

Here we go again 'Catholic Bashing', every time the Pope is attacked we know he is on the right path

Anyway every one is too bogged down with X Factor to bother with some historian/anglican deacon with both spiritual and developmental problems.

Rita - MacCulloch obtained his doctorate at Cambridge. He was a research student under the guidance of Elton, who fostered a whole school of first- rate Tudor Historians, including I believe Scarisbrick and Starkey. Duffy's supervisor was I think Owen Chadwick. Among Kitson Clarke's students was Edward Norman and Sheridan Gilley.

Paradoxically MacCulloch by exploding so many popular myths about the English Reformation may have helped the progress of what Fr Aidan Nichols calls "Anglican-Uniatism". Perhaps that is one of the reasons he is so polemical in his "Guardian" article.

Au contraire, I would agree with the Professor's assessment of Benedict.

The more idiosyncratic, self-advised and independent Benedict XVI's actions are the more likely an appalling backlash and reveresal in the next pontificate. That is the aspect that is likely to be damaging in the long-term. On this particular issues the numbers of 'papalist' Anglicans who accept, the as yet unpublished, offer remains to be seen

I think Professor McCulloch was politely critical, rather than hostile.
He is right in thinking that both Roman Catholicism and the Anglican Communion have divisions. Religious blogs contain plenty of evidence of that. Indeed I think it is arguable that the greater freedom of dissent among Anglican bishops and clergy leads to more courteous disputes - they set the tone, rather than contentious lay people.
I do not see the relevance of the Professor's apparent sexual orientation, although some Roman Catholic teaching on the subject would I think be some excuse for asperity on his part, were he to show it.

John,
I think his sexuality has a great deal to do with his view of the Tradition, which Benedict epitomises. Those who oppose him and his predecessor often do so precisely because they oppose any institution that teaches sexual restraint.

Old Believer - personally I will stick with the Holy Father's pastoral, moral and spiritual leadership and leave MacCulloch to wallow in his profane BBC celebrity status.

Compared to Pope Benedict XVI MacCulloch is nothing but a pompous ass of a 'pin-head'.

Bruno - you are absolutely on the nail with your comment. When people miss-behave (and they know full well that what they do is wrong) they will use anything, any argument however idiotic, every attempt at a 'put-down', every trick in the book of 'verbal gymnastics' to attempt to justify their behaviour.

Rather than admitting they are wrong and attempting to change for the better (which calls for humility, a contrite heart and the Sacrament of Confession), that most ancient human sin called PRIDE takes control and the devil whispers the old lie, 'you shall be like gods'.

Physiocrat
I think you meant Jacques Derrida. Or was your comment a witty reference to the orifice from which Derrida's pearls of wisdom slipped?

Oh dear, you are right, silly old me!