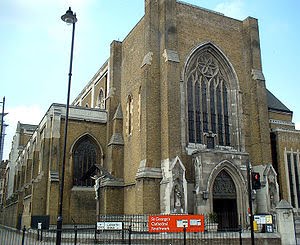 I receive the press release from Nick Gale the inspired, young Musical Director of St George's Southwark Cathedral, he asked me for what I might suggest as a useful further project, but my mind is blank at the moment, so ...any ideas?

This week sees the release of the first of three discs of Gregorian Chant produced to assist musical directors, cantors, choirs and congregations learn a Chant repertoire for use in the Liturgy. The discs were recorded by Signum Records, London, and the Chant is sung by three members of the Choir of St George’s Cathedral, Southwark, London, UK and recorded in the Cathedral’s beautiful Lady Chapel under the direction of the Cathedral’s Organist and Master of the Choristers, Nick Gale.

The first disc, Chants of the Ordinary, contains a selection of Mass ordinaries (Kyrie, Gloria, Sanctus, Agnus Dei, Ite and Benedicamus Domino) – including complete recordings of Masses I, VIII, IX, X, XI, XV, XVII & XVIII, the Ambrosian Gloria, Credos I, III & VII and a selection of Alleluias. The second and third discs will be released next month and will contain chants for the entire Liturgical Year – all four Marian Antiphons in simple and solemn tones, the Te Deum, chant hymns, antiphons and responses for Advent, Christmas, Candlemas, Lent, Holy Week, the Easter season, Pentecost, Trinity and Christ the King – as well as some more general material and a selection of manageable Communion Antiphons from the Graduale Simplex for general use.

The Discs are priced at GBP £!0 plus £2 P&P (£3 for orders outside the UK). To place an order or to ask for a full track list or any other details email nick@gregorianchant.org.uk Courses in Gregorian Chant in the UK and abroad are also available through www.gregorianchant.org.uk

They are free of charge and
they covers all 3 liturgical years.

Here's an example on youtube of their offering of Kyrie IV: