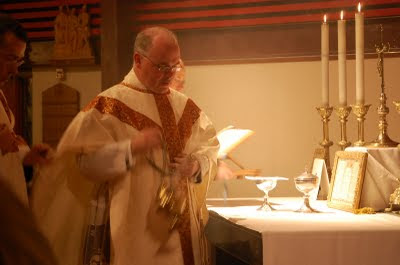 Fr Sean Finneagan has two fascinating pieces up today:
One which has just appeared is from Paix Liturgique which speaks about the desperate situation of practically all French dioceses, except Fréjus-Toulon, which are fast running out of priests, the more liberal have one priest serving 60 churches. The difference with Fréjus-Toulon is that it welcomes priests who celebrate both forms of the Roman Rite, consequently his seminary is full.

The other worthwhile read continues his excellent series on the Pope's invitation to Anglican's, in which he speaks about the difference in Catholic and Reformed belief. Basically, saying being Catholic is about accepting the Catholic Church's teaching rather than individual doctrines.
at November 07, 2009

"the more liberal have one priest serving 60 churches."

If you are referring to the Diocese of Langres (as Paix Liturgique does) then this figure is very suspicious.

The website of the Diocese shows that many of the parishes include 10 or 20 or so villages.

There is one priest for this Parish and he says one Mass each Sunday. So one priest serves a population of 4276 living in and around Chateauvillain. For a rural parish that seems to be quite a good ratio.

Are we to believe each of these 19 villages boasts three churches?

Anyone who wishes to check the stats for other Parishes in the Diocese of Langres can look here:

Bryan Dunne,
Looking at the website, I can well imagine if one is on holiday, another one or two are sick that a single priest looks after 60 churches. Look at how old many of the priests are I am sure that some would be incapable of travel or celebrating more than one Mass on Sunday.

I had a look, and the stats didn't seem suspicious to me:

If I understand correctly, until 1998 the 500-odd communities of the diocese of Langres had 500-odd churches in 400-odd parishes. Since then the diocese has been organised into 31 parishes served by 34 active priests (including religious). So that's probably approaching 20 churches per priest on average. The parish priest of St. Pierre-St. Paul also serves the two other large parishes in his deanery, each of which covers about 20 villages. As of 2008, of the 61 priests of the diocese, 41 were over 70 years of age.

Very interesting indeed and thanks for posting this.

I knew there had to be a divinely inspired reason why the Autoroute du soleil and the Provence extension to the TGV line were constructed.

It's so that the French will be able to attend Mass in the 21st Century.

The Tridentine Mass (aka Extraordinary Rite) will be the healing elixer.

Thank you father for providing the link. Very interesting.

It appears that there is two main options:

2) Start handing over some of the Churches to traditional orders, or at least encourage the new priest's coming through to celebrate the Traditional Mass.

It appears that some Bishops would prefer the first option.

This is exactly what is happening in a number of parishes in Germany. It is usually a sister is in charge and when she tells blow in father to jump he says "how high?"