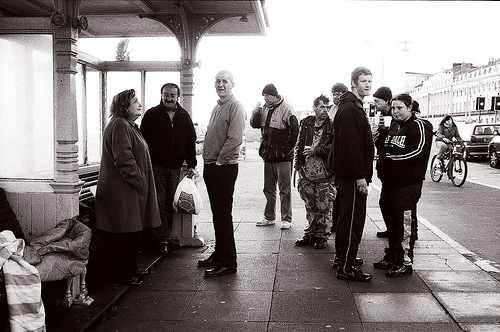 The Bones has a peice on the Government wanting, possibly, to ban soup runs. For the past 30 years our parish has run one: day in, day out small groups of parishioners and their friends prepare food and take it down to the seafront and feed anyone who turns up. The photograph he uses was taken of our soup run some ten years ago.

It is interesting that in Westminster some charities that work for the homeless are against soup runs.

There are voices in the local council who really don't like what we do, suggesting it attracts the homeless and makes Brighton more "homeless friendly", others have said "food for free" encourages a degree of fecklessness, others just object to the possibility of "litter". It is true that during the 30 years we have had to move away a residential area to the open space of the promenade, it can be intimidating to gather 30/40 homeless people together, some of whom might be high on drink or drugs, or just anti-social. For myself I can understand misgivings, if we give someone a sandwich are encouraging him or her just to save the cost of feeding themselves in order to spend the money on booze, well I suppose better for them to have the money to pay for it rather than to have no money and steal from the local small shopkeeper.

There is a difference between "soup runs" done in the open and "soup kitchens" done in a building. "Soup kitchens" can offer a lot more pastoral care, a little counselling, referral to more specialised services, they can also have better trained staff on hand. Our soup run simply feeds, and depending on who is feeding that night might do a bare minimum of referral.

The advantage it has over the a "soup kitchen" is that it is cheap, we do it for £15 a night, which the parish pays, plus any treats helpers might bring. The whole thing is rather impromptu, people arrive wanting food, just before 7pm, those with food arrive at 7pm, food and drink is distributed and by 7.30pm it is done.
It is popular.
One of the reasons is that many homeless people have a real aversion to being enclosed in a building, or faced with an interrogation they can't escape. They preferr being in the open, there are no hoops to jump through, helpers might get to know someone's name, or at least the name they give, even their life story, but there is no form filling, no registration, no hassle, no expectation of interaction. So many of those who come have a phobia of any invasion of privacy, they don't want to be sucked into a process that is going to get them off the street, or anywhere else.
They often fear a loss of the little control they have over their lives. Some, on their way "down" or "up" don't want to even tell other people or even themselves they are in need of food. Others don't want involvement with other homeless or needy people, who can be quite frightening. At our soup run they can, if they wish, merely be on a nodding acquaintanceship with other people in need.
at March 04, 2011

This is very good to read. Long time since I have been in Brighton but even then it was a fading dowager. Rhyl is a similar sea-side town that now has problems when it was formerly a thriving resort. I like Bones's practical Christianity and courage to question fine words not translated into action. Good Luck with your soup-run casual visitors who you will probably meet again in Heaven- "For the least..."

My wife has worked in the homeless sector for over ten years, and as you say, many in the sector are opposed to soup runs. The problem with them, as she articulates it, is that it simply allows people to be sustained in a homeless life, rather than move on from their current situation.

Whilst it can be deceptive, with the benefits which are made available to people, there is nobody who should not have enough money to buy themselves food from what the state gives them (I am excepting those immigrants who are "no recourse to public funds"). The unfortunate fact, however, is that many of them spend what money they have on their addictions, rather than on food. Whilst it is a harsh message to say "do not be compassionate", sometimes it is simply maintaining someone in a destructive lifestyle.

Susan - My experience of working with the homeless was that they were all 'Friends of God'.

I humbly hope to meet them in Heaven.

Brush them away, out of sight, out of mind, then our leaders can claim there is no homelessness.

MH,
Yes, but so many homeless are so damaged they don't want to get out of that lifestyle. The nanny state says, "they must", they seem to say, "we can't" or at least "not yet".
I am not sure myself, I am by nature bossy but the Christian view is "Feed the hungry" and change comes through Grace not coercion.

MH - this is Broken Britain. Some people are so damaged and their circumstances so bad than they use drugs as their escape route. Consider yourself lucky if you can use Eurostar or Ryanair as your's.

Your government sounds much like the Democratic party in the US. They have created a 'dependent' class and want these people to feel obligated to the government for their subsistence.
Helping to move people away from this dependency is not acceptable.

The moral 'problem' of soup runs seems to arise most when soup runs take place in the vicinity of high property values. This is the problem in the area surrounding Westminster Cathedral: lots of poor people a little too close to millionaire properties. I'd suggest anyone worried about 'sustaining destructive lifestyles' to try spending a week or so out in the open air without recourse to drink or drugs. I imagine that in many cases the homelessness comes first.

"For myself I can understand misgivings, if we give someone a sandwich are encouraging him or her just to save the cost of feeding themselves in order to spend the money on booze"

Trust me Father, food is more or less irrelevant when you are drinking. If people need or feel like eating, they are beginning to feel well and have a bit of hope restored.

Don't you see Father? I think Laurence does, what you are being to wounded man(I include myself), with this act of charity is simply this:

their shield, their strength, their portion, deliverer, their shelter, their very present help, in time of need.

God bless you and sustain you.

A couple of spendid blogs from the Bones and Father Ray. At least the LSE lecture focused attention on charity NOT beginning at home. The audience returned to their comfortable flats avoiding all beggars and homeless along the way.

"David Cameron made a law under which the police arrested you, and you were prosecuted and punished.

We need to build Monasteries in our communities.

They would be places of prayer and penance, and help to the poor.

Men would till the soil, raise cattle and the women would cook, sew, teach the children, and so on.

Much in the same manner that was done before the king in England took the Monastery property to sell to his friends.

(the families that bought the properties no long exist; God made their wives barren, and their noble bloodlines ceased.)

It would not be difficult to establish these Monasteries.

I'm haunted by the man in the middle of the photograph. He looks wretched. Was there ever a picture that so personified how we think of a suffering, homeless, maybe alcoholic person.

BUT, they can also look "respectable". They shave in public loos attempting to keep up appearances. They can have had affluent backgrounds, losing careers, family, homes.
If we cannot always feel compassion, at least we can feed the hungry for practical reasons. It will probably stop the house next door, or mine, from being ransacked for cash. These people are sometimes desperate.

Father Ray, after all beautiful pictures and heated discussion on liturgy, it was so re-assuring to learn of your soup-run.

"I was hungry and you fed me" "I was naked and you clothed me" I was blest to meet Mother Teresa on many occasions. It is simple she used to tell us "It is Jesus in the most distressing disguise of the poorest of the poor, love him it is simple" Recently our dearest Holy Father said"Blessed Teresa of Calcutta lived love for everyone without distinction, but with a preference for the poorest and most abandoned: a luminous sign of the fatherhood and the goodness of God. She knew to recognize in each person the face of Christ, who she loved with her whole self: the Christ who she loved and received in the Eucharist she continued to find in the streets and pathways of the city, becoming living "images" of Jesus who crosses over the wounds of man with the grace of his merciful love.

Father, keep up the good work, it is simple , it is love in action.

It would be instructive in this context to look at the excellent presentation on eugenics by Fr John Fleming linked to Fr Finigan's blog. The dismissive and punitive attitudes towards the poor among the opponents of soup runs (and some political conservatives) look remarkably like the views of the eugenicists.

Being new to the blogosphere I cannot tell if people are being sarcastic and wonder if there is any way of indicating that a comment is sincerely meant?

"Saint Michael come to Our Defence"
seemed genuine but the remark about God making women barren and no mention of the value of convents and sisters who are not restricted to cooking and sewing doesn't seem to fit the rest of the blog commentary.

Somebody has to help the unfortunate and it certainly won't be the Humanist,Secularist Heathen.

There may be benefits to be had from the "Caring Nanny State" but you would be expected to jump through hoops to get them.

I am as right wing a Tory as you are likely to find, but I find absolutely nothing wrong in "Soup Runs". In fact, I congratulate you and your parishioners in your efforts.

One of the problems of local government is that it is "local", so Councils such as Westminster are free to make bye-laws often at variance with national government.

Well done, Father, this "right-wing" Tory wishes you all the best.