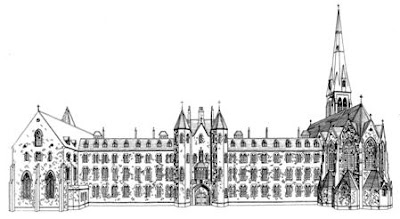 Rorate reports that Maynooth, the only remaining seminary for secular clergy  in Ireland may close following the Apostolic visitation, and all future Irish students for the priesthood will be formed in a restructured Roman Irish College.
Whether the other reports of the Apostolic Visitation are going to be as radical remains to be seen. There were suggestions that the number of Irish dioceses may be substantially reduced.
Is there a trend to close local seminaries, and move students to Rome, at least it happened in Scotland: will it happen in England too?

Since posting this Fr Tim Finigan sent this link in which these rumours are said to be withot foundation.
at March 23, 2011

The President of Maynooth says that the report is "without foundation". (UTV News article)

Yes, Maynooth has come a long way. Standards there really fell after the Second Vatican Council (see "The Church in Ireland since Vatican II" [The Furrow, December 1979]).

The standards were falling for a long time but ruddy good in comparison to anywhere else.

If it's that bad the better option might be to sack the staff and rebuild with better stock.
The existing seminarians would have to go elsewhere for a year but would return to a renewal (yes, that word)in orthodox formation.

Not all Scots diocesan seminarians are in Rome. Elsewhere there are some from the Diocese of Argyll and the Isles - in Maynooth!

Father this may be of interest

Shane's link has some interesting comments one of which mentions someone who for 16 years was a professor of Theology at Maynooth; 10 years its president; 17 years advisor to the Holy See on Theological matters.

Impressive. He defected to a new Age sect in 2005 and is now a member of the Ramtha School of Ancient Wisdom whatever that may be. He has a blog called The Hamburger Universe. You could not make it up!