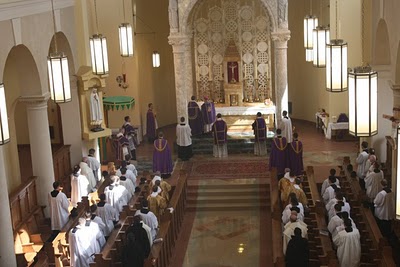 John Allen doesn't always get it right, often he does though, in his latest piece he is saying that the follow up document to Summorum Pontificum is going to, a) insist on seminarian being taught Latin, the language of the Church and b) that they should be trainined to say the Usus Antiquior.


... the instruction will confirm that the moto proprio is now the universal law of the church, and insist that bishops apply it. Among other things, it will call for seminarians to be trained not just in Latin, but in the older rite itself, at least so they will know how to execute it faithfully and understand what’s being said.
The instruction will also confirm that the older Mass must be available wherever “groups of faithful” request it, without specifying how many people it takes to constitute a “group.”

The implications are that the Roman Rite, clearly, now has two parts and that the Pope is using seminarians and seminaries to push forward his reforms. Seminarians, presumably, are going to be able to be a "group" who are going to be able to request the Usus Antiquior.
What will happen if a non-EF saying bishop or lecturer turns up and the request for the Traditional Mass is made? Ultimately it is going to mean no priest is going to not be able to say the Traditional Mass.
Once these seminarians are ordained they are going to want to say the EF in parishes - some even more or less exclusively.
I suspect it is not just the liturgy the Pope wants studied but the spirituality and theology too.
That, if it is true, is going to shake the Church, just a bit!
As for the Minor Order, which is one reason why Ordination in the EF has to be something applied for to Rome, is it it possible that they were never really abrogated just as the EF was not?
at March 25, 2011

I really do hope our Church will implement the teaching of Latin and the Liturgical EF within our Seminaries because it is our tradition that needs to be transmitted to future generations. I have pondered on this issue for a long time.

I suspect that the Church will only fully recover from its
post-Vatican 11 debacle when the liturgy is restored. The "Reform of the Reform" is now well under way in the Ordinary Form of the Mass but has a long way to go before we are back to what the Council actually asked for, nevertheless, in most churches we can see evidence of
re-sacralisation. We owe a lot to the perception of Benedict XV1.

In this process the Extraordinary Form of the Mass will be the standard by which the Reform will be measured.


That the Extraordinary Form will return is now without question.
The number of priests training through the LMS schemes etc., and now with the changes in the seminaries, as well as the much higher recruitment rate into the tradional orders will ensure that the Extraordinary Form of the Mass will figure prominently again in the liturgical life of the Church, even in ten to twenty years time.

On the question of minor orders and ordination in the EF, it occurs to me... following V2's resurrection of the permanent diaconate (often overlooked by those on both sides, but IMO a good thing), would their re-institution require the re-instution of permanent minor orders?

If so, I can't think of any good reason for not doing it, aside perhaps from the reduction in the number of priests?

Seminarians should be trained in Latin. Bl. John XXIII called for that 50 years ago in Veterum sapientia.

A Protestant recently asked me how it could be possible for priests of the Latin Church to despise the Latin language. I had no answer.

Regrettably, Veterum sapientiae ha been honoured more in the breach that in the observance since the day it was promulgated. We must pray that Papa Benedetto's instruction will fare better.

In an Ordinariate Church, yes.