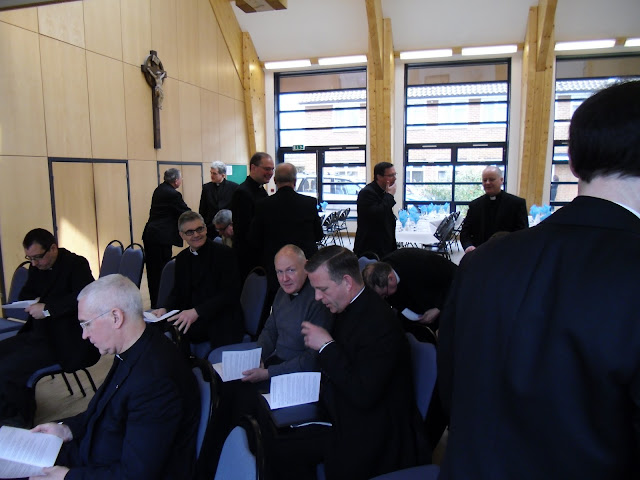 Today I was at the meeting of the Southern Chapter of the new British Confraternity of Catholic Clergy. The very affable and clever Fr Aidan Nichols OP gave a paper: Priesthood and the Conversion of England. I think I would do him a disservice if I try to summarise his paper here, someone else will do that on the website in the next few days.
We are still at the "getting it going" stage, drafting a constitution, opening a bank account; the website was launched on the Annunciation and therefore the "public" invitation to the meeting had just gone out, so it was quite good that just over 20 priests from, I think, five or six of the southern dioceses came to the meeting. Already there are twice that number who have signed up to join, not bad in just a few days, some have been quite generous in priming the pump financially, apparently.
I am quite excited by all this, especially as most of the clergy there were young and bright, focused on the mission of the Church and on the vision of Pope Benedict. It is so good and refreshing to meet young priests who are so evidently searching for holiness, who aren't grinding axes or pushing their own agendas. Certainly amongst them are one or two men who will make good future bishops.
Above all the idea in the discussion and conversation seemed to be that those present wanted fraternity, and to find encouragement amongst one another in being good dedicated priests.
I was a delight to meet priests from other dioceses, in a sense it was liberating, as we weren't talking about "the diocese" but the priesthood.

If you are priest check out the site and if you agree with the objectives, join. If you are a layperson consider supporting the Confraternity by praying for it and its members, and if you can afford it, making a donation.
at March 29, 2011

I am glad that you are now set up as a Confraternity. I will pray for the success of the BCCC and all concerned.

Philip,
You both seriously misunderstand and misread Lumen Gentium.

Why not try reading it again in the hermeneutic of continuity!

I am totally puzzled by what Philip said. This is not my understanding of Lumen Gentium.

On a more positive note, I think the "Confraternity of Catholic Clergy" is probably better than a ministry to priests programme!