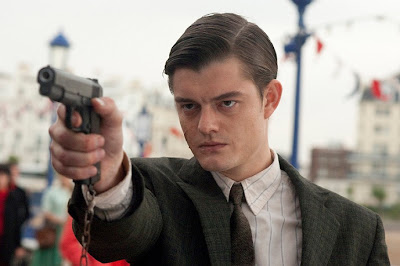 I am feeling guilty about not mentioning the new film Brighton Rock; directed by Rowan Joffe, starring Sam Riley etc. I haven't seen it yet but most of the action of the book takes place in my parish, so I am feeling a bit guilty. Fr Alexander Lucie-Smith wrote this review for Oremus, Westminster Cathedral's excellent magazine, (why is it so much excellence surrounds the Cathedral?) and said I might use it, to advertise Oremus.
Someone who had seen the film asked me if Brighton had change: I suspect not much.

Graham Greene’s Brighton Rock, which first appeared in 1938, remains the archetypal Catholic novel. Any discussion of the genre will always have some reference to the work. Ten years later, the book was made into a film, now available on DVD, which is still worth watching, and is usually described as a masterpiece of British cinema. Directed by John Boulting, the script was by Terence Rattigan and Graham Greene, with the part of the gangster Pinkie taken by Richard Attenborough. Thus, in filming Brighton Rock today, Rowan Joffe is working in the shadow not only of a great novel, but also of a great film. This represents a double challenge, and most critics seem to think he has not quite risen to it. However, one begs to disagree: Joffe’s version is a stunning evocation of Greeneland, even if it does have some minor flaws.

The current film improves on the book by streamlining the plot. The bent and alcoholic lawyer Prewitt is excised, and the rather creaky plot device of Kolly Kibber and his cards is likewise removed. Thus we have a simpler and faster moving tale. Kite is murdered by Colleoni’s mob; Pinkie, aged seventeen, hitherto a “runner” in Kite’s gang, murders Hale in revenge. Ida Arnold, who is a friend of Hale’s, as well as being the manageress of the café where the girl Rose works, determines to bring Hale’s murderer to justice – and it is Rose, the waitress, who has the crucial evidence that can hang Pinkie. Rose finds herself in a tug of war between Pinkie and his nemesis Ida.

The plot represents a pretty standard sort of gangster thriller; and indeed one could object to the plot engine (of which the film makes relatively little, but which dominates the book) that Pinkie must marry Rose in order to stop her giving evidence against him. But the real interest, even though the gangster violence is conveyed with great and terrifying panache, is in the characterisation. Pinkie, ably played by Sam Riley, who looks rather like Leonardo di Caprio, is a chillingly unattractive lost soul, and he knows it. “Those atheists, they don’t know nothing,” he says, in a line lifted straight from the novel. And Riley’s performance is a convincing picture of damnation in action. Pinkie is not amoral, but rather immoral – someone who knows that his actions are wrong, but who is powerless to repent: a damned soul. Riley is mesmerising in the role.

As he sits with Rose (a wonderful performance by Andrea Riseborough) in a depressing café, he thoughtlessly pinches the skin on her hand. “You can go on doing that, if you like,” she says. Rose’s motivation is problematic, both in the novel and the earlier film, but here the broad hint is that she is a girl who wants to be mistreated, a masochist. This damaged young woman drifts naturally towards Pinkie, a stranger to love, certainly frigid, and quite possibly, if the photograph of him and Kite is anything to go by, a homosexual.

If this sounds unutterably bleak, well, it is, and it is meant to be. And this is precisely the point the film is trying to make: the atheists have got it wrong. Pinkie and Rose are what life is like. Ida Arnold, played by Helen Mirren, a blowsy good time girl, who is not averse to a bottle of champagne, as well as the usual port and lemon, shared with a “gentleman friend”, Ida, who stands for sex, and fun, and drink, and some sort of worldly justice, really has no idea about the true nature of the world. But Pinkie and Rose do know what life is about – it is a game that has the highest possible stakes. Rose may not be over bright, but she does know more of human existence than Ida ever will.

But how Catholic a film is this? In the end, horrible as Pinkie is, there is a certain tragic splendour to him and Rose which Ida and her sidekick Corkery (played by John Hurt) totally lack. This movie belongs to the young people. Atheists will hate this film; they will try and explain the diabolical Pinkie away as some sort of social misfit, and Rose as a product of domestic abuse and the slums; well, they are all that. But there is an added and transformative element to them: Pinkie is more than just bad, he is evil – a concept that atheism cannot really handle, any more than it can explain saintliness. In the end, Pinkie, as much as any saint, though for a diametrically opposed reason, compels you to belief in God. “Those atheists, they don’t know nothing” – and this superb film proves it.

Interested to read this as I have not yet made up my mind whether to see the film or not.

I am not generally in favour of remakes - if a film is good why make another? - and having seen the original film I would be tempted to compare. However having read that much of it was filmed in Eastbourne where I grew up (Eastbourne not having changed that much since the 60s!) I may decide to go and see it. I remember seeing the fights on Brighton beach between the Mods and Rockers luckily safely from the top of a bus so the setting of the film during this time will be fascinating.

Sounds really good. Hope it's not too violent. I read the book years ago but honestly can't remember registering a religious dimension. Would like to hear another review.

Very well explained Father.There are of course two types of Atheist,the affectatious and the ignorant,the first of these wouldn't get it at all and the other would use it as a weapon against those of Faith.

Grahame Greene went through life with a serious Guilt Complex.

I truly suspect Greene wasn't a Catholic at all. He simply used Catholicism (a misproportioned, quasi-Jansenistic Catholicism) as an ideological frame of reference - a peg to hang his plots on, and a contrarian, aesthetically gratifying alternative to prevalent Marxism. I get this impression, more or less, about more than a few of the celebrated 20th century converts.

Waugh was by far a superior artist and (in the opinion of equivocal apostate Anthony Burgess) a better Catholic. I'm looking forward to the movie, but I'll continue to prefer my 20th century Catholic novelists with a French accent (Mauriac, Bernanos).

...the ones that aren't Flannery O'Connor or Flann O'Brien, that is.