Pope: When was the Last Supper? 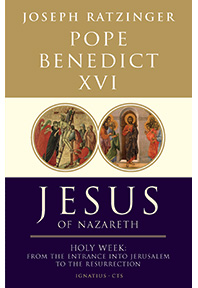 I haven't read Jesus of Nazareth Part II but the great Fr Z has and so has Amy Welbourn, Amy gives quite a few quotes especially dealing with the day on which Jesus celebrated the Last Supper, which of course affects our understanding of the Mass.
The Synoptic Gospels present the Last Supper as the celebration of the old Passover on the 14th of Nissan, John on the other hand has Jesus being crucified, whilst they lambs were being slain in the Temple in preparation for Passover. According to the quotes Amy presents the Pope comes down in favour of John's chronology which underlines that the Mass is, putting it crudely, more re-presentation of the Paschal Sacrifice than meal.
Yes, I know we know that, but for many the sacrificial nature of the Mass is obscured and the Meal dominates.

One thing emerges clearly from the entire tradition: essentially, this farewell meal was not the old Passover,
but the new one, which Jesus accomplished in this context. Even though the meal that Jesus shared with the
Twelve was not a Passover meal according to the ritual prescriptions of Judaism, nevertheless, in retrospect, the inner connection of the whole event with Jesus’ death and Resurrection stood out clearly. It was Jesus’ Passover. And in this sense he both did and did not celebrate the Passover: the old rituals could not be carried out—when their time came, Jesus had already died. But he had given himself, and thus he had truly celebrated the Passover with them. The old was not abolished; it was simply brought to its full meaning.
The earliest evidence for this unified view of the new and the old, providing a new explanation of the Passover character of Jesus’ meal in terms of his death and Resurrection, is found in Saint Paul’s First Letter to the Corinthians: “Cleanse out the old leaven that you may be new dough, as you really are unleavened. For Christ, our Paschal Lamb, has been sacrificed” (5:7; cf. Meier, A Marginal Jew I, pp. 429–30). As in Mark 14:1, so here the first day of Unleavened Bread and the Passover follow in rapid succession, but the older ritual understanding is transformed into a Christological and existential interpretation. Unleavened bread must now refer to Christians themselves, who are freed from sin by the addition of yeast. But the sacrificial lamb is Christ. Here Paul is in complete harmony with John’s presentation of events. For him the death and Resurrection of Christ have become the Passover that endures.

On this basis one can understand how it was that very early on, Jesus’ Last Supper—which includes not only a prophecy, but a real anticipation of the Cross and Resurrection in the eucharistic gifts—was regarded as a Passover: as his Passover. And so it was.

The description of the Last Supper sounds as if it was a Passover meal, with the fourth cup and hidden piece of bread possibly becoming the consecrated bread and cup. But if next day was preparation day for the Passover, it cannot have been.

The Holy Father's reflections stand regardless but I wonder, probably totally irrelevantly...
I once read a long thorough mindboggling explanation of the cronology of kings et al: utterly persuasive, it was all about the same hebrew words describing different dating systems of conquering or hegemonic powers followed at court , plus oddities of regnal years, the two kingdoms or parts of them even getting out of sych on months, on account of the moon being behind local cloud, changing ways of counting regnal years: really no worse than later ages might find something uninspired from our centuries which mixed julian and gregorian dates, an islamic date, WWII as variously 1914-45 (some soviet sources)36-45, 42-45etc + say,the queen's official birthday.
I am no scholar and have no means of judging, but I believe there was also a more tentative speculation as to Our Lord's own time:exile, persians,return, two loadser greeks, maccabees, then Romans, etc, plus all the high jinks with pharisees, saducees, herodians etc., having the tailend of such considerations allowing of the apostles not initially finding a seemingly paschal celebration ahead of the mainstream not a priori totally inexplicable.
Does anyone know if this has a pausible basis , is possible but unprovable or is pure baseless hogwash?

I seem to remember reading that Galileans were permitted to celebrate Passover one day earlier than usual.
One of the saddest changes in the Mass is the diminshed recognition of Christ's sacrifice on Calvary in favour of an emphasis of a meal / celebration.
I find it difficult, though not impossible , to contemplate Christ's elevation on the cross during Mass , but I worry that most of the congrgation have not been taught that.

Jesus of Nazareth Part II. I don't quite follow the new reasoning on His blood being on following generations. Not read the book yet. Think its better to accept that this WAS an anti-semitic remark because John was not getting the message through as well as he had hoped?

Leah,
It seems strange to have anti-semitism coming from a Semite.

Fr Z quotes a 2007 sermon by the Holy Father re essenes etc following their own timetables, worth reading, the Holy father as quoted by Fr Z saying un demonstated that Our Lord shared off mainstream timetabling necessarily, concluding that at least worth appreciating the complications of Jewish(in the broad sense) thought and observance of our Lord's mileau.

All fascinating. I suppose in this life it ll always be thru a glass darkly, and those of us with axes to grind will be obvious cherrypickers.

Fr: some brotherpriest of yours' sermon from way back when: not just "jews" as the establishment in Jerusalem, as opposed to outsiders,Galileans, the diasapora
etc, but also, tho in a far worthier cause,similar to the riots around Diana of the Esphesians, nonetheless the whole economy of jerusalem was temple/pilgrimage dependant , and hence, with a material interest in "siding" with the establishment.

Do you understand the 4th Cup?

After the supper He took the third cup saying, “Drink from it, all of you. This IS my blood of the NEW and everlasting covenant which is poured out for many for the forgiveness of sins."

A hymn was sung, which is a combination of several psalms called The Great Hillel, and they went out to the Mount of Olives.

What happened? The Passover ceremony and ritual was not complete. There was no fourth cup. There was no announcement that it was finished. Could it be that Jesus was so upset with what He knew was about to happen that He forgot? Doubtful!

Not only Jesus, but also the 11 others had participated in the Passover Seder every year of their lives. No, this was done on purpose. The last supper of Jesus was not over.

On the Mount of Olives, in the Garden of Gethsemane, the disciples slept while Jesus prayed, “Father, if you are willing, take this cup from me; yet not my will but yours be done."

He prayed that three times. Then Jesus was arrested, illegally put on trial by the Sanhedrin, then by Pontius Pilate, sentenced and crucified.

While on the cross He wept. Jesus, who was in excruciating agony, was so merciful that He prayed for the forgiveness of His executioners. He was offered some wine with a pain killer, myrrh, in it. He refused it.

"Later, knowing that all was now complete, and so that the Scripture would be fulfilled and the kingdom established, Jesus said, 'I am thirsty.'" A man dipped a sponge into sour wine; he placed it on a hyssop branch and lifted it up to Jesus lips.

He drank. (We recall that it was the hyssop branch which was used to paint lambs blood around the Hebrew's door for the Passover of the angel of death.)

It was then that Jesus said, "It is finished." He then bowed His head and gave up the spirit to His Father.

The fourth cup now represented the lamb’s blood of the first Passover, a saving signal to the angel of death.

The Lamb of God was now sacrificed. The last Passover supper of Jesus Christ was now complete with the fourth cup. It was finished.

The tie in with the Passover is unmistakable.

The Lamb of God was sacrifice and death was about to be passed over come Easter day.

The promise of eternal life for many was about to be fulfilled.

Christ’s Passover was finished, but His mission was not until he rose from the dead.

For more information on Jesus New Covenant and how everything ties together -- Passover Meal -> Manna -> Prophecy of the New Covenant -> Bread of Life Meaning -- go to The 4th Cup.com and watch the video! You can also read along while the video is playing.

Michael,
Yes,
but only If the "Last Supper" is the old Passover.

I think today, modern scholars following the Johanine chronology would, as I think Pope does, regard it as being something different, "The Passover of the Lord".

The Problem with your arguement is it based on Seders which are at the earliest from 8th Cent. AD! 800 years after Christ!

We really do not know what happened at Passover in the early first century, apart from biblical accounts.

Why not read the Pope's book?