Some thoughts on Christ, inspired by St Joseph 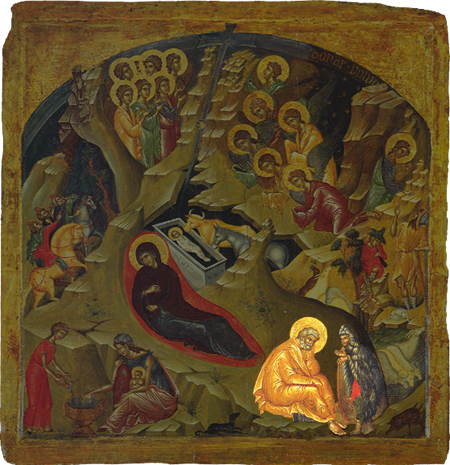 From the beginning a "correct" Christology is essential to being a Christian, this was the neurosis of the early Councils. The relationship of Father and Son was the preoccupation of the great Fathers of the Church, so too the idea of the Second Person of the the Blessed Trinity being Truly God and Truly Man without Co-Mixture, and being a Man like us, without sin. He is not a half-God, nor is he a super-Man he is a God-Man mixture, a cocktail, a blend, his Dinity and Humanity are distinct.

One gets the impression that Protestantism tends to see the Ascension as a shedding of humanity, especially filial affection, filial obedience no longer apply to Christ. Protestantism has a fear of the Flesh in both Mary and the Eucharist, and the Church too. This seems not to be what Catholicism and Orthodoxy are saying. Mariology, and by extension "Josephology?" maintain the humanity of Christ even after the Ascension, it is Jesus, the God and Man that he sits at the right hand of the Father. The Eternal Word has taken on humanity. It is indeed the "Spirit that gives Life, the flesh has nothing to offer." Jn 6.63, as Protestants would say of the Eucharist, and also the relation between Christ and his Mother but here, in Jn 6, Jesus is speaking of flesh that is alive, Spirit filled and transformed. It is after all God made Flesh who saves!

It seems to be a reaction to the Christology of the Protestant Reformation that produces a development in understanding of St Joseph, until then he is portrayed with his back to the nativity scene, an old man lost in contemplation, or even tempted by the "old man" from the Apocryphal Gospels.

St Joseph sees the fulfillment of the ancient promises. The hopes of Abraham and Israel are cradled in Joseph's arms, sleep in a bed he has made, sit down at table with him, need his protection and is obedient to Joseph and Mary. He is bound by that most human of all things emotional affection for his Mother and Foster Father and codified in the 4th Commandment.

An unmoving, unchanging passive love, a love that embraces heaven and earth would seem to come from his Divinity but an emotional, passionate affection, that weeps at the death of friends and over Jerusalem, a fiery anger that blazes with rage at the misuse of the Temple, a desire to gather chicks as a mother hen all belong to his humanity. It is this that is importantly safeguarded by a "correct" filial, even familial, devotion to Our Lady and St Joseph.

In the Office of Readings today St Bernadine says:


Obviously, Christ does not now deny to Joseph that intimacy, reverence and very high honour which he gave him on earth, as a son to his father. Rather we must say that in heaven Christ completes and perfects all that he gave at Nazareth.

His assumption is that the Lord is the same in Heaven as he was in Nazareth, though he "completes and perfects", his humanity and his affections are unchanging.
at March 19, 2011

Father Raymond! Thanks for that - after wading through some rivers of babble with the Vassula after your previous post, I found this so refreshing and renewing. Her take on the Word Made Flesh seems quite murky to me - again apologies to all those who love her messages. So I found your post very cleansing!
And I'm very fond of St Joseph. I've always felt his role in the Nativity story was often sidelined; the strength of his faith and his very necessary physical endurance and devotion often diminished or misconstrued.