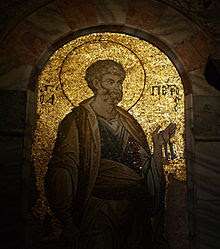 “Everyone who listens to these words of mine and acts on them
will be like a wise man who built his house on rock.
The rain fell, the floods came,
and the winds blew and buffeted the house.
But it did not collapse; it had been set solidly on rock.

And everyone who listens to these words of mine
but does not act on them
will be like a fool who built his house on sand.
The rain fell, the floods came,
and the winds blew and buffeted the house.
And it collapsed and was completely ruined.”

For the Jews of Jesus' day I suspect a "wise man who built ... on rock" would immediately summon up images of the wisest man of all Solomon, who built his house (for the Lord) on the Rock, of Mount Zion. For St Matthew's Gospel's hearers there was an even wiser man, Jesus who built his house, the Church, on Simon who he renames Rock, in Greek "Cephas", in Latin "Petrus".
Though the Temple fell, the Church built on Peter will endure until the end of time.

I must say I am more excited about getting a new translation of the Lectionary than the Missal, the above is from the US translation. In this country the "wise man" is merely "sensible".
at March 06, 2011

The New American Bible presumably? I have one; it is full of heretical footnotes. That the American bishops approved it is a disgrace.

"He looked around at them with anger: He was grieved at their hardness of heart..." Mark 3:5 (NRSV)

The Rock is insecure for those unprepared to change under the guidance of the Holy Spirit.

THEY are the dissenters and, thank the Lord, they are few.

I have an American missal. The lectionary (NAB) is appalling eg John the Baptist becomes "John the Baptizer". Presumably the translators thought that readers might think he was from south of the Mason-Dixon Line if the former description were used.

The Jerusalem Bible is full of banalities too. Philippians 4:4 has "I want you to be happy, always happy in the Lord; I repeat, what I want is your happiness." Compare that with "Rejoice in the Lord always; again, I say, rejoice."