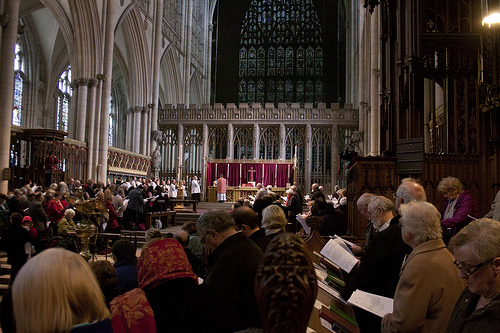 Someone from the Latin Mass Society emailed me asking that I do a post on the recent LMS Pilgrimage to York, I have to confess I wasn't very keen on it. I don't like the idea of celebrating Mass in non-Catholic churches; pray, say Vespers but not Mass, especially as in the case of York where there is a very adequate Catholic church, St Wilfrid's, right opposite the Minster.

However, I am told that there were difficulties with the use of the Catholic church, whereas the Minster was overwhelming in the enthusiasm of both clergy and lay staff, a readiness to assist in every way possible, from the offer of additional singers, to help with getting out additional seating, apparently 700 people came, twice as many as were expected, lots of families with small children. The Minister had even helped publicise the Mass. The Dean and Precentor even made time to attend, very kind of them.

All quite remarkable, 700 people that is quite some coetibus! Local Catholics apparently complained that there was little enthusiasm by local clergy, maybe the sheer weight of the numbers might change their opinion.

Well, of course, Yorkminster is a Catholic church, but rather in the way the Hagia Sophia is: in partibus infidelium. That said, saying the Mass in such a place without a bit of housecleaning first strikes me likewise as rather odd.

Father you seem to forget, that York Minster was built by the Roman Catholics in Britain decades before the reformation. Like Canterbury and Salisbury Cathedrals.

My brother had his "President's Mass" in Wakefield's Chantry Chapel a couple of years ago. This chapel originated in the 13th century and is owned by Wakefield Cathedral which is, of course, Anglican. They were delighted that my brother wanted Mass there and handed the key over without any problem. They also said that if he wanted to use it again they would be delighted. They themselves hardly ever use it and I think that it is something of a drain on their finances. By the way, this chapel is one of only three in England which is sited on a bridge.

Sounds like a good deal. We get to use the Minster for the purpose for which it was built, but avoid having to pay for the upkeep.

There is a quite lot of this in Sweden as the Catholic churches are too small and congregations can be too big so we get to use nice places like Vadstena Abbey church.

St Wilfrid's was our first port of call, but it was unavailable.

As things turned out it would also have been too small.

My own view is that there has to be a very good reason to have the Holy Sacrifice anywhere other than in a consecrated Catholic church. Pastoral need might be one. This event looks like another.

What a terrible lost opportunity! This could have been High Mass.

In reply to Fr William Young, there were good reasons why we were unable to have a solemn Mass this year. However it will, deus vult, be a solemn Mass next year.

Joseph Shaw is correct in saying that the church of St Wilfrid, just across the road from the Minster, was "unavailable"; and that, as things turned out,it would have been too small.

In my view, the difficulties with usung the Minster are practical rather than ethical. A non-catholic place of worhhip can be used with the permission of the local bishop. However, not being able to reserve the blessed sacrament does make for difficulties.

Et Expecto, this Mass was a once-off celebration. Why should there be any need to reserve the Blessed Sacrament? I presume that if any Hosts were left after Holy Communion the celebrant and, if necessary, others consumed them.

No 85 of the General Instruction of the Roman Missal, as published by the bishops of England and Wales, says, ‘It is most desirable that the faithful, just as the priest himself is bound to do,
receive the Lord’s Body from hosts consecrated at the same Mass and that, in the instances when it is permitted, they partake of the chalice (cf. no. 283), so that even by means of the signs Communion will stand out more clearly as a participation in the sacrifice actually being celebrated’.

I know that the Mass in York Minster was in the EF and the GIRM applies to the OF. However, one of the anomalies I remember from growing up in Dublin with the old Mass, if I may call it that, was that on Sundays, while one priest was celebrating Mass the others would give out Holy Communion sometimes almost from the beginning, pausing only for the Consecration. This was, in effect, a Communion service with Mass as a background.

Many who comment on blogs write about what they consider abuses at celebrations of the OF. I consider the practice of ‘tabernacle Communions’, whether in the OF or the EF, as close to being a serious abuse since it undermines participation in the Sacrifice of the Mass. I have been a parish priest of two large parishes here in the Philippines and didn’t find it too difficult to ensure that the vast majority at Sunday Mass received Holy Communion from what had been consecrated at the particular Mass. Weekdays, with much smaller congregations, cause no difficulty whatever.

The Blessed Sacrament should be reserved for two reasons only: for Communion for the sick and for adoration. We pray at each Mass ‘Give us this day our daily bread’. We should not be ‘stocking up’ in the tabernacle.

I am unhappy with the proliferation of Communion services on weekdays in many places – not here in the Philippines – as I think they undermine our understanding of the centrality of the Holy Sacrifice of the Mass. I also think that they are unnecessary. Huge numbers of Catholics throughout the world don’t have access even to Sunday Mass. I see very little difference between a lay person leading a Communion service and a priest who, after he has received from what has been consecrated at that Mass - otherwise there is no Mass at all - goes to the tabernacle to give Holy Communion to the people.

I hope I’m not dragging the discussion in a different direction. But it is about the Holy Mass, which is most sacred to everyone who has commented here and to everyone who took part in the Mass in York Minster.

JARay,
You may be interested to know that there was a Missa Cantata (EF) to commemorate the Battle of Wakefield on 30 December 2011, with singers from St. Austin's and Leeds schola greg. The chapel was packed.

The point is that, the organisers did not know how many people to expect.

If 1000 hosts had been consecrated, and only 100 people had presented themselves for Communion, what would we have done? There would have been far too many for the priests to consume.

Remember, we had no idea what proportion of the congregation were even Catholics. Also the Mass was at 1.30 in the afternoon and we could not know how many people had kept the eucharistic fast.

So not being able to reserve the Blessed Sacrament is a real difficulty.

Incidentally, the practice you describe of communion being distributed all through Mass is not one that I recognise. I am fairly confident thay it never happened in England. Certainly, I have never heard of it before.

Thank you "lms" for that posting. I did not know that this Mass had occurred. I can imagine that the chapel would be packed if you had those two choirs there and their families.

Thanks, Et Expecto, for your clarification. I recognise that there are certain occasions such as this one that cause practical difficulties.

I'm not sure how widespread the practice I described in my parish in Dublin was. We had five priests, not untypical of Dublin parishes at the time. Holy Communion was given at the 7, 8, 9 and 10 Masses, but not at 11 and 11.30. People fasted from midnight in those days. The 10 Mass was for children, though not a 'Children's Mass' as usually understood now. My parents never encouraged us to go to that Mass.

When I was young I usually went with my father to an earlier Mass while my mother took care of my baby brother and went to a different Mass. However, as we were growing up it was my father who took both of us with him while my mother went to a different Mass.
My Dad used to drag me to High Mass on such days as Easter Monday and Whit Monday in the churches of the Dominicans, Capuchins or Franciscans. I didn't appreciate it at the time but I'm grateful for it now.

In 2011 I attended a weekday Anglican Eucharist in one of the chapels of York Minster. The priest stayed in a genuflecting position after the Consecration. (I don't know if Anglicans use that term). In Korea the following year I saw a Catholic priest from the Philippines do something similar at a Sunday Mass for Filipinos. However, it struck me as somewhat eccentric, though not irreverent, and an expression of his personal piety rather than a proper liturgical gesture.

Again, thank you for your clarification.