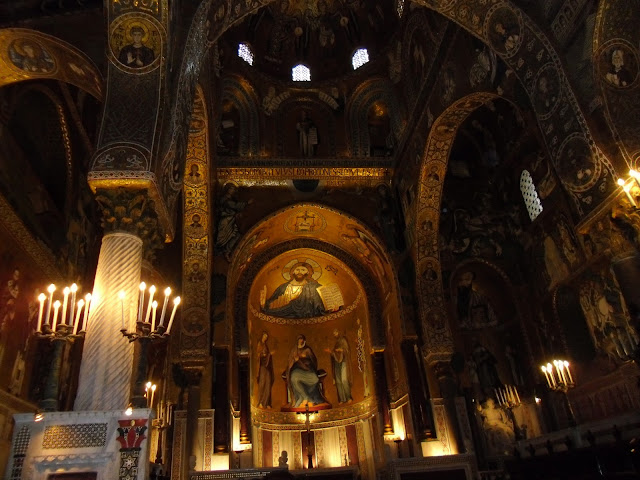 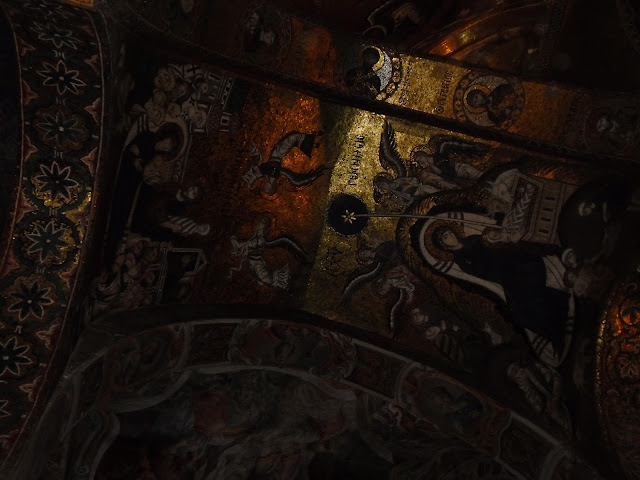 I have been back a couple of days, but I have been busy. The weather was awful, rain and even hail but just look at the interiors of some of the churches, there is the wonderful chapel in the Norman Capella Palatina encrusted with twelf century mosaics from just outside you can take a 40 minute bus ride up into the hills to the fabulous Monreale  Cathedral, it really is glorious.
I tried to imagine the effect of saying Mass under the wonderful apse with the massive Pantocrater looking down on the offering. It was a Church designed to inspire awe and wonder.
In the city there was another rather beautiful Church which I didn't know about La Martorana, again with 12th Century mosaics. There I found a rather lovely Nativity and Dormition juxtaposed on the vault of an arch, fascinating visual theology. 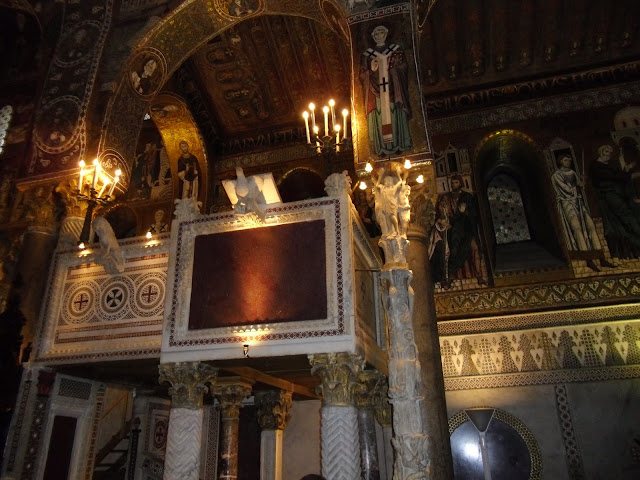 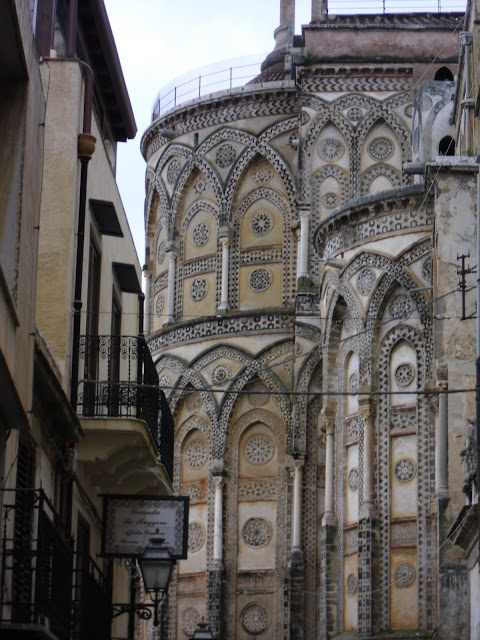 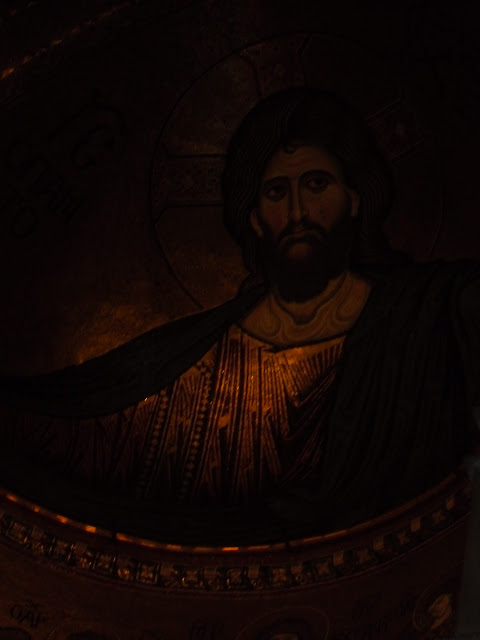 And there was amusing Baroque too, here is Jonah and the whale from S. Catarina. 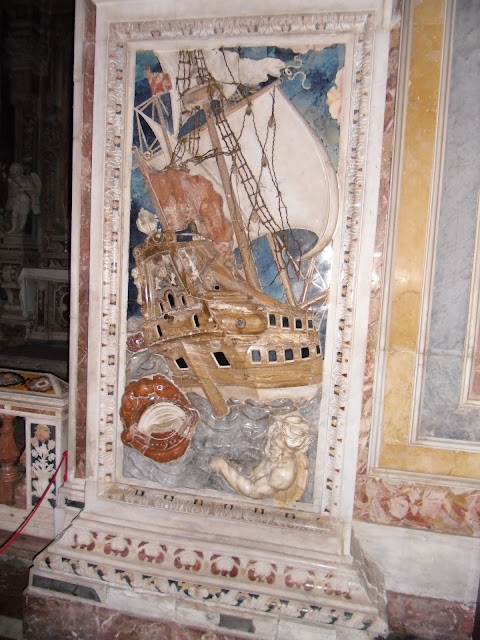 So glad they didn't hang you out to dry, as in your last post.

Exquisite - thank you Fr. Ray! Should I be surprised to see classic Byzantine iconography complete with Greek text in a 12th-C. Western Christian context? (I am... never having visited Sicily).

What a fitting setting for the miracle that takes place there at every Mass. I'd like to imagine that the music might be as beautiful as the temple, but I suppose that's stretching credulity to the snapping point.

Designed to inspire awe and wonder indeed. Thank you Father for sharing your pictures with us. I like your description of 'Visual Theology'.When I compare it to the new sterile concrete box church I visited in February it is enough to make one weep. Where is the visual theology in plain white walls? Where is the awe and wonder in a disjointed collection of splodges topped with a face, or a lop sided plain cross?

Awe and Wonder here as well. Thanks for posting those Father Ray.
I agree with Pelerin - "modern" churches, in structure, leave me cold. I know the intent and devotion of the congregation creates the warmth and the sense of belonging; but I still believe the church can be a celebration of beauty and palpable adoration. Call me old fashioned.

Is this Palermo Cathedral?

Mike,
No, the interior of the cathedral is dull and obscure.

Father Ray. Do you know much about
the books of Fr. Gerald O'Mahony SJ?
Someone claimed he said there was no hell and was told it was a scandalous thing for a priest to say. I have always admired and respected Jesuit intellect.
You speak of a "visual theology" and a visceral one but the ancient burning fires picture does not seem helpful. Any thoughts?

Mike,
Not sure where this fits in but...

I have always understood Hell as a doctrine connected to freewill. God wants us to be saved but we can choose otherwise.

I haven't read Fr. Gerald O'Mahony SJ but his views seem at variance with the Lord's. He definitely believed in Hell, though it seems to be Pharisees rather than publicans and sinners he threatens with it.

Thanks. Sorry if it didn't seem to "fit in" but I was thinking of the imagery in churches, "visual theology" and picture symbolism.

Making Hell our choice, as you put it, is a comforting thought. (I have a horror of Peter Brueghel)
So best wishes and Good Night. I can sleep better now!

He definitely believed in Hell, though it seems to be Pharisees rather than publicans and sinners he threatens with it.

Weel, the publicans and sinners must have already known that they were in trouble, but the Pharisees evidently had no idea they were headed in the wrong direction. Maybe that explains His particular attention to them.

I sought, I found. Here's a link to the surprising history of La Martorana, which explains the presence of Byzantine iconography.

Thank you for posting that link John! I knew next to nothing about The Martorana, even though I've collected little crosses and "eastern Christian" icons over the years. I know some people find the stylism and opulence of the Orthodox churches a bit hedonistic but I find it beautiful. And far more inspiring than a modern minimalist approach to worship...