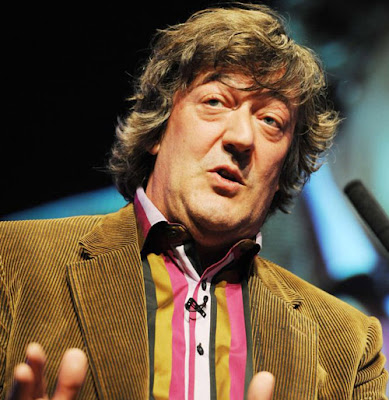 Sir David Wang has set up a new website in which celebs can correct slurs, errors, misreportings.
On the day of its launch Stephen Fry, the celebrity comic actor, has paid the $1,000 to say he is not anti-Catholic.
This the slur...
I’m an “anti catholic"


Stephen Fry with his haughty gravitas, sanctimonious self satisfaction etc etc etc has “taken it upon himself” to “make pronouncements” etc etc but his faux self deferential minor is a mask for disliking catholics.
from the Spectator

And this is Fry's reaction


This repulsive slur, that I dislike catholics, is deeply unfair and unkind. I am sure Mr Gray would be the first to baulk if someone who criticised the State of Israel was called anti-semitic. To suspect that I dislike Roman Catholics on the basis of anything I might have said about church practice and teaching is either inanely stupid or deliberately misleading. It gives the impression of being bad reasoning made in bad faith. Firstly: I was one of 50 asked, some weeks ago if I would lend my signature to a letter written to the Guardian, a wholly reasonable, temperate and permissible letter which questioned the sense of the state …

That is alright then, Fry loves the Pope and all Catholics, he just hates everything they do and believe in.
Mr Fry doesn't mention his participation in the debate in which he put forward the proposition: the Catholic Church is a force for evil in the world.
at March 10, 2011

Just a thought. I am no great fan of Stephen Fry, though he always seems amiable.

It does not follow from taking part in a debate as a speaker that one necessarily does so from a profound belief in the proposition supported. Student and university debates are an intellectual exercise. In the Schools of the Middle Ages, the Disputations were fundamental to education - they were required exercises in the process of moving towards the degree and status of Master. (We see a legacy of this in the tradition of the Devil's Advocate: it does not follow that the cleric required to fulfil the onerous duty believes in the wickedness of the candidate for sainthood. Indeed, it has always seemed to me important to faith to understand almost from the inside - an exercise of imagination - the compelling case for atheism: properly understood, this may bolster faith to move it beyond unexamined prejudice.

There is more to people than their words on one occasion, wrenched - perhaps - out of context. Even a priest, in a moment of frustration, may speak angrily against the church: but his true belief needs to be understood (not judged by us) on his life's work.

I would be cautious in assuming anti-Catholicism from the (slightly artificial) exercise of a debate, just as I would be hesitant to infer personal belief from the arguments used by an advocate in court to defend his client: there are questions of role. Are there wider examples in a personal capacity - articles attacking the Church, for example - which give evidence of consistent hatred of the Church?

Isn't Fry's semantic distinction something similar to the way a Catholic might say, "love the sinner, hate the sin?"

I think making this distinction is important for explaining why the Church's teaching against homosexual acts is not bigotry or hateful.

It cuts both ways, people who teach against the Catholic Church shouldn't be labelled anti-Catholic.

I guess that he means he doesn't hate the man in the pew. Just the Pope, Cardinals, Bishops and Priests...Oh, and those Polish Catholics, remember?

Father, it seems you might have missed a source of funds for your church restoration fund!

Well I'll continue to have nothing to do with Fry. It's not that I'm anti-Fry, I am simply anti Fry.

Someone is an anti-Catholic who recycles old myths and who doesn't research the veracity of or what he/she says or writes. Honest criticism and searching after knowledge should always be welcome.

I must disagree with Michael1. Who required Fry to appear at a debate and advocate an anti-Catholic position?

I am sorry for Fry's dispositions. I enjoyed him very much in Jeeves and Wooster.

It's funny how the BBC seems to indulge these characters. On the first episode of Radio 4's new comedy show So Wrong It's Right (still available on iPlayer) we had the charmless Rufus Hound suggesting a new soap, "Priestenders":

It's a soap opera set in the Vatican. Instead of Albert Square there's St Peter's Square. Instead of the Queen Vic there's the Sistine Chapel. And instead of low-level crime and an endless string of marital infidelity there's magic cannibalism meddling in the affairs of the State, and an officially-sanctioned policy of covering up child abuse... you've got to have a strong lead character, and it doesn't get much stronger than the Pope, aka Dirty Ben.

If you pay the licence fee, you're contributing towards the wages of men like Fry and Hound, to whom mockery of the Blessed Sacrament and the Holy Father is all part of their BBC-approved, BBC-broadcasted act. We whine that "they wouldn't do it to the Muslims" as we pour money into the perpetrators' coffers. Why should they take us seriously?

I'm not sure that the 'hate the sin, love the sinner' principle is applied by atheistic materialists such as Fry. In my experience, when one makes the distinction to atheists, one is mocked for hypocrisy. According to the secularist establishment, of which Fry could be said to be a member, there is a difference between being a Catholic and practising our religion. I would suggest Fry hates practising Catholics. The sort he likes are the soi-disant 'recovering Catholics'.

Was that a picture of Dorian Grey that you posted to accompany this article?

How nice to know he's a little rattled.

Just a note, the Intelligence Squared debate that Stephen Fry participated in was titled "The Catholic Church is a Force for Good in the World," and he argued opposing this statement... which isn't the same as arguing for the Church as a "force of Evil."

Interestingly enough, the piece Fry is responding to never directly states the slur that Fry attempts to correct, i.e., that Fry "dislikes Catholics".

Fry does not deny these central claims.

Gray's blog-post does however come close to stating what Fry's alleges of it when Gray writes - referring also to a previous blog-post - "Catholics shouldn't complain too much about being hated. It comes with the religious turf." This is sloppy, but not "bad reasoning made in bad faith"


On Fry's 'Correction' text.
Fry's 'Correction' tells us that during press interviews: "As patiently as I could I explained that I had no objection [to the papal visit], that all I was doing was signing a letter which recommended that he visit as all other religious leaders do."

Well, in fact, if you watch the BBC interview with Fry about the Papal visit, he certainly does have an objection to the Papal visit, and it's based on a very ill conceived notion of what constitutes a State; something apparently to do with size etc. Before insisting that the Vatican isn't anything like a real Sovereign State because, well, "it just isn't, it just plain isn't", he marshals the proof that the Vatican has no Olympic team... and then goes on to say that it's "a sort of rump accident of history". Unlike, I suppose... well, any other State in the world.

It's really worth a watch to see a textbook case of an otherwise intelligent man being rendered irrational by intellectual pride and passion.

It's funny how the BBC seems to indulge these characters.

True. Prior to the papal visit, BBC radio ushered in every malcontent they could find for interviews and without challange let them cough up every hoary anti-Catholic whopper in the book. When it turned out the visit was going to be a success, the BBC went total blackout on the story and instead gaves us stories about the dingy rooms that the athletes in the Commonwealth Games had to stay in and no one cared a whit.