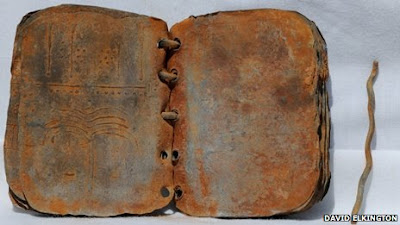 The BBC reported on some first century books, that were discovered in Jordan, they have early Christian symbols. The obvious question is: Do they pose a problem for the Church?
The answer is: No.
Christ promised to be with the Church until the end of time to guide her into all Truth, etc. etc.
First of all we have to judge whether they are "Christian", that is are they part of the Apostolic Tradition, as opposed to a Chritian sub-group of which there seem have been many, especially between the resurrection and the destruction of the Temple.
Do they alter Revelation? No, because the Tradition didn't count their contentents, whatever they maybe, as reflecting what had been passed on to the Church. We judge what they might say against what the first witnesses the Apostles taught, in the scriptures we have.

What they do indicate is that "Christian" writings are actually early, the letters of the Apostles all predate the destruction of the Temple.
at March 30, 2011

Ring binding in the first century? I would have thought scrolls were the norm in those days and for some times afterwards? News to me. Nice to learn someting new.

The Daily Mail covers this on their website today. Some commenters have suggested it may be an early April Fool. Apparently the pages are made of lead so they must weigh an incredible amount even though they are only credit-card size and it does seem an odd substance to use for books when papyrus was available and widely used. They were discovered five years ago so I do wonder why news of them did not surface then.

Intriguing but I do remain sceptical - remember the 'genuine' Hitler diaries and the amazing Jack the Ripper diary? Experts have be proved wrong in the past.

After the destruction of Jerusalem the inhabitants were scattered around the globe.

Christ,s followers would probably already have been settled in Rome.

I think these "books" would have been salvaged by the fleeing Jews,it seems they are written in Ancient Hebrew.

They also had codices in those days.

A codex is a set of pages bound as in a book.

Whence comes the idea that the NT writings you mention all pre-date the destruction of the Temple, Father?

Nickbris,
The suggested date for these books is from the time Christians fled to Syria and Transjordania after the martyrdom of James, which was quite a long time before the destruction of Jerusalem.

I thought the Christians fled when the Romans descended on Judaea to put down the Jewish Revolt.

I want to know some things:

1. What is the texxt and what recension does it resemble?

2. Are the sybols really Christian or similar Gnostic symbols?

3. Is there a plausible use hypothesis for this little book?

4. Has a cryptographer looked at it to see if the symbolss are a possible cipher or a memonic device?

5. Have chemical, physical and raddiological testseen done, with special attention given tothe degradition of Pb.

At the risk of sonding too much llike St. Thomas, I have nothing to say until more information is forthcoming from those who might know something.
Fr. Mike Forbes
Rochester, MN

These 'books' may be an archaeological treasure but, as you say Fr Ray, they can add nothing to revealed truth. There are many MS that were around at the time the canon of scripture was forming that didn't 'make it in', such as the Didache or the Gospel of Thomas, that were later lost and then rediscovered. Their being found had added immensely to our understanding of the early Church, & the milieu in which it operated, but changed nothing else.

I expect hours if not days of discovery and history channels documentaries, sundaysupplements, glossy magazines, weirdo websites, interviews with "experts" like Dan brown or utterly peculiar american protestants....
The problem is not only that all-99% these people know no christianity, it's that they know nothing about anything.
I dont know what I do wrong- Im increasing in ignorance daily and still don't get that sort of cushy job.