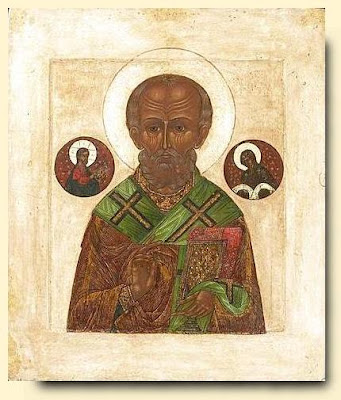 Yesterday a new member joined the household, or rather returned to the household. I say returned in so far as he was the pre-reformation patron of Brighton.
The icon is 19th Century, the garments are very beautiful painted with shell gold, I suppose originally he would have had a gilt or silver riza. The beauty of his hands, the tenderness of his eyes attracted me to this icon.
The roundels are a reference to St Nicholas' appeareance at the Council of Nicea when legend related he physically assaulted the heresiarch Arius and was "defrocked" and imprisoned for his zeal, during the night Christ appeared and gave him again the book of the Gospels and Our Lady restored to him the orphorion "the episcopal stole or pallium". His chasuble is actually red but overlaid by gold, and the red starred background of heaven behind the Saviour and the Virgin speak of suffering, the green, and also the extensive use of gold, of the funcundity of the saints miraculous ministry and of divine grace. The swirling of fabric over the saint's heart I suspect are meant to indicate his dedication to mystical contemplation, often it is the centre of his beard that swirls pointing to the same mystery, the tri-furrowed brow and cheeks I presume are supposed to indicate his continuous contemplation of the Holy Trinity.
He is the patron saint of Apothecaries, Boys, Brides, Children, Choristers, Court recorders, registrars, Dock workers, Murderers, Orphans, Paupers, Pawnbrokers, Prostitutes, Sailors, Women desirous of marrying, Brighton and practically every other thing besides.
The Russians have a saying, "If anything should happen to God, we will still have St Nicholas". Having given him a home I expect him to work for his place here, I expect a miracle or two on a regular basis or I am a fraid he is off to the sale room (well, maybe not yet, he is part of my pension plan).
at January 10, 2007

He sounds a fitting patron saint for Brighton!

So what has he done so far miracle-wise?