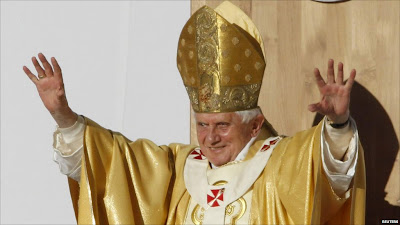 I think the images of today's Apostolic Visit were maybe more powerful than what was said, though the two addresses were significant especially the Holyrood speech. 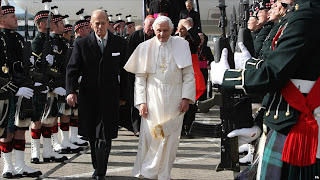 The day began on a very low key with the Pope being welcomed by the Duke of Edinburgh, Prince Philip, I was rather touched by that little snatch of conversation about the weather with Card Cormac. The swift drive through the Scottish capital again seemed low key. 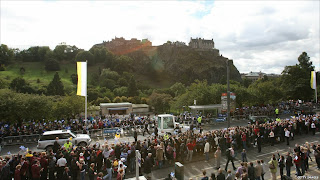 The meeting with Queen, the exchange of rather lavish gifts, the Pope giving a 9th Century Gospel, the Queen a folio of Holbein drawings marked a change of gear. The Queen shared her faith, although obviously her speech was written and approved by a government official was warm and gracious, the Pope's words were a Preface to his whole visit. I thought his occassional mispronunciations added to his charm.
The meeting in the marque with Scottish notables and ordinary people from various "faith" communities was delightfully informal, not much pomp.
The St Ninian's Day procession looked great fun, Cardinal O'Brien made it more of a carnival by draping a papal tartan scarf around the Pope, which he happily wore. There were pipes and drum, flags and cheers, one of the touching moments was the motorcade stopping and the Pope kissing a little child. 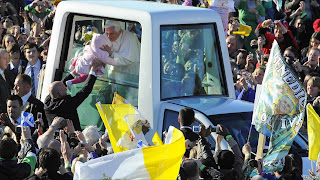 I was impressed by the fact the motorcade ended up not at some great hall but a modest Morningside villa for lunch of tatties and neeps with just a dozen or so guests but only after he had patted the heads of the local primary school children. Somehow it showed the modesty and humility of the Pope, yes and his grace filled joy too.
Though I thought the liturgy of the Mass was a bit contrived, it was full of joy and the Pope spoke gently and clearly, to bishops, to priests and especially to young people.
There were no signs of protesters, security was heavy but  still the Pope charmed everyone including Alex Salmond who grinned from ear to ear and reportedly saying that Scotland would not exist without the Catholic Church. 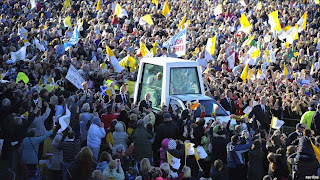 The pipers' escort was a great idea to drown out Ian Paisley.

Paisley says he got an email from the papal visit website saying you get out of purgatory faster if you go and pay the GBP20 for a ticket. Was there really an extra indulgence?

Frabjous day! Men cried with joy in the streets at the sight of such wondrous tradition. Vatican II is truly over.

The designer of the new St Ninian tartan has a blog

Sadie, Sadie,
That is just not mentioned here, otherwise we might not be left in peace.

A wonderful summary of the day by Fr. Blake. God bless Pope Benedict!

I heard the Salve Regina was sung at the airport by some of the crowd there! Great welcome, well done Scotland.

It's hard not to be happy when the Pope visits.

I know that subjects of Her Majesty may wear the Stuart Tartan.

It was a master stroke by Cardinal O'Brien to invite to the parade all schools in Scotland dedicated to St Ninian. A real ecumenical gesture.

With all these children wearing the the saltire it looked as if they had escaped from some noughts and crosses game!

With the Holy Father's request for Christians to be more outgoing in the public space, will the St Ninian's Day parade be repeated next year?

I was at Bellahouston Park and it was amazing! I have many photos with one fairly close of the Pope.

Wonderfull day and will be remembered for my whole life!