Pope on Solidarity with those in need 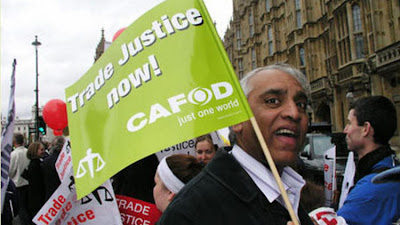 
'Since your visit to Rome, political changes in the United Kingdom have focused attention on the consequences of the financial crisis, which has caused so much hardship to countless individuals and families. The spectre of unemployment is casting its shadow over many people’s lives, and the long-term cost of the ill-advised investment practices of recent times is becoming all too evident. In these circumstances, there will be additional calls on the characteristic generosity of British Catholics, and I know that you will take a lead in calling for solidarity with those in need. The prophetic voice of Christians has an important role in highlighting the needs of the poor and disadvantaged, who can so easily be overlooked in the allocation of limited resources. In their teaching document Choosing the Common Good, the Bishops of England and Wales underlined the importance of the practice of virtue in public life.'


The kind of 'justice n' peace' work promoted by the Bishops of England and Wales is one that doesn't really promote the idea of the rich actually ever coming into contact with the poor, so that the chasm of understanding between Lazarus and Dives is perpetuated until the End of Time. There is a collection for CAFOD, the once Catholic charity who now, apparently, promote contraception and abortive procedures in total and utter contradiction to Church Teaching, but it is almost as if the Bishops really believe that the Gospel is somehow about fairtrade, rather than emphasising the Works of Mercy, which not only help to act as reparation for our own sins, but touch the lives and hearts of others in a profoundly human way. Somehow, I do not think that when Our Lord preached that at the Last Judgment, He would gather into His Kingdom those who fed the hungry, gave shelter to the homeless and visited the sick and imprisoned, that He imagined the souls of a large gathering of Benetton-clad youngsters holding hands and being photographed by the Diocesan rag to raise awareness about 'climate change' ascending up to God.

The Gospel calls us to hands on practical charity but is it "either or" or should it be "both and"?

Bones is quite right to ask,  "Has the Church's mission to the Poor been reduced to 'campaigning'?"
at September 21, 2010

Regrettable though it is to admit, we read and hear so much about CAFOD's complicity in the provision and promotion of condom use in its work in the Third World, particularly in its work in the field of Aids/HIV - a policy quite contrary to the teaching of the Church, that I'm sure that many, many Catholics no longer trust CAFOD and no longer support it. When you learn of the opinions,life-style and actions of certain lay people actively involved over the past decade and longer, in the top managerial and executive positions within Cafod, the alarm bells start ringing. An alternative charity - recommended by Fr Finegan and perhaps others, is 'Aid to the Church in Need', http://www.acnuk.org

Yes, we transferred our giving from CAFOD to ACN some years ago, for these reasons and others...

I don't fund CAFOD any more for the reasons given by umblepie above,also because of the high salaries paid out to the people at the top, for instance, the chief exec. (Chris Bain) £70.000+ benefits. Something about charities appealing for your money while their salaried staff are on such a whack leaves me cold- the more so as they badger us to 'live simply'.

If Catholic Social Teaching = CAFOD
what does Catholic Teaching on the Sanctity of Human Life = ??

I am with umblepie and Fr Tim Finegan, and as Our Parish is usually overrun with Mass requests, I do use ACN for Mass requests - Unless of course someone knows of any struggling Priests / Parishes closer to home that would benefit ?

Works of corporal mercy are no longer taught in most Catholic schools. People now treat recycling and fairtrade rather like Luther accused us of treating indulgences - drop off your phone, or buy the biscuits and earn climate change or social awareness brownie points to offset your carbon footprint. No intelligent person would be fooled by the "eradicate poverty campaign" which gives a rolling percentage as a poverty line. Works of corporal mercy do not deal in artificial targets - they put the onus on us to do what we can to tackle poverty and injustice at home , and we are lucky to have wonderful missionary nuns and priests (like the lovels missionary sisters I met on Saturday returning to Beckenham on the train, who can use our money to fight poverty further afield. The Church has always had the real answers if you look hard enough- because it was divinely instituted. Bones is spot on, and so are you.

There is plenty of misinformation about where the money goes which is donated to CAFOD.The LIARS & Deniers would love to see the money in their own pockets.

Cafod has done sterling work amongst the desperately POOR AND NEEDY all over planet and they are Catholic.

It is both-and. But campaigning must be rooted in the social teaching of the Catholic church, and sadly, Cafod's is socialist and not rooted in Catholic Social Teaching at all.

If it is misinformation to suggest CAFOD is not truly Catholic, some of it emanates from the CAFOD www site, where they (inter alia) reinterpret 'abstinence in a wholly non-Catholic way. See my post at http://ccfather.blogspot.com/2009/03/schizoid-cafod.html if you are nterested in facts rather than assertions.