Pontiff and the Sovereign 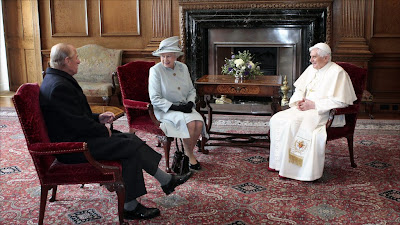 I watched the BBC's presentation on the net, it was unexpectedly up-beat and positve.

The Pope's words in response to Her Majesty's words of welcome seemed to be a preface to the whole visit, stressing not only the importance of the UK historically in the world but also its continued importance in the Anglophone world.

If you haven't heard or read the speech, here are two paragraphs I think are the most significant:


Even in our own lifetime, we can recall how Britain and her leaders stood against a Nazi tyranny that wished to eradicate God from society and denied our common humanity to many, especially the Jews, who were thought unfit to live. I also recall the regime’s attitude to Christian pastors and religious who spoke the truth in love, opposed the Nazis and paid for that opposition with their lives. As we reflect on the sobering lessons of the atheist extremism of the twentieth century, let us never forget how the exclusion of God, religion and virtue from public life leads ultimately to a truncated vision of man and of society and thus to a "reductive vision of the person and his destiny" (Caritas in Veritate, 29).


Looking abroad, the United Kingdom remains a key figure politically and economically on the international stage. Your Government and people are the shapers of ideas that still have an impact far beyond the British Isles. This places upon them a particular duty to act wisely for the common good. Similarly, because their opinions reach such a wide audience, the British media have a graver responsibility than most and a greater opportunity to promote the peace of nations, the integral development of peoples and the spread of authentic human rights. May all Britons continue to live by the values of honesty, respect and fair-mindedness that have won them the esteem and admiration of many.