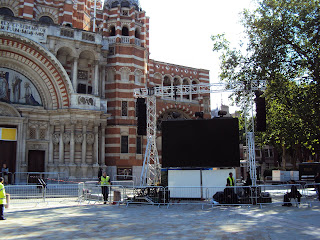 We, Bones, do read his post, and me, arrived in London Victoria  about 2.30 and decided to go the Abbey, first we went to Westminister Cathedral, which was closed for Saturday's Mass. There was a big screen outside, which was turned on while we were there. 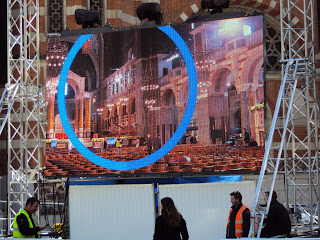 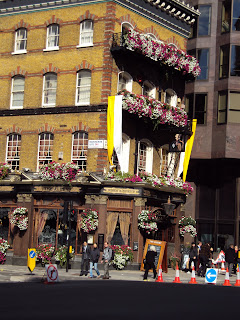 In Victoria Street the only sign of decoration for the visit were the banners outside the Albert Pub. 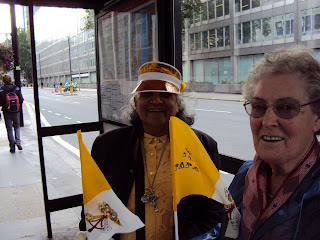 We met these lovely old lady's waiting for their bus.
There were already people waiting to get into Westminster Abbey and the crowd was gathering opposite. 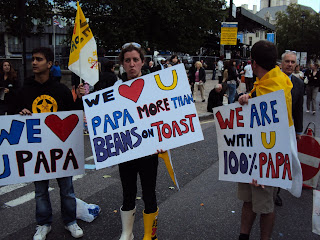 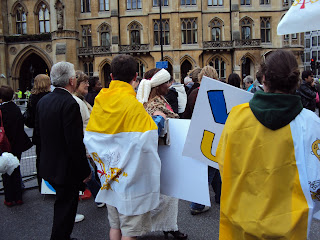 There were lots aned lots of young people there, some draped in the flag. 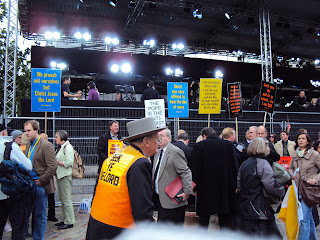 In front of the media balcony a number of Protestant Truth Society members had set up shop, I made up a point of praising the ones with scriptural placards, told them the Pope would be delighted to see them carrying placards with scripture quotes on them. Strangely it didn't seem to please them to much, especially coming from a Catholic priest. 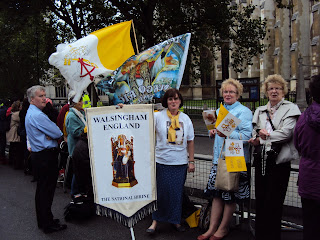 These ladies had arrived quite early 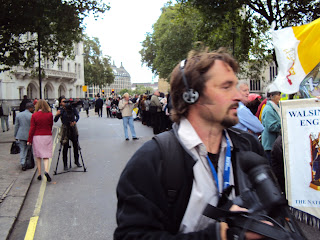 There were lots of men from the media 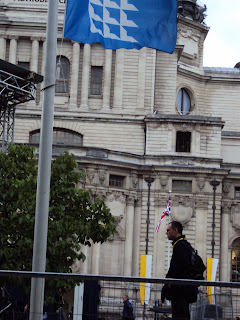 I was amused by the banner draping Methodist Central Hall 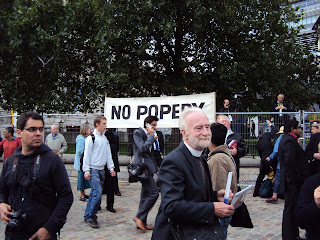 This nice old gent was handing out "No Popery" leaflets. He had been an Anglican but left after the ordination of women. We had a pleasant discussion on the evils of Liberalism. 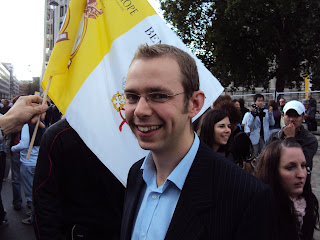 I met Chris Serpel who I hadn't seen for three or four years, he's a Catholic Voice 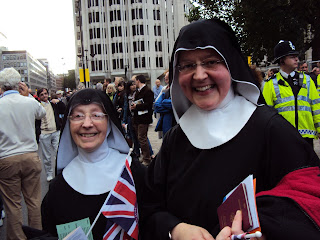 and the Prioress of Minster, I last met her when she was a novice.
I like these sweat shirts
worn by young men from Netherhall 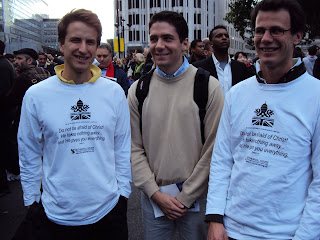 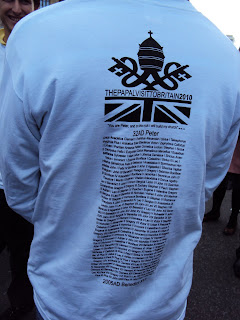 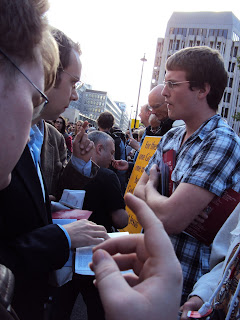 As I said earlier we were near some militant Protestants, here Chris Serpel, the Voice, gets out his own bible to discuss scripture with one of them, all quite good natured.
What surprised me was how little scripture they actually knew, they would quote an odd verse but not know its context. A young women I was talking to about confession didn't actually know The Lord had said to the Apostles, "Those whose sin you foregive are forgiven, those whose sin you retain ..." 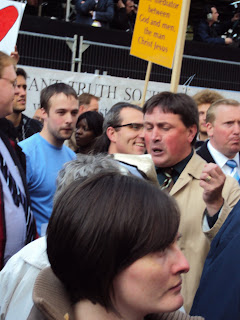 Here is man ranting scripture at us, I thought he was going to have fit, shouting out that text about the whore of Babylon. 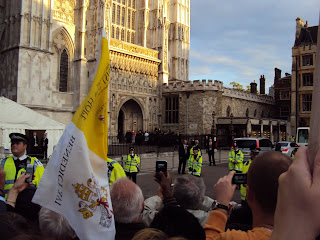 This actually is the only picture I got of the Popes arrival, by the hand with the pole is the Popemobile and I think the Pope is in the doorway of the abbey. Bones who was standing next to me has a video up. 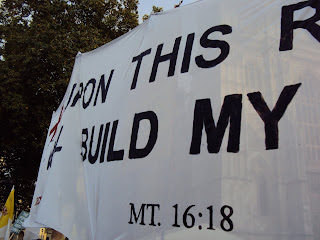 Some young Catholics had this huge banner and kept moving it in front of the "No Popery" banner.
Here are some Sister of St John, amongst them is Sr Mary, the sister of one of our younger diocesan priests, I met her later. 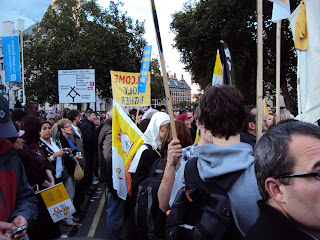 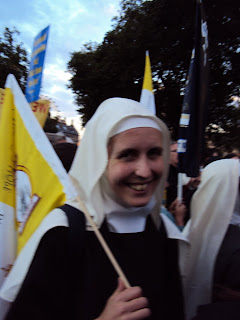 Here the Pope leaves in a closed car 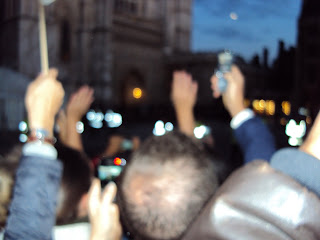 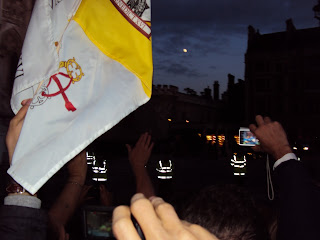 This was one of my successes, I persuaded a women to abandon her "Women priests" placard. 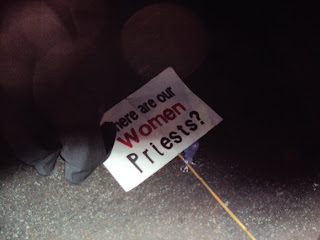 I had a wonderful day, the crowd was electric and I really enjoyed the debate with the Protestants, at least they weren't Liberals!
at September 18, 2010

Great pictures - and I spotted an old friend. He's in the Protestant Truth Society picture in jacket and tie. He's also the one ranting Scripture at you - he has regular similar fits on facebook too!

Years ago he and I believed pretty much the same thing. He went one direction, I went the other. Much to each other's dismay.

Anyway, thanks again for the pictures from those of us who can't be there. I look forward greatly to today and the mass from the Cathedral which was one of my favourite places long before becoming Catholic.

Great to bump into you and Lawrence yesterday, Father.

Love the photos, as these make the visit more accessible for those of us who cannot be there. Thanks.

Thank you for the pics and comments giving me a small insight "from the street" so to speak. May much fruit come from this encounter. St. Thomas Moore pray for us.

As one who could not be there but would have loved to have been, I thank you for this background. I truly am grateful. I did manage to tune in to the start of the Mass at Westminster but had to leave long before it really got underway because I was on my way out to Mass here in Western Australia. EWTN has served us very badly. I kept on looking on EWTN but got nothing at all about the Papal visit. Clearly EWTN thinks that Western Australia is not interested even in replays of what has gone on when you are 7 hours ahead of us. For us, the 10 am Mass at Westminster began at 5 pm and we clearly could have watched it all if we were not going out.

Thanks for the pictures and commentary Father - just great!

Sorry to come back to you but you must be wondering how I could watch part of the Mass at Westminster if EWTN was not showing it. I watched it on my computer on www.thepapalvisit.org.uk/webcast
I have just tuned in again and simply had to come back to you.
I watched Fr. Brown of the Westminster Archdiocese talking about himself. I know him! Yes! We were at Lisbon together. I recognised him immediately. He spoke about his conversion from Anglicanism and the fact that his eyesight was lost due to an hereditary disease. The English College prayed a Novena together for his Ordination and on the 8th day of the Novena, word came from the Vatican that he could be ordained even though he was blind.
He then went on to say that he spent 35 years at Westminster Cathedral where he heard confessions, counselled people, said Mass by the help of a tape recorder playing in his ear, etc..
What a joy to see him and hear him! After all these years too!
I never expected that!
John Rayner,
ex Lisbonian Seminarian (1957-1959)

On Lambeth bridge initially and then after the Pope passed us, off to the WAbbey where we sang the Salve Regina and the Pater :)

Hope the Pope saw it!

I read your SMM blog regularly, but I had never realised what a wonderfully feisty old b******d you were 'til today.
And yes, it is so true - most radical Prods are more fun than radical secularists. Cheers, and God Bless You.

some guy on the street said...

About that delivering a woman of her uhappy placard, may I inquire how did you do it?

Not too difficult, she wasn't that much attached to the placard, I made friends with her and just asked her to get rid of it.

I think with the PTS around she felt sorry for the Pope and didn't want to add to his grief. Besides young women around her gave it a stare of dislike.

Thanks for the man in the street eye view, Father. Glad you were able to turn out for the il papa.

What burns me up is that the lead story on aol headline reads: "Thousands turn out to protest pope." Pack of liars, and it's amazing how they get away with it.

Habits, Dominicans and Redemptorist but not many cassocks, I wore suit, except of course bishops!

"Upon this Rock..." banner blocking the Protestant posters was from St Thomas More, Swiss Cottage. A great bunch of young people! A picture also appeared in Saturday's Telegraph. Thanks for your photo.

I normally treat anons as spam - thanks for the info.

"I persuaded a women to abandon her "Women priests" placard."

Father, SNAP - when we were on the tube (my daughter (24), her step-sister(13) and I(60)) a fellow from Middlesborough diocese got on with a Tshirt saying "women priests now!" but the obviously disinterested looks he got from us must have made him change his mind because he took off the Tshirt:D