News from the Capital 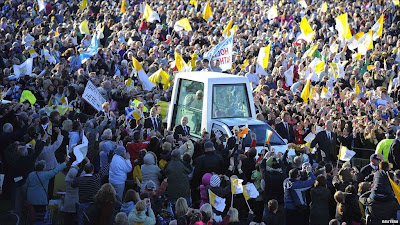 I am catching up on yesterday's papal events,
I only managed to catch bits of this mornings Mass which seemed to have been splendid.
A couple of people phoned me say that they have been looking for protesters in London and only saw a handful.
Apparently there is a bit of concern in the choir, today for the Vigil, apparently the music is being led by evangelical non-Catholic and there is a big evangelical choir which is being given prominence, ruffling a few feathers.
Others have sent me messages saying how tremendous the atmosphere is. Apparently "The Priests" have been going around photographing everything, they like everyone are excited.
at September 18, 2010

Why on earth would some people be concerned that the choir that's going to sing is led by a Christian evangelical or that such a choir is being "given prominence"? Sounds like nit-picking or even paranoia.

The best music so far was sung at Westminister Abbey which is not exactly high church C of E.

Mhairi,
I think possibly because he didn't seem to understand what Benediction was about, and how to pronounce the words of the Latin chant or how to sing it and he was expecting choir members to wave their arms about and perform, to pray in a charismatic way rather than as Catholics, he doesn't understand how we pray!
Also when things needed more practice he didn't bother.

There are 10,000 protestors; less than 1% of the population but still a lot more than a handful.

Ah no, Mhairi: yesterday I would have agreed with you, but today the Cathedral kicked the Abbey's ass, music wise.

Westminster Cathedral this morning was by far the best musically and I noticed how the Holy Father took the trouble to shake the hands of all the choristers on his way to the sacristy. I wonder if it has occurred to someone to poach them for the Sistine!

I am just back from the vigil - and I have to say the music at 4 o'clockish was definitely a bit gospel-tentish - however, it was good - by the standards of its genre, and the event, generally was a miracle of organisation. The Handel on the Pope's approach - English and German in equal measure, which was a nice touch - and, yes, Handel was Protestant associated with the Hanoverian Monarchy - but it went well with the sight of the Popemobile on the screens, storming up the Mall - lined with cheering spectators, and papal flags - almost an ironic comment or subversive touch to see the juxtaposition of such icons of Anglo-German Protestant with the triumphal progress of a German Pontiff. The Priests made good music choices too - they bridged the gap between the entertainment, the ceremonial, and the sacred, smoothly. The sound systems were excellent. As the Holy Father disembarked - the moment all church organists dread arrived - they ran out of music - and had to play the Halleluiah Chorus twice!!

Babs: Well I watched the prayer vigil and none of the things you mention about waving arms and poorly pronounced language happened. I'm not saying you Babs but too many rumours and downright lies have surrounded this visit. Some even on Catholic blogs. Oh and lots of Catholics pray with their arms in the air. Nothing wrong with that in the right place. Lifting hands to praise God is mentioned several times in the Bible so it's perfectly orthodox. Maybe I should try it as at my age kneeling is becoming a penance in itself. Well more accurately the getting up is the penance.

Berenike: I agree that the music at the cathedral was better than at the abbey but until then the abbey held the prize. I also liked the music at the prayer vigil and the music composed by James (can't remember his surname) for the Mass in Glasgow was also quite moving at times.