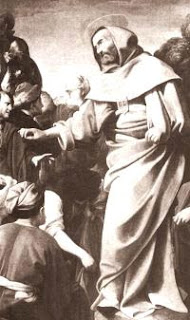 Though they closed his mouth with iron, still he spoke.

Born of noble but poor family, he showed early traits of piety and great talent. His father ordered him to tend a farm, but later gave him permission to take the habit with the Mercedarians at Barcelona, at the hands of the founder, St. Peter Nolasco.
Raymond made such progress in the religious life that he was soon considered worthy to succeed his master in the office of ransomer. He was sent to Algiers and liberated many captives. When money failed he gave himself as a hostage.
He was zealous in teaching the Christian religion and made many converts, which embittered the Mohammedan authorities. Raymond was subjected to all kinds of indignities and cruelty, was made to run the gauntlet, and was at last sentenced to impalement. The hope of a greater sum of money as ransom caused the governor to commute the sentence into imprisonment.
To prevent him from preaching for Christ, his lips were pierced with a red-hot iron and closed with a padlock.
After his arrival in Spain, in 1239, he was made a cardinal by Gregory IX. In the next year he was called to Rome by the pope, but came only as far as Cardona, about six miles from Barcelona, where he died.
His body was brought to the chapel of St. Nicholas near his old farm. In 1657 his name was placed in the Roman martyrology by Alexander VII. He is invoked by women in labour and by persons falsely accused.
at September 01, 2010

You say he was born of a noble but poor family.

I understand that Saint Raymond was named 'Nonnatus' as he was born after his mother's death presumably by Caesarian.

Hope you had a good Feast day Fr Ray. My diary said only that it was the Feast of St Aidan yesterday.

Pelerin, in the old church calendar St. Raymond was celebrated.

The collect didn't pull any punches:

"O God, who didst by Thy grace make blessed Raymund, Thy Confessor, work wonders in redeeming Thy faithful from bondage among the infidels: grant, we beseech Thee, by his intercession, that being losed from the bondage of our sins, we may be at liberty to do consistently what pleases Thee. (etc)"

One of the nice things about TLM is that they weren't "PC."