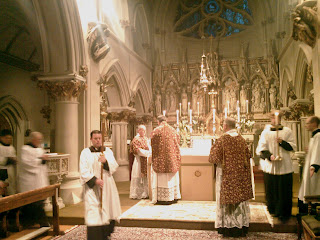 Paix Liturgique have conducted a survey of British Catholics, with some rather interesting results.

Question #2: In July Pope Benedict XVI restated that the Mass could be celebrated both in its modern, "ordinary," or "Paul VI" form--i.e. in English, with the priest facing the faithful, communion received standing--and in its traditional, "extraordinary," or "John XXIII" form--i.e. in Latin and Gregorian chant, with the priest turned towards the altar, communion received kneeling. Were you aware of this?
Yes: 39.4%
No: 60.6%

Question #3 : Would you consider it normal or abnormal for both liturgical forms to be celebrated regularly in YOUR parish?
Normal: 44.9%
Abnormal : 21%
No opinion: 34.1%

Question #4: If Mass were celebrated with Latin and Gregorian chant in its extraordinary form in YOUR parish, without taking the place of the ordinary one in English, would you attend it?
The following answers are from all Catholics polled:
- 15.6% would attend every week
- 10.8% once a month
- 11.1% for Holy Days
- 46.1% occasionally
- 16.4% never


III - PAIX LITURGIQUE’S COMMENTS
1/ The first lesson to draw from this survey, and good news for the entire Church too, is that 32% of British Catholics claim to attend Mass at least once a month. This reported rate of practice is far superior to that in old Catholic countries such as France or Portugal (both at 19% according to the December 2009 IFOP survey for La Croix and the May 2010 Harris Interactive poll for PL, respectively).
2/ The second lesson is that this survey, which was conducted by a professional and independent institution, confirms all earlier polls conducted in different places and at different times on the question of the Church’s traditional liturgy (see here). Let those that have eyes see; and those that have ears, hear. . . .

When one notes (see question 2) that 60% of Catholics are not aware of the Motu Proprio’s existence, one can easily imagine that the aforementioned 66.4% of Mass goers would increase if awareness of the MP were spread more broadly. . . .
3/ This study’s third lesson is the confirmation that in Great Britain too the overwhelming majority of the faithful find it absolutely normal for both forms of the Roman rite to cohabitate in peace in the parish setting.

This is not entirely surprising: British Catholics, long persecuted as “Papists,” are indeed particularly attached to the successor of Peter. In Great Britain as elsewhere, the wish of the faithful to see the Motu Proprio being applied seems in direct proportion to the opposition that the Pope’s texts elicits among most bishops. The hierarchy’s lack of awareness of the reality before it, brought out by this study, is noteworthy.

Only 21% of the Faithful find the peaceful coexistence of both forms of the Roman rite abnormal. This figure might be lower if more of the Faithful (i.e. more than the current 39.4%) knew the provisions in Benedicts XVI’s Motu Proprio. One can legitimately think that, among these 21%, there are some who believe what has been repeated to them for so long, namely that this liturgy had been “abrogated,” if not “forbidden” . . . .

In Great Britain as elsewhere, the argument resting on the lack of interest among the Faithful for the application of the Motu Proprio is unfair. When their point of view is solicited in an opinion poll, the results are quite different to those obtained when one merely speaks in their name . . . all the while taking care not to consult them, unless it’s through parish councils, which as a matter of principle (whether because of ideology, fear, or simple post-conciliar conservatism) are not inclined to favour the reform of the reform undertaken by Benedict XVI.
4/ Regarding the Agatha Christie Indult: from 1971 on it allowed the celebration of the 1965 Missal with the modifications of 1967 (as opposed to that of the 1962 Missal allowed in Summorum Pontificum and, before that, in Ecclesia Dei). One might have thought that this watered-down and modernised form of the John XXIII missal would have been more acceptable to the bishops of Britain and that it would therefore have helped spread a more traditional liturgy in the post-conciliar context . . . But such was not the case as the British bishops perceived no substantial difference between the 1965 liturgy and that of 1962. It is of course needless to press this point with too much insistence upon those who naively reckon that the celebration of the 1965 form would be more acceptable at the diocesan level than the 1962 form. There is likewise no need to mention the naïveté, which is in this case abysmal, of the few militants who are dead set on the celebration of the Paul VI liturgy in Latin . . . .
5/ Above all this new survey underscores the (in this case British) bishops’ astounding deficiency—to put the best face on it—when it comes to communication. Indeed, a full three years after the publication of the Motu Proprio on 7 July 2007, only 40% have been informed of it. In fact one must call a spade a spade, particularly in so serious a matter as liturgical and sacramental life: in Britain as elsewhere, the issue is pastoral blindness to the expectations of the Faithful. This blindness on the part of bishops has once again been scientifically measured and put into figures. It is tempting to wonder whether the bishops might not need a new pastoral Council entirely dedicated to listening skills for the benefit of the “Silent ones of the Church,” and to meeting their expectations.

The really interesting comment for me was the revelation that the percentage of those polled who were Catholics was so high about 1 in 7. Normally a figure of 10% is given for the percentage in our country. Unfortuneatly for the accuracy of the poll it was on line and for me this is not so good as outside contact..those that take the trouble to get on line are the only ones involved andd were they are all giving answers. Also the poll started with those over 18. If they had taken a poll from say 14 to 25 just on practice...you would not find anything like 32 per cent practicing.

I should love to believe that 43% of practising Catholics would attend a weekly TLM were it available, but I doubt the veracity of this figure.
At my parish, where there are nearly 500 souls at Mass each week, the TLM has been celebrated every Sunday for two years and the congregation at this Mass numbers about 60 people, some of whom come from outside the parish. This, I am sorry to say, is only 11%.

The question also presumes a Sung Mass, not Low Mass.

The question also presumes a Sung Mass, not Low Mass.

One small point directed at Michael Clifton. The phrase on line is a bad translation of the French. In fact it was a telephone poll, as most opinion polls are. This is a well proven method of polling.

6,153 telephone calls were made in order to identify 800 who claimed to be Catholic. This amounts to 13% which is a little high. There are two explanations. Some Anglo Catholics would have claimed to be Cathioic and there is always a slight tendency for people who are not answering honestly to give a positive answer. Having said that 13% is not too far out, and within the 4% error which should be allowed for in a sample of this size.

So EF at 10.30 am on the first Sunday of the month, NO for the others, is unlikely to even raise an eyebrow.