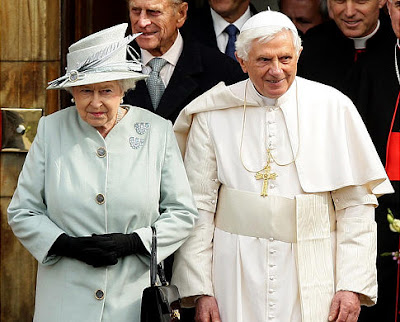 Some bloggers have expressed surprise at the Pope wearing Leo XIII's stole, either whincing or squealing with delight. Well lets not be so crass as to assume Benedict chose it only for one reason. Yes Leo did issue Apostolicae Curae but he also make Newman a Cardinal, I wonder if the stole might also have had a Newman connection.

The gift to the Queen I suspect was multilayered too: the giving of an ancient Book of the Gospels to a Protestant Queen, with all the significance that the Bible-giving has in the post-reformation Coronation Rite; a rich vein for anyone who wants to delve into it. Benedict is a man not only a man of words but of signs.

More interesting, I think, than haberdashery and velum is as Rocco Palmo points out is the extra-ordinary simularity between Benedict's speech at Holyrood and Newman's Biglietto speech. Benedict's words and actions are always multi-facetted, he is above all a man formed by the liturgy of sign, symbol and word, all of which are worth mulling over.
In the same post Palmo also presents L'Osservatore's assessment of the visit.

Now, anyone understand the symbolism of him asking for a Fanta when the Queen offered him coffee?
at September 25, 2010

Yes...the Papacy is sponsored by Fanta.

Did he get his Fanta?

Regarding symbolism I could not help noticing that whereas the Queen's present to the Pope was a facsimile of drawings by Holbein, the Pope gave the Queen an ORIGINAL early Bible.

That's easy! Coffee was declared a Christian beverage in 1600 by Pope Clement VIII. One of the aims of Clement's papacy was to free the papacy from its dependence on Philip II of Spain. Philip II of Spain was the widower of Mary Tudor and was the king who launched the Armada. In rejecting Clement VIII's coffee in favour of Fanta (possibly orange-flavoured, thus signifying Seville oranges), Pope Benedict may have been subtly distancing himself from Clement's attitude to Philip and hinting at the need for the conversion of England...

(Orange - citrus flavored, for those of you not East of the Atlantic. And no caffeine.)

"Fanta was the creation of a German-born "Coca-Cola Man", Max Keith, who was acting without direction from the Third Reich or from Atlanta, Georgia. Keith, the CEO of the German plant, was merely trying to preserve the Coca-Cola company's assets as well as protect its employees by way of keeping local plants open and operating. In his own attempt to save the German plant....Fanta was born in 1940.


Keith needed a product to keep the plant in operation and devised a fruit flavored drink made from available ingredients. Using apple fiber remaining from cider pressing and whey, a byproduct from cheese manufacture, Fanta was created and became quite popular. The original German Fanta had a yellow color and a different flavor from that of Fanta Orange. The flavor varied throughout the war, depending on the ingredients used.

The name 'Fanta' was coined during an employee contest to name the new beverage. Keith told them to let their Fantasie (German for "imagination") run wild. On hearing that, salesman Joe Knipp spontaneously arrived upon the name Fanta.

Max Keith could have let the German plant close down and bottled Fanta on his own due to the fact that he acted alone in it's invention. But instead of caving in to the pressures of becoming a Nazi, he kept the plant alive and welcomed Coca-Cola back to its German operations after World War II. And, although Keith could have made a fortune selling Fanta under his own name, he turned over all of the wartime profits, as well as the new soda, to Coca-Cola."

Being a foreigner, I noted with interest that the Queen mentioned "freedom of religion" in her speech, yet no commentator took note of this. How come? Do the English consider this statement just a platitude?

You know, when you've been tangoed!!!

Not sure of the after effects with fanta though?

Love the picture..may borrow it!

Perhaps it was an oblique reference to Catherine De Braganca's request for tea, when she arrived first on these shores. The English could not comply, so offered her beer instead.

Fanta is to oranges as Budweiser is to beer.