Pope Speaks on Apostolic Journey to the United Kingdom 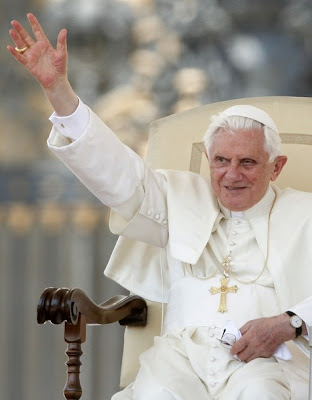 Dear Brothers and Sisters in Christ,

As you know, I have just returned from my first Apostolic Journey to the United Kingdom, and I wish to send my affectionate greetings to all those I met and those who contributed to the visit through the media during four days, which have begun a new and important phase in the long-standing relations between the Holy See and Great Britain.

Last Thursday, I was honoured by the warm welcome of Her Majesty The Queen and the Duke of Edinburgh in Scotland’s historic capital Edinburgh. Later that day, I celebrated Mass in Glasgow in the presence of many bishops, priests, religious and a great concourse of the faithful against the backdrop of a beautiful sunset at Bellahouston Park, within sight of the place where my beloved predecessor celebrated Mass with the Scots twenty-eight years ago.

Upon arriving in London, I met thousands of Catholic students and schoolchildren at a very joyful celebration, reminding all of us of the excellent and essential work being done by Catholic schools and teachers throughout the land. I then had the pleasure of meeting the clerical and lay representatives of different religions and of discussing the search for the sacred common to all men.

Later, I had the honour of calling upon His Grace the Archbishop of Canterbury who has come on several occasions to meet me in Rome. Our meeting at Lambeth Palace, in the presence of the Bishops of the Church of the England, was very cordial and fraternal. I then crossed the river to Westminster where I was given the unprecedented opportunity to address both Houses of Parliament gathered in Westminster Hall on the importance of a fruitful dialogue between religion and reason, a theme as relevant in the time of Saint Thomas More as it is in our own day. Finally that day, I had the privilege of kneeling in prayer with the Archbishop of Canterbury at the Tomb of Saint Edward in Westminster Abbey, and of giving thanks to God with the Archbishop, the Moderator of the Church of Scotland and other British Christian leaders, for the many blessings God has bestowed upon our efforts to re-knit the fabric of our Christian fellowship.

The next morning, I had the pleasure of greeting Prime Minister David Cameron, Deputy Prime Minister Nick Clegg and Ms Harriet Harman, leader of the Opposition, before celebrating Mass in Westminster Cathedral, with a liturgy evocative of the best of the English musical tradition in the celebration of the Roman rite. That afternoon, I was welcomed very cordially by the Little Sisters of the Poor and the elderly people they look after. There I also had the chance to thank and encourage those charged with the safeguarding of children in Britain. That evening I participated at a beautiful vigil of deep prayerfulness and stillness at Hyde Park with tens of thousands of the faithful.

On Sunday morning, I travelled to Birmingham where I had the joy of celebrating the Beatification of Cardinal John Henry Newman. Later that day, after a warm and fraternal meeting with all the Bishops of Britain, I was bidden farewell by Prime Minister Cameron during a very cordial speech at Birmingham International Airport on the Government’s wish to build a partnership for development with the Catholic Church and others.

Sunday, then, was a moment of deep personal satisfaction, as the Church celebrated the blessedness of a great Englishman, whose life and writings I have admired for many years and who has come to be appreciated by countless people far beyond the shores of his native land. Blessed John Henry Newman’s clear-minded search to know and express the truth in charity, at whatever cost to his own personal comfort, status and even friendships, is a wonderful testimony of a pure desire to know and love God in the communion of the Church. His is surely an example that can inspire us all.
at September 22, 2010

Thanks for sharing the Pope's words about his wonderful visit to the UK with us. He deserves a good rest after his great evangelisation single handedly of our nation. Well done Benedict!

Father, the Mass for the Beatification of Cardinal Newman was truly splendid and personally uplifting for a reason mentioned earlier. Yet, perhaps oddly, for us it was not the most exciting moment.

Our family spent a great deal of Monday watching the various events(stopping, of course, for luncheon and afternoon tea). We all agreed that the most uplifting moment was when the Pope was greeted by a young man outside Westminister Cathedral. He was brimming with joy and his affection for the Pope was so sincere that he could hardly contain himself. What was equally exciting was the reaction of Pope Benedict who was positively beaming. One could be forgiven for believing that their energy literally flowed through the television set.

I was fortunate enough in being able to attend the Papal Mass and Beatification of Cardinal Newman in Birmingham , and I can honestly say that I have never been so moved in my entire life, and I will treasure the memories of this day for the rest of my life .