And so to Africa 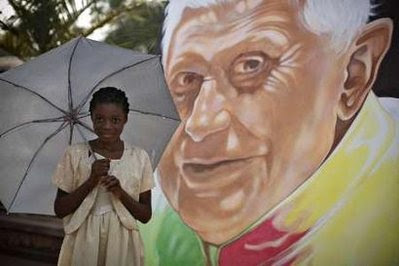 A picture of the Holy Father in Cameroon's national colours, outside the Mary Queen of Apostles Basilica in Yaounde March 15, 2009, where Pope Benedict will celebrate vespers on March 18. Pope Benedict this week makes his first trip to Africa, starting in Cameroon, where he will urge developed nations grappling with the economic crisis not to forget the continent where survival is a daily struggle for millions. In the 20th century Africa's Catholic population shot up from about 2 million in 1900 to about 140 million in 2000, making the continent ever more important to the Vatican as the number of practicing Catholics in the developed world declines.
The Pope Leaves for Africa tomorrow, presumably he is packing today.
at March 16, 2009

Statistics can tell us some things and I expect that the number of Catholics in Africa attending Mass on Sunday is considerably higher than in most of Europe, North America and Australasia.

Pope Pius XI referred to Uganda as 'the pearl of all the missions in the world' and the acceptance of the Faith there was and is staggering. To be received into the Church aspirants spent several years receiving instruction and being tested. Books by Fathers Howell WF and Gerard Rathe WF indicate the religious depth of peoples in Africa. Father Howell wrote in 1938 that Africa appeared to be accepting the graces that Europe was rejecting. Can one speak of someone being ahead of his time?